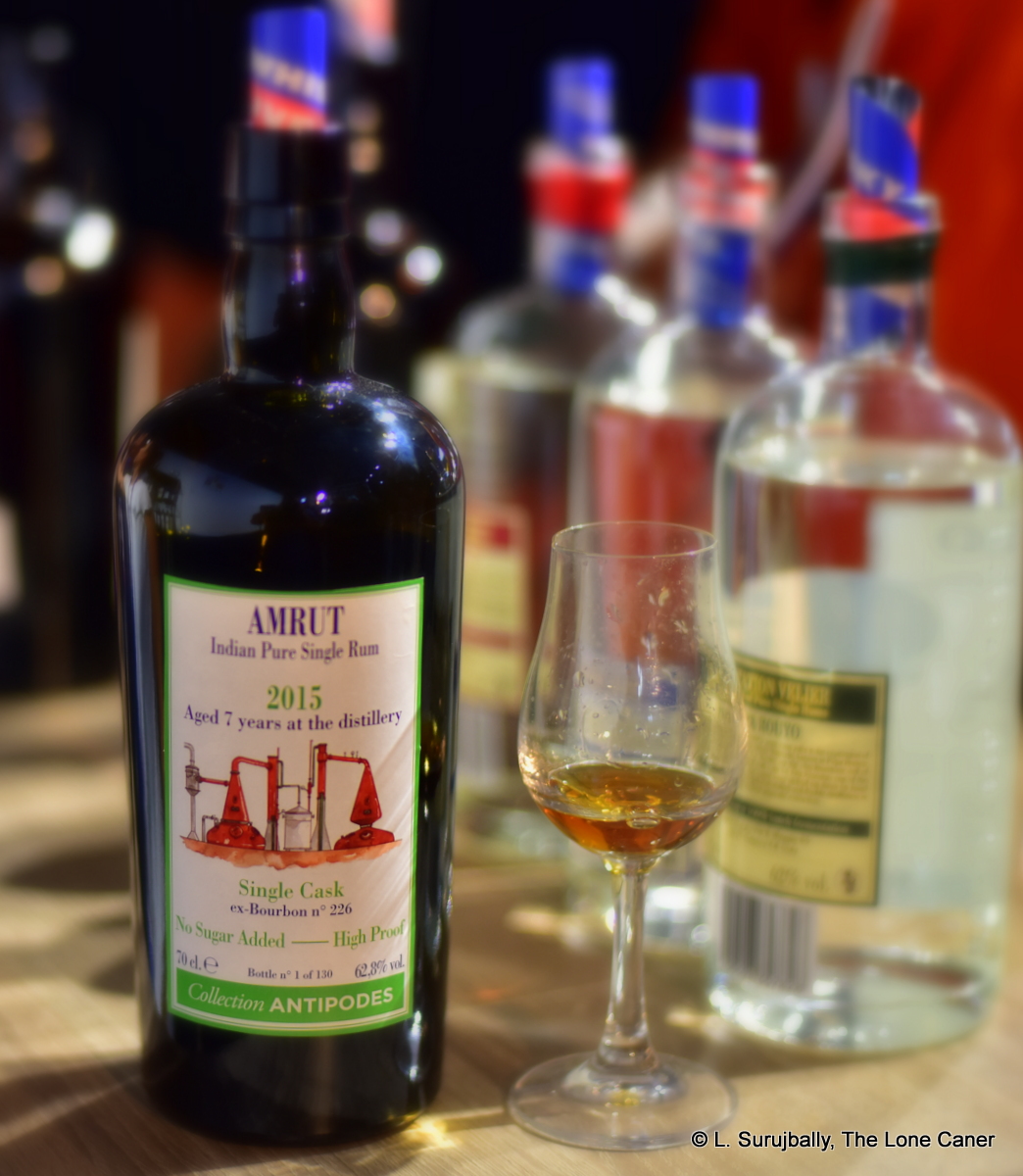 Even after the decade I’ve spent writing about Velier’s rums, the company still manages to pull a rabbit out of its hat and surprise me when I least expect it, and the new Habitation Velier Amrut rum from India is this year’s contender for the rum I most wanted to try, the moment I saw Steve Magarry’s post about it on FB in September of 2022 (it popped up at Paris’s WhiskyLive a week later). Because, consider what a singular rum this is, and how many fascinating strands of the rum world it pulls together:

It’s a pot still rum, from the HV line (which as you know, I consider a hugely important one) and an intersection with La Maison du Whisky’s “Antipodes” line of spirits – and therefore suggests, as the Indian Ocean series also did, that there is a move by independent bottlers to go further afield to new and unexplored territory in sourcing their barrels1.

In that vein, then, it’s also the only independent bottling of a rum from India itself that has crossed my path since Alt-Enderle’s “India” rum from Germany, back in 2014 (and that one was questionable). And it’s also not made by some no-name, just-opened small distillery with a single small pot still run by a pair of young enthusiastic backpacking European exiles, but a major whisky making house (one that my buddy in Calgary, Curt Robinson, just loves) which makes a popular rum line of its own. 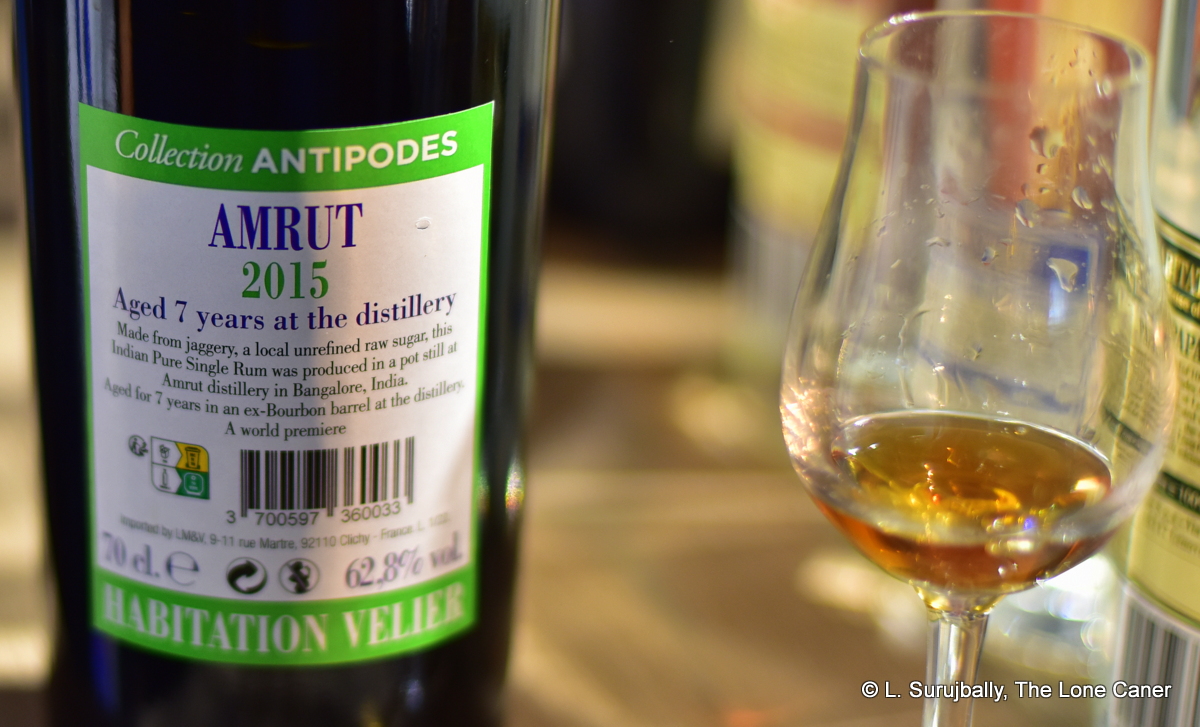 Thirdly, and perhaps as important, it highlights an emergent (and still relatively small) trend towards using other sources of sugar cane and its derivatives to make rum – in this case it’s not juice, not molasses, not vesou or ‘honey’, but the unrefined, nutrient-rich sugar known as jaggery. We have met it before from India and always from the same company that makes this rum: Amrut (though I sometimes suspect Old Monk from Mohan Meakin may also use it). And yet even to say jaggery is only used (or made) in India is incorrect, because unrefined sugar of this kind is made around the world. In the Philippine Cordilleras it is inti, in Malaysia it is known as gula melaka and Thailand as namtan tanode; it’s used in making kokuto shochu in Japan and charandas in Mexico (where it called panela), and in both these latter cases the resultant is, while recognizably a rum, also different and completely fascinating.

Years ago I heard stories about Luca wandering around India when the Indian Ocean series was being assembled in 2018, and there were always rumours that the series was never meant to be just two bottlings: but he never found the proper rums from major distilleries in India that he felt warranted inclusion – they were not pot still, not interesting enough, had additions, were too young, or whatever. Yet clearly he had identified something at that stage and it was simply not ready then, because the Bangalore-based distillery of Amrut gave him a single barrel of pure jaggery-based rum to bottle in 2022, and this is it. Pot still, 62.8%, 7 years old, ex-bourbon barrel aged, aged in India. And it’s really quite something.

If aroma had a colour, I’d call this “gold”. It smells like a warm tropical evening with the dappled and fading light breaking through the trees in orange and yellow-brown. It’s a high ABV rum, sure, yet all one gets on that nose is ease and relaxation, molasses, vanilla, coconut shavings, coffee grounds, some freshly sawn wood and the firmness of an anvil wrapped in a feather blanket. There are also some fruits hovering around the edges of awareness – a mix of oranges, sugar cane, fleshy stoned fruit (very ripe) and spices like cumin, cinnamon and thyme held way way back, with just enough making it through to tease. It’s one of those rums that invites sustained nosing.

The taste presents more crisply, with somewhat more force, which I argue is exactly the way it should be. Like other Indian rums I recall, it shows off honey, maple syrup, licorice for the sweet stuff, then balances that with the freshness and tartness of pineapple, strawberries, ripe peaches and apricots a fat ripe yellow mango bursting with juice, and an intriguing line of spices (cumin and cinnamon), minerals and light ashiness that together are just different enough to excite, while not so strong as to derail the experience. Attention should also be drawn to a really nice and long finish, which has the sweet and salt of a caramel-laden latte, but is mostly musky and fruity, with some cinnamon, brine, light florals and brown sugar. 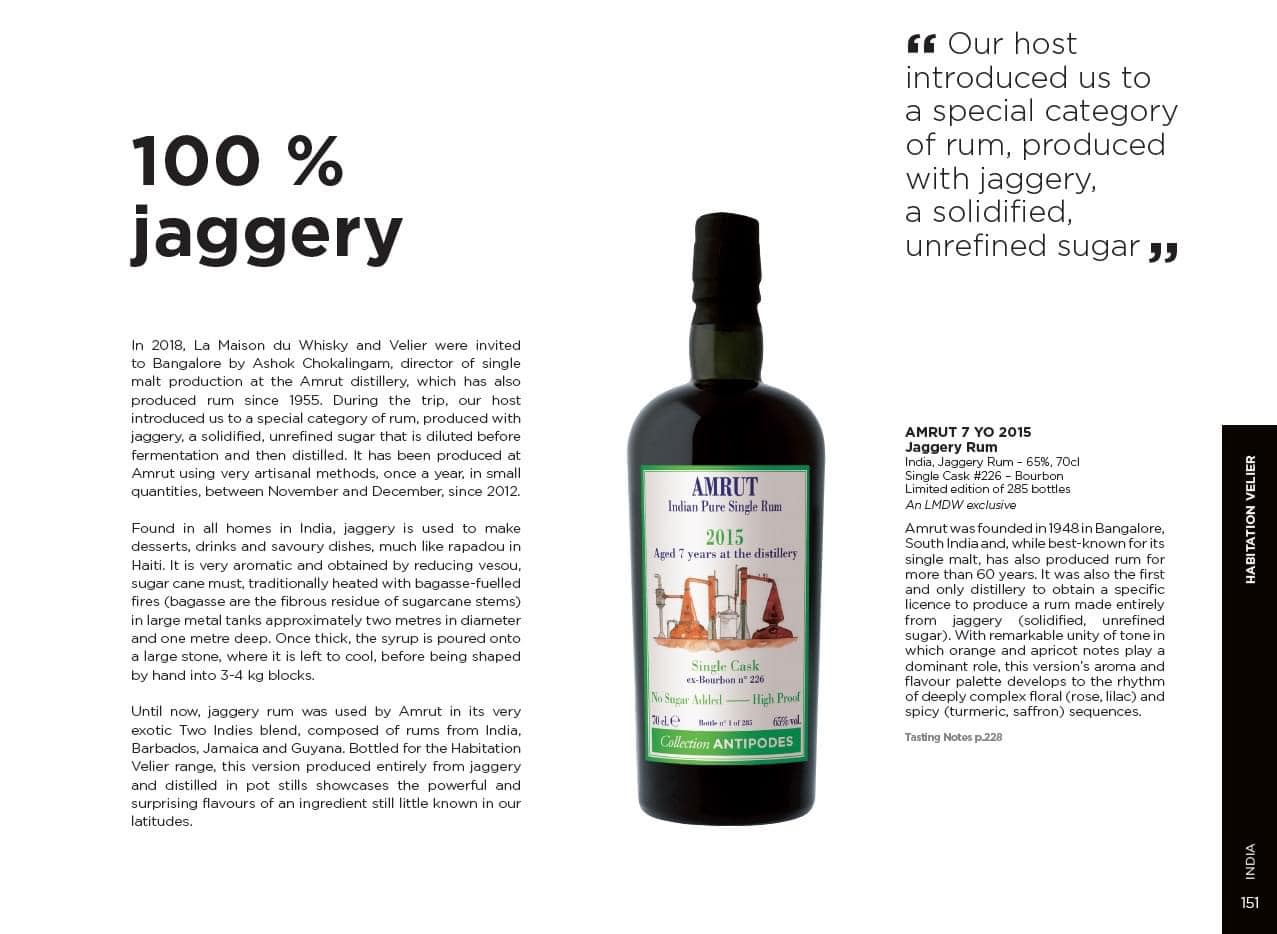 A rum like this has to navigate a fine line, since it is not made for indigenous consumers or drinkers from the diaspora — like Amrut’s Two Indies or Old Port Deluxe (or the Old Monk itself, for that matter) — in a region where additives and spicing up do not attract quite the same opprobrium as they do elsewhere. It’s aimed at a western audience which is likely to be unfamiliar with such products and has its own criteria, and so an unadded-to spirit which is clearly a rum is a must…yet at the same time it must also present its own artisanal nature and country’s distilling ethos to show its differences from western-hemisphere rums. It can’t be just another Caribbean rum-wannabe, but its own product, made its own way, hewing to its makers’ ideals and own local tastes.

By that standard, all I can say is it succeeded swimmingly. I thought it was an amazing, new, fresh and all-round tasty rum, one that was familiar enough to enjoy, strange enough to enthral, flavourful enough to remember (and then some). Taste, complexity, balance, assembly, they were all quite top notch. It was a rum I wish I could have had more of right there. Habitation Velier’s Amrut may not point the way to a third major source of rum raw materials, and never be more than a niche market product as it is – rum folks are as clannish as the Scots when clinging to their favourites – yet I think we may be witnessing another front being opened in the ever widening battle to make rums more interesting, more global, more unique — and, at end, perhaps even more respected. At the very least, even if none of those things appeal or interest you, try the rum itself, just for itself, as it is. It’s really damned fine.