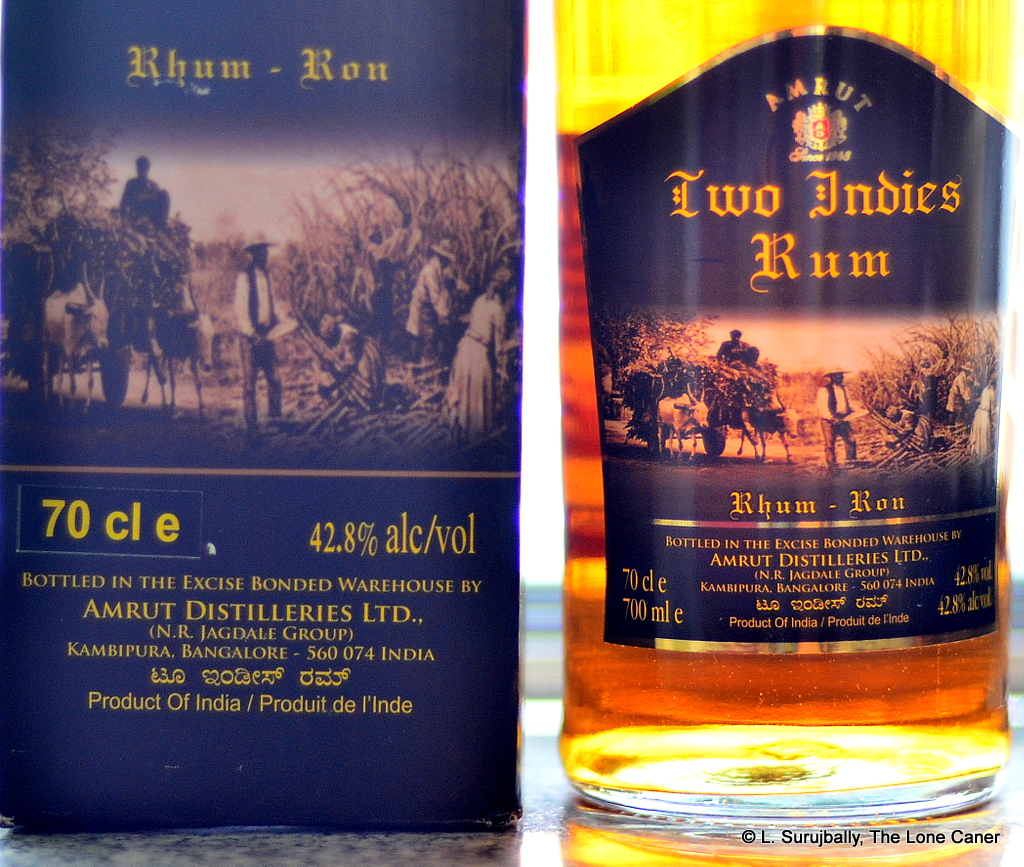 Amrut, that Bangalore company which makes the Old Port rum I tried many years ago, as well as whiskies many swoon over, is no stranger to making rums, but their marketing effort is primarily aimed at the subcontinent itself, and perhaps other parts of Asia (maybe they’re chasing Old Monk, which was once the #1 rum in India).  There’s not much of a range (five rums in all), and I rarely saw any of them in Canada – this one was bought in Europe.  Given that this particular rum is a blend of – get this! – Jamaican, Bajan, Guyanese and Indian pot-still rum, one can perhaps be forgiven for asking whether they’re going in the direction of Ocean’s Atlantic Rum; and as far as I was concerned that one suffered from overreach.  But at least we know where the “Two Indies” moniker derives, if nothing else.

It’s also worth commenting on one thing: the Indian component of the rum is supposedly a pot still originating distillate based on jaggery, which is a natural sweetener made from sugar cane…whose by-product is molasses so one wonders why not just go there and have done, but never mind.  The issues (not problems) we have are two fold: firstly, jaggery is actually made from either sugar cane or the date palm, so I’m unsure of which variation is in use here (since sugar cane jaggery is cheaper, I’m putting my money there); secondly, assuming the jaggery is from cane, it is in effect a reduced version of sugar cane juice – a syrup – what we in the West Indies and parts of South America sometimes refer to as “honey”. So in effect there’s nothing particularly special about the matter except that its source product is made in Asia and widely known there.  And, of course, the marketing, since it suggests a divergence and distinction from more familiar terms. 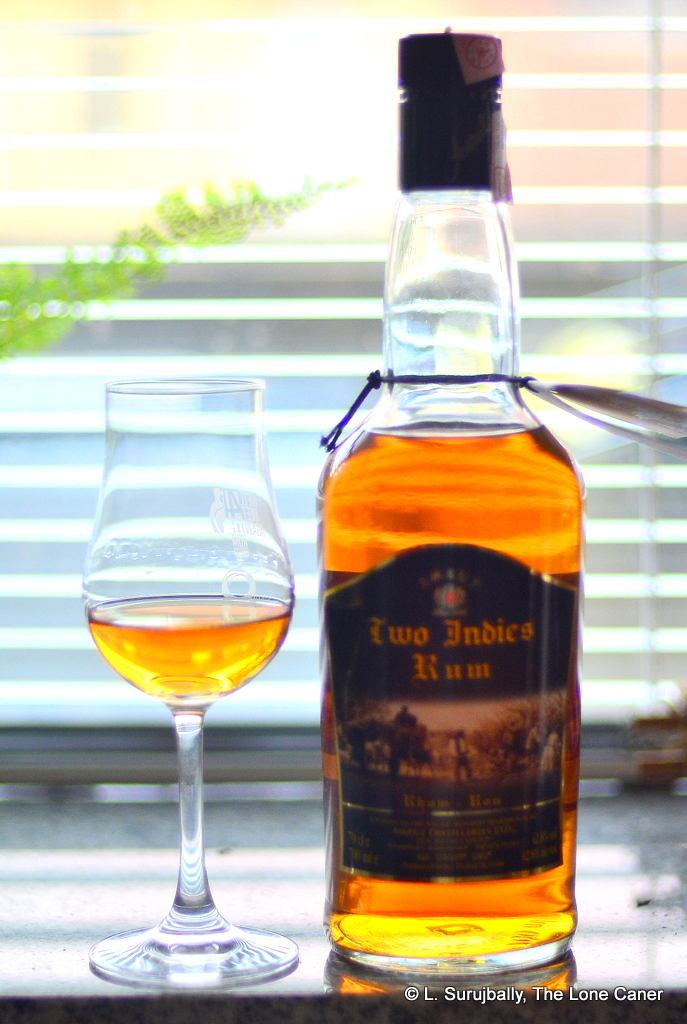 Anyway, all this preamble leads inevitably to the question of whether that basic ingredient lends a difference to the profile, the way for example a “maple syrup rum” would (and yes, there is such an abomination). I don’t really think so – the difference in taste and smell I noted seemed to be more a product of the entire geographical environment, the way a Bundie is linked to Australia, and Dzama is Madagascar and Ryoma is Japanese.  I’m not saying I could necessarily taste it blind and know it was either from India in general or Amrut in particular – but there were differences from more traditional Caribbean or Latin American rums with which we have greater experience

Consider first how it smelled.  The nose began by presenting a sort of lush fruitiness that spilled over into over-ripe, almost spoiled mangoes, persimmons and sweet tropical fruit and kiwi, something also akin to those cloying yellow-orange cashews the snacking nuts are made from (not those with the stones inside).  In the background there lurked caramel and vanilla, some cloying sweet and also breakfast spices (cloves and maybe nutmeg mostly, though very light) just as the Old Monk had; and overall, the aromas were heavy and (paradoxically enough) not all that easy to pick out – perhaps that was because of the inoffensive 42.8% ABV it was bottled at.

I liked the taste a lot better, though that queer heaviness persisted through what ended up as a much clearer rum than I had expected.  So, bananas, more of the mangoes and cashews, honey, papayas, and the spices.  Adding some water released some chocolate and coffee, nutmeg, more vanilla and caramel, maybe some light molasses, some licorice, a nice twist of citrus rind, which I liked – it provided an edge that was sorely needed.  Finish was soft and quick, reasonably clean and warm, but was mostly the spices and caramel than anything else.

Reading around doing the usual research (and there is really not very much to go on so I have an outstanding email and a FB message sent out to them) suggests there are no artificial flavours included: but I dunno, that profile is quite different, and the breakfast spices are evident, so I gotta wonder about that; and the overall mouthfeel does suggest some sugar added (no proof on my side, though).  This doesn’t sink the drink, but it does make for an unusual  experience.  You’re not getting any Jamaican funk, Guyanese wooden stills or easier Bajans, nor any of that off-the-wall madness of an unaged white popskull.  It is simply what it is, in its own unique way.

On balance, a decent enough drink. I liked it just fine, though without any kind of rabid enthusiasm – it was from somewhere new, that’s all. You could drink it neat, no issues. Personally I thought the flavours were a mite too heavy (it stopped just short of being cloying) and meshed rather clumsily in a way that edged towards a muddle rather than something clearer and more distinct that would have succeeded better.  Much like the Tanduay, Mekhong, Tuzemak, Bundie or even the Don Papa rums, I suspect it is made based on a local conception of rum, and is for local palates.  Add to that the terroire concept and you can see why it tastes so off-base to one weaned on Caribbean tipple.  There’s a subtle difference from any of the British West Indian rums I’ve tried over the years, and though the Two Indies is a combo of several nations’ rums, I can’t separate the constituents and tell you with assurance, “Oh yeah, this comes from Foursquare” or “That’s Hampden” or even “PM!”  (and no, I don’t know whether these were the constituents).

So, they have used jaggery rather than molasses to make it, blended their way around a mishmash of profiles, and while I liked it and was intrigued, I didn’t believe all that was really needed and may even have made it less than its potential.  In Guyanese creole, when we see that kind of thing showing itself off as an artistic blending choice we usually smile, grunt “jiggery-pokery” and then shrug and fill another tumbler.  That pretty much sums things up for me, so I’ll leave it to you to decide whether that’s a compliment or not.

The rum makes no mention of its age, and nothing I’ve unearthed speaks to it.  That was also part of my email to Amrut, so this post will likely be updated once I get a response.