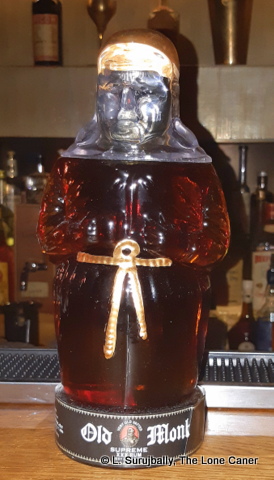 That’s unfortunate — because we should pay attention to other countries’ rums.  As I remarked in a rambling interview in early July 2020, concentration on the “Caribbean 5” makes one ignore other parts of the world far too often, and make no mistake, rum really is a global spirit, often indigenously so, in a way whisky or gin or vodka are not.  One of the things I really enjoy about it is its immense variety, which the Old Monk, Dzama, Batavia Arrack, Bundaberg , Mhoba, Cor Cor, Juan Santos and Bacardi (to list just a few examples from around the world) showcase every bit as well as the latest drooled-over Hampden or Foursquare.

Which is not to say, I’m afraid, that this rum from India deserves unstinting and uncritical accolades as some sort of natural backcountry traditional spirit made in The Old Way for generations. To begin with, far too little is known about it.  Leaving aside the very interesting history of the Indian company Mohan Meakin, official blurbs talk about it being made in the “traditional manner” and then never say what that actually is. No production details are provided, either on the bottle or the company website –  but given its wild popularity in India and the diaspora, and its massive sales numbers even in a time of demise (2016 – ~4 million cases) it suggests something made on a large scale, with an ageing process in place. Is it truly a blend of various 12 year old rums, as some sources suggest? No way of knowing, but at the price point it sells for, it strikes me as unlikely. Beyond that and the strength (42.8% ABV), we have nothing.

That means we take the rum as it is almost without preconceptions, and indeed, the initial notes of the smell are promising: it’s thick and solid, redolent of boiled sweets, caramel bon bons, crushed walnuts, bitter cocoa, coffee grounds, ashes, molasses, brine, even some olives.  But it’s too much of the sweet, and it smells – I’m choosing this word carefully – cloying.  There is just too much thickness here, it’s a morass of bad bananas, sweet molasses and brown sugar rotting in the sun, and reminds me of nothing so much as jaggery, such as that which I recall with similar lack of fondness from the Amrut Two Indies.  But as a concession there was a bit of brine and clear cane juice, just insufficient to enthuse.

The sensation of thickness and dampening was much more pronounced on the palate, and I think this is where people’s opinions start to diverge.  There’s a heavy and furry softness of texture on the mouthfeel, tastes of molasses, coffee, cocoa, with too much brown sugar and wet jaggery; it reminds me of a hot toddy, and I don’t say that with enthusiasm.  It’s a cocktail ready-made and ready to drink, good for a cold day and even a citrus hint  (which rescues it from being a completely cloying mess) doesn’t do enough to rescue it from the bottom of the glass. And the finish, well, noting to be surprised at – it’s short, it’s sweet, it’s thick, and it’s thankfully over very quickly. 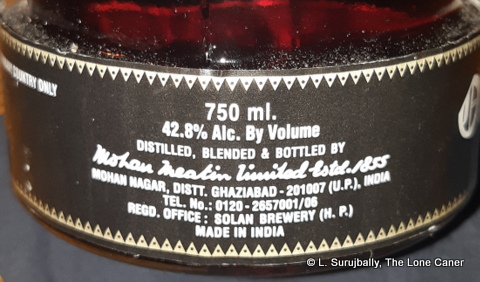 I can’t rid myself of the feeling something has been added here.  Sugar, caramel, spices, I don’t know. Wes at the FRP did the hydrometer test on it and it came up clean, yet you can’t taste this thing and tell me it’s as pure as Caesar’s Jamaican wife, not even close. In point of fact, though, what this rum reminds me of is its cousin the Amrut Two Indies, the Nepalese Kukhri (though not as sweet), a low-end Jamaican Rum (Myer’s, Appleton V/X maybe, or even a less interesting el Dorado 12 Year Old.  Because of the profile I describe, it can certainly be had by itself or mixed into a sugar-free cola very nicely and therein lies, I suspect, much of its appeal as a spirit in Asia.

In Asia maybe – but not in Europe. The bartender at the Immertreu Bar in Berlin showed some surprise when I selected it from his back shelf, and shook his head with evident disappointment. “For this, you don’t need a tasting glass” he sniffed, not even bothering to hide his disdain.  And after I had smelled, tasted and tried it, then looked askance at the glass, he shrugged…”I told you so.” He didn’t understand that had to try the rum whether or not I believed him, but to be honest, this was one of those occasions where I wish I had listened harder.  Back in the 1970s and 1980s Old Monk may have outsold all other brands in India, and ten years later could even price itself higher than Bacardi in Germany, and outsell it….but those glory days, I’m afraid, are gone. The world has moved on. Old Monk hasn’t, and that’s both its attraction and its downfall to those who try it for the first time, and go on to either love it or hate it. Few of these, however, will remain completely indifferent.