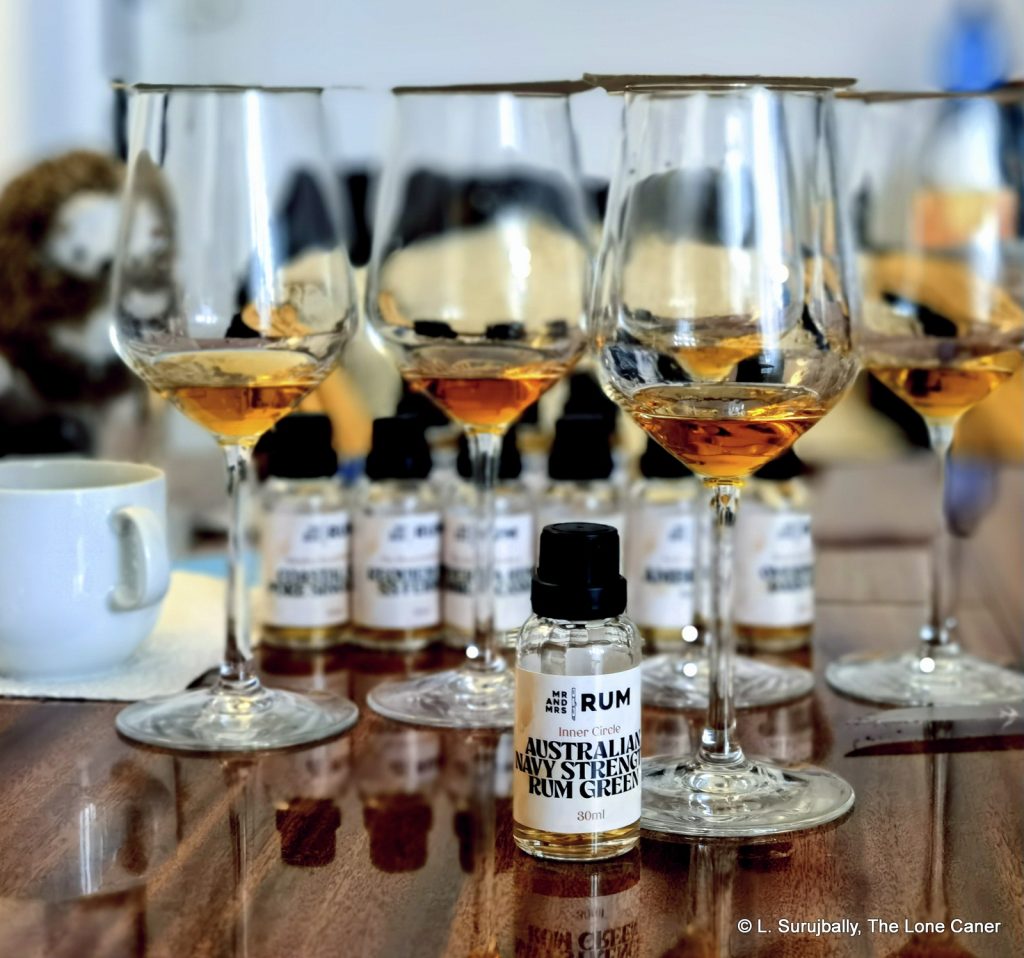 It’s been a few years since I last looked at Beenleigh’s Inner Circle rum from Australia, and while that iteration from around 2004 was the same strength as this one — 57.2% — there are several differences between it and the current version. For one, it is no longer named “Overproof” but “Navy Strength” (incorrectly, in my view, but maybe that’s just semantics), and uses molasses from three separate sugarcane regions along the east coast of Australia 1 to produce its own distillate from Beenleigh’s column and pot stills, while back in the day it was (supposedly) pot still distillate from Fiji. Too, the older rum was aged just about two years, and the new one sports five – both slept in ex bourbon casks – and is now topped off with a smidgen of Beenleigh’s “best ten year old”. The green dot on the label, a heritage design item reflecting the strength of the rum, remains, which is nice.

All of this is fairly basic, and for those who want something deeper, I include more historical background after the review, including what the coloured dots are all about. For the moment, it should simply be noted that I had not been particularly impressed with the earlier Inner Circle Rum, commenting rather acidly that it was “as vague as a politician’s statements,” and was surprisingly mild for something at such a strength, with faint tastes that left me rather indifferent.

No such issues afflict this one, which asserts a formidable nose that reeks nicely of dust, sawdust, some acetones and a smorgasbord of fruits from all over the map. The aromas range from a mild raspberry yoghurt, squishy yellow mangoes, dark and ripe cherries, to a dusty and somewhat woody background dusted over with pine needles, some tannins, toffee and vanilla. Plus there’s ice cream, pears, coca cola and even some freshly-ground coffee beans, all of which is reasonably distinct, front-facing and not at all meek and mild. 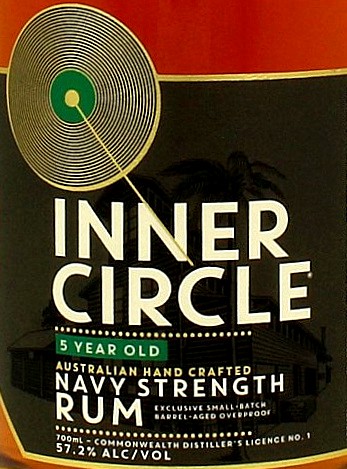 The taste is thick, fruity and nicely aromatic, and just a bit spicy – for a five year old it is therefore entering sipping territory if one judges solely on mouthfeel and stays there if it’s taste that’s your criterion. First off there’s the thick herbal-sweet aroma of damp tobacco leaves, fresh coffee and very strong black tea into which an inordinate amount of condensed milk has been dunked (this used to be one of my favourite “food-drinks” as a student, and I remember it well). The fruits are also well represented, musky and sweet fleshy ones – pears, sapodilla, kiwi fruit, overripe bananas, and apricots. With some effort one can make out blueberries, vanilla and some chocolate, not much more, and a citrus tang is oddly absent throughout. The finish is quite pleasant and gives a soft send off, redolent of some brine, dark fruits, raisins, vanilla, cinnamon and a mild touch of wet sawdust.

Overall, it’s a pretty good five year old. While not a complete success as a sipping rum, it remains more than good enough for Government work: its minor drawbacks are the relative simplicity, some tastes that don’t entirely gel, and the occasionally rough heat which has not entirely been sanded down by the oak (it succeeds better with a touch of water to tone it down). Beenleigh has its own flagship rums and this is an old brand name with some heritage and history that came through a convoluted road to their distillery, so it may succeed better in Australia, where memories and tradition ensure a certain familiarity with the product, than in other countries which don’t know anything about it.

Other than that, there’s no real reason for avoiding the rum if a slightly different taste profile is what you’re looking for to wake up your latest cocktail, you don’t want to spend a huge amount of money to get something interesting, and are curious about an aged rum from Down Under. This one fits the bill nicely on all of those.

Inner Circle was originally made by a now-defunct company called the Colonial Sugar Refinery, which had a long history pretty much unknown outside its country of origin. Formed in 1855, CSR established refineries in Australia, New Zealand and Fiji by the 1890s, and in 1901 they opened a distillery in Sidney, using pot stills to make rums from Fijian and Australian cane. The Inner Circle brand name, which first appeared in 1950, came from the limited high-quality rums they made for distribution to the favoured elite of the company and its clients, and around 1970 it got a broad commercial release in Australia: at that time it was bottled in three strengths, which in turn were identified by coloured dots – Underproof (38-40%, the red dot), Overproof (57% or so, green dot) and 33% Overproof (73-75%, black dot).

The distillery was sold off in 1986 to Bundaberg and the brand disappeared, though CSR remains as a company involved in manufacturing of building products, no longer rums. The Inner Circle brand was resurrected in 2000 by Stuart Gilbert (the Australian Olympic yachtsman) in concert with Malcolm Campbell, one of the distillers of the company who had the original recipe, and I believe they did so with the financial backing of the Australian VOK group, which also took over the Beenleigh Rum Distillery in 2003. The rums was un-retired and is now a Beenleigh product, thought it seems to be kept as a separate brand and line of rums from their regular releases, judging from their individual and separate websites.