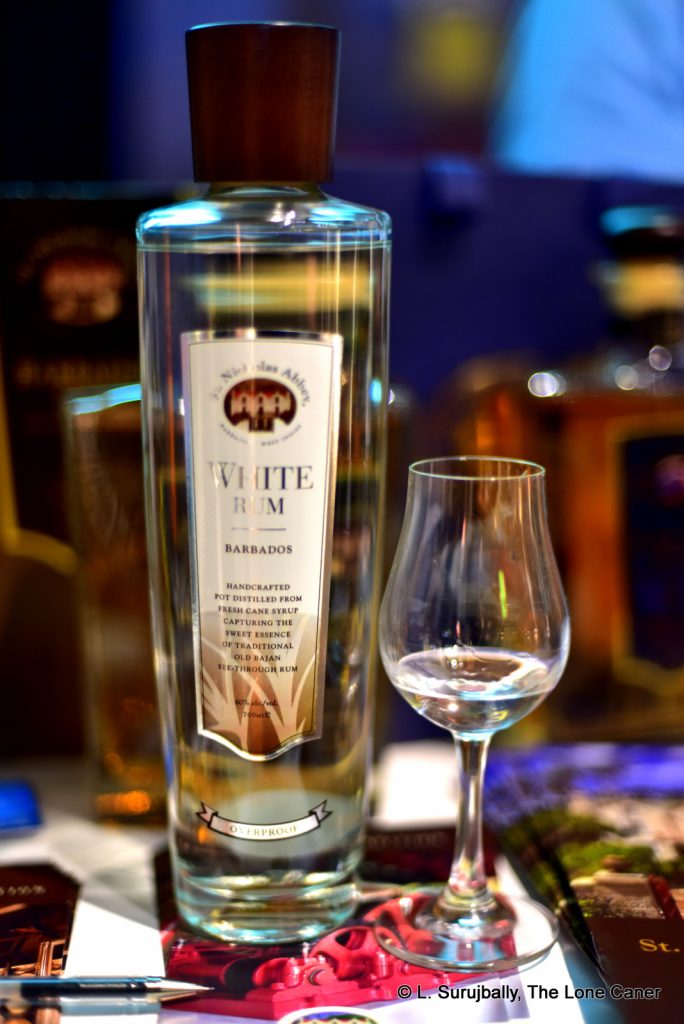 It’s been years since I looked at any of the rums of Barbados’s boutique micro-distillery, St. Nicholas Abbey. This is not for want of interest, really – just opportunity. Plus, I had enthusiastically reviewed most of the original three-rum 8–10–12 YO lineup (later expanded to five with the additions of the 5 and 15 YO), and felt no immediate need to search for and buy and try progressively aged and more expensive expressions like the 18, 20 and 23 year-olds that kept on coming out the door at standard strength – sooner or later one of them would cross my path, I told myself.

As the years progressed they remained at the back of my mind, however, and after 2017 I got interested all over again. Because in that year they released the 60% overproof white —  and since I had quite liked the original 40% version tasted the year before, with its cane juice and pot still origins, intriguing taste and gentle complexity, I hastened to try the OP at the first opportunity (which came at the 2022 TWE Rumshow). The overproof white is, like its lesser-proofed sibling, made from rendered cane juice (‘syrup’) then run through the pot still before being allowed to rest for three months in inert tanks, and then bottled – the current crop of 40% and 60% whites derive from the same source, it’s just that one is reduced and the other isn’t – otherwise, they are identical.

The standard white I tasted in 2016 had teetered on the edge of untameability, and walked a fine line between too little and too much. It was original, yet still felt something like a work in progress where the final vision had yet to snap into focus more clearly; this one was quite a bit better and it wasn’t only the extra proof.  The thing smelled like a whole lot more was in there: sweet vanilla, sugar water, raspberries, cherries, and very little of the briny paraffin wax and floor polish that had marked out its predecessor.  That was present, I hasten to mention, just kept firmly in the background, allowing the fruity flavours and congeners their moment to shine.

The palate was also well assembled, and holds up well; creamy hot sweet vanilla-flavoured cocoa drizzled over a four-fruit ice cream – let’s say mango, cherry, cranberries and pineapple. It didn’t come with a ton of complexity – it was not that kind of rum – what I got was, however, more than sufficient for Government work, and it was firm and warm and intense enough that I could sip it and get something reasonably complex, and near-delicious without having half my glottis abraded. The finish was suitably long and near-epic, mostly light fruits in a salad, some breakfast spices, a touch of cumin, and a green apple slice or two.

Clearly St. Nicholas Abbey have not rested on their laurels since I first ran across their wares back in 2011, or even since I sampled the initial white they made. The profile of the overproof is one that continues to work well for a rum that can be both mixer and sipper, and it straddles the divide neatly.  Best of all, it’s well made enough that it never seems to be a binary decision, but one that’s entirely up to the drinker and will satisfy either way, because it’s one of those rums with the “overproof” moniker that doesn’t have to be endured, just enjoyed.