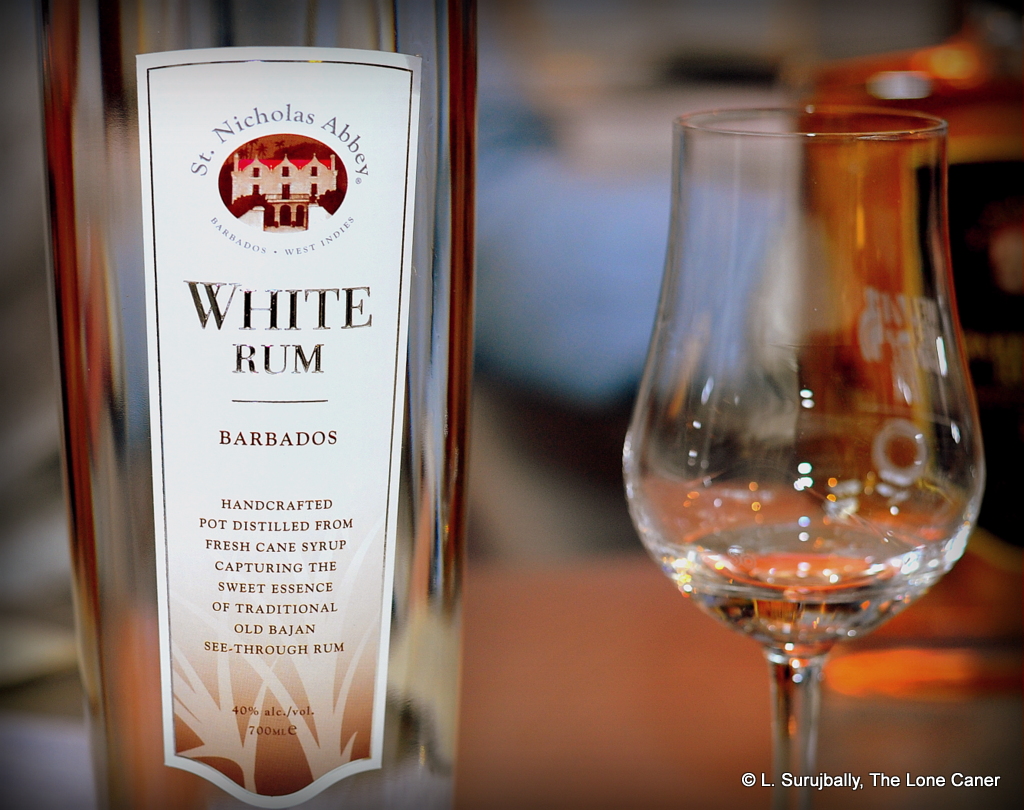 A tasty, unaged, pot-still white rum, which St. Nicholas Abbey seems to have made while in a playfully experimental phase.

So there I was last week, reading through my notes and writing unenthusiastically about the 3 year old “Real McCoy” white rum from Barbados, which found little favour with me.  But consider this unaged counterpart made right up the road from St. Nicholas Abbey, also issued at 40%, also a white and in just about every way a superior product.  What could account for such a difference? Well, part of it is the lack of filtration, another is the source – it is a full pot still product, not a blend of pot and column. Double distilled and with a longer than usual fermentation period (5 days plus two more of “resting”).

Whatever the case, unaged white pot still rums are getting quite a bit of attention these days, moving the rum world away from dependable silver mixing agents whose name everyone knows, to something a bit more…well, adventurous. Clairins and agricoles have always been around and are leading the charge, but cachacas are making some waves too, and if more makers like Nine Leaves, St. Nicks and Rum Nation and others are spending time and money on making them, the next few years will be quite interesting on that front.

This particular rum tried very hard to walk the line between too much and too little, and succeeded pretty well: not for St. Nicks’s was the dumbing down of their product to appeal to a mass market by making a rum that wouldn’t offend anyone; and yet dialling up the volts to something that would be polarizing was not for them either.  They issued it in a smart looking bottle, at a tolerable 40%, and it was soothing enough to appeal without entirely disguising the potential and tamed wildness of its antecedents.

A rum like the White can only really be appreciated by trying it in tandem with rums like it up and down the scale.  For example, take the aromas: wax, olives, paraffin wax, floor polish and brine leaped out of the glass, and I know how unappetizing that sounds (I was fortunate in that I’ve tried more potent popskull and so I kinda knew what to expect).  But if you compare it with the DDL  Superior High Wine,  Rum Nation Pot Still 57%, or the Clairin Sajous, (or the Vaval, or the Casimir) which all packed more punch, you could make a reasoned argument that 40% really works for a larger drinking audience with rums like this. The character of the rum might be dampened a bit, yet it’s still there, singing as chirpily as a cageful of canaries. And be comforted…after some minutes the nose does even out a bit, bringing forward more floral notes, the light sugariness of candyfloss, papaya and sugar water…even a flirt of light honey.  However, it should be noted that there were few signs of any of that vegetal, grassy smell which is so prevalent in agricoles.

The taste was also quite intrguing.  I was expecting that oily, paraffin bedrock to continue, and indeed, this was there, just not that dominant.  The profile, which began with some heat, was reasonably smooth, sweet, light and clear, presenting anise, flowers and ripe cherries that kept what most would call unpleasant off-notes in the background, where they contributed a note or two — the floor polish was noticeable, for example — without overwhelming the taste outright.  With water additional cinnamon, whipped cream and crushed walnuts could be discerned, and the finish, while short, was very crisp and clear, without any driness at all.  Considering that I walked up to the St. Nick’s not expecting much of anything, it was a very pleasant surprised to be pampered by the overall worth of what I initially took to be just another throwaway white mixer.

Summing up, then, I think this is a very good all purpose white rum, and if it does not ascend to the heights of crazy as exemplified by the stronger rums noted above, you can see it had the potential to do so had they decided to beef it up some more.  It retained enough character and zest to stand by itself and possesses sufficient off notes to enhance whatever cocktail you’re thinking of dunking it into.  In that sense, it’s a great “bridge” rum —  it can be for both drinking neat or mixing, and would neither alienate those who despised the more elemental pot still whites, nor piss off the guys who prefer something that gives more bassa-bassa.  When you think about it, for any clear rum to pull off that trick is quite a feat, and that’s part of why the St. Nick’s product (and many agricole white rums) succeeds, when the white McCoy three year old, or other industrial white mixing fodder like Bacardi Superior so sadly don’t.  And it also succeeds, for my money, because it had the guts to actually go somewhere new.