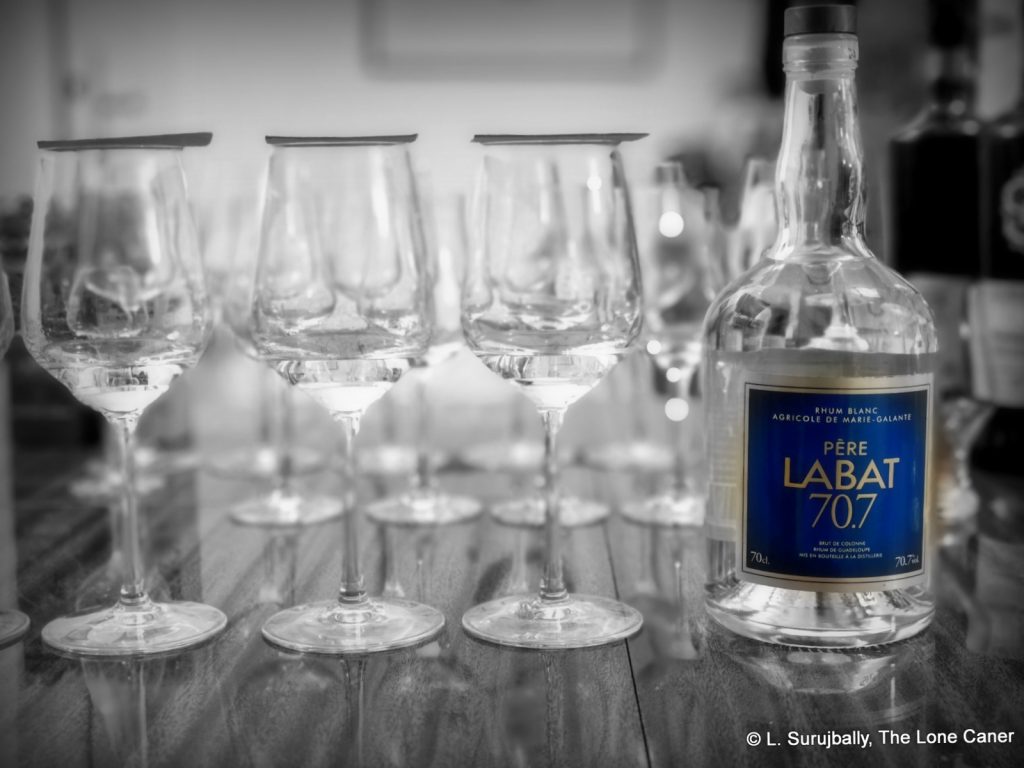 The official and very long name of this rum is “Pere Labat ‘70.7’ Brut de Colonne Rhum Blanc Agricole de Marie Galante” and clearly wants to have a title that is as long as the ABV is high. That proof point, of course, is impressive by itself, since until quite recently, white agricole rhums tended to park themselves contentedly in the 50-55% space and made their reputations by beefing up Ti Punches that knocked defenseless cruise line tourists across the room.

However, it was never going to stay that way. Even before my list of the strongest rums in the world came out in 2019, it seems like there was a quiet sort of race to the top that’s been steadily building a head of steam over the last quarter century or so. Initially there were just the famed 151s dating back to the 1800s, then a few badass island champions came out with rums like the Sunset Very Strong (84.5%) from St. Vincent, Denros Strong (80%) from St. Lucia, the Grenadian outfit Rivers’ 90% beefcake (only sold locally) — and of course the Surinamese Marienburg 90 held the crown for a long time until it was dethroned in early 2022 by one of the indie bottlers who have slowly but surely begun to colonize the gasp-inducing low-oxygen high-altitude drinkosphere. 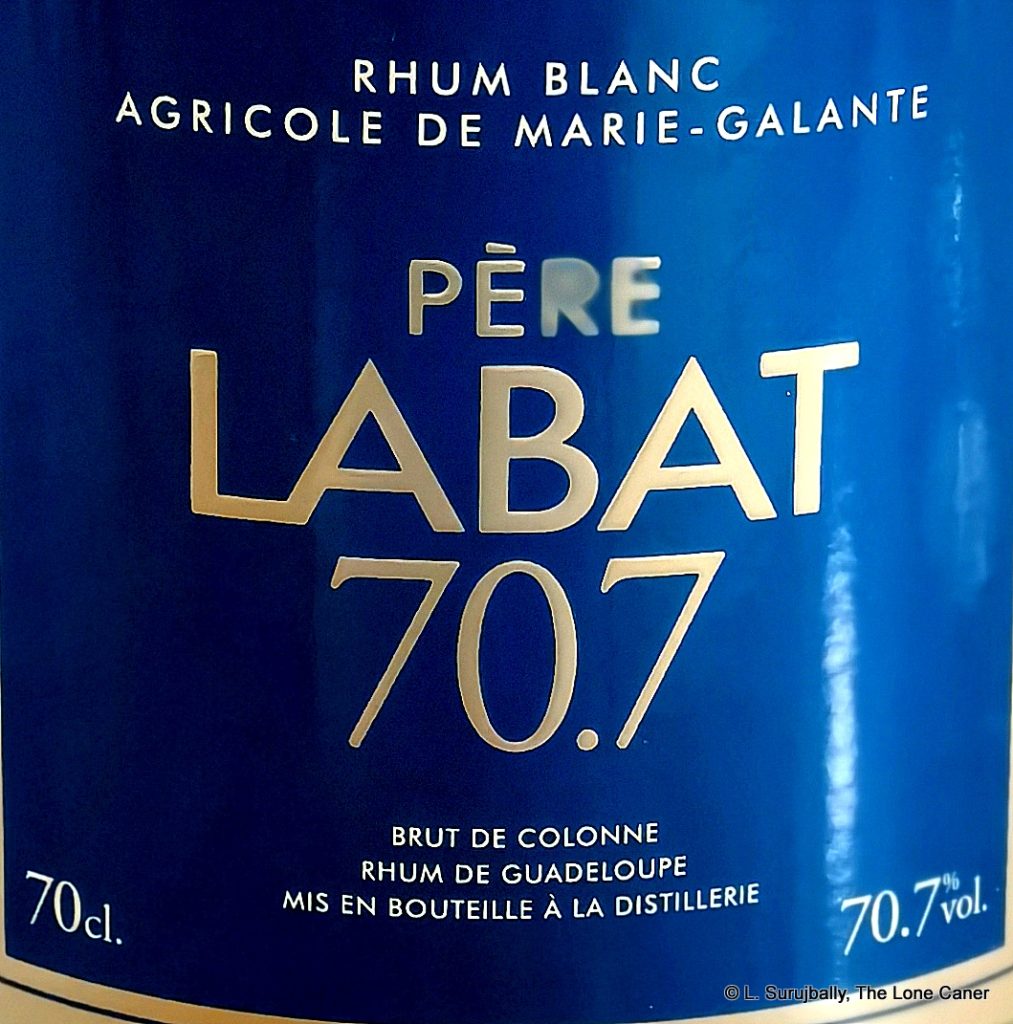 Somehow, though, agricoles and French island rums never really bothered. Oh there were always a few: we saw rums like the 62% ABV Longueteau “Genesis”, Dillon had a 71.3% brut de colonne…but these were rarities, and sniffed at by most. What’s the point? was a not uncommon question. But gradually over the last few years, agricoles picked up the pace as well: Saint James released their Brut de Colonne blanc “BIO” at 74.2%, Longueteau upped the Genesis to 73.51%, Barikken, a French indie, said to hell with it and came up with one from Montebello at 81.6%…and somewhere around 2019 or so, Pere Labat, the small distillery at Poisson on Marie Galante, introduced us to their own overproof white, the “70.7” as it crept up the ladder of their progressively stronger expressions (40º, 50º and 59º).

No medals for guessing what the strength is: the number on the label. The rhum is an agricole, from cane juice; after a three day fermentation period using baker’s yeast it’s run through their single-column still (of which they have two), rested for an unspecified number of months in inert vats, and then bottled as is without dilution or reduction. That’s what brut de colonne means: straight from the still without any further processing or mucking about, and what that provides is a profile that’s about as close as you’re going to get to what terroire is all about – assuming you can handle what it delivers.

The rhum starts with a nose that is not actually all that unpleasantly sharp, just one that is firmly, deeply, strongly intense. It’s like an über-agricole: everything you like about cane juice rhums is here, dialled up a notch or four. The aromas are herbal, grassy, fruity, and if you can make smells equal colours in your mind, then it’s a vibrant thrumming green. Cucumbers, dill, green apples, soursop, peas, grapes, that kind of thing. And more: after it opens up for a few minutes, you can get hints of strawberries, pine sol (!!), pineapples and – somewhat to my surprise – clothes fresh out of the dryer, hinting at fresh laundry detergent and fabric softener. 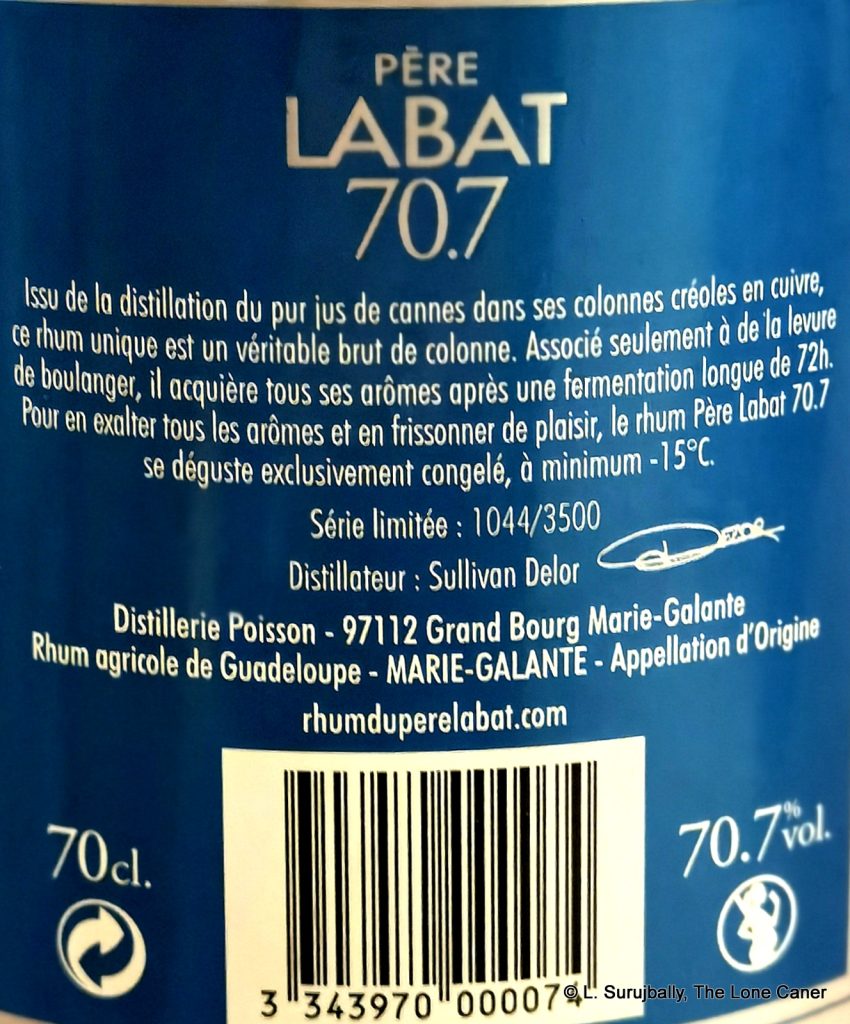 Tasting it requires some patience, because at the inception you’re getting old cardboard notes, some brine and olives, wet sawdust, and that may not be what you signed up for. Be of good cheer, the good stuff is coming, and when it does, it arrives with authority – it tastes like watermelon with an alcohol jolt and a sprig of mint, a touch salty, but mostly sweet. It tastes of pears, green grapes, apples, sugar cane stalks bleeding their sap, passion fruit, pomegranates, red currants and for a kick, adds cucumber slices in a sort of pepper infused white vinegar. And underneath it all there’s that pungently tart thin sweetness of cane juice, yoghurt, lemongrass and ginger, moving smoothly to a long, fragrant finish of sweetened lemon juice, iced tea and a nice sweet and sour note that’s just this side of yummy.

The 70.7 works on just about every level it choses. Want power? Want intensity of flavour? With that high ABV, it delivers. Want the subtlety of complex notes working well together? Yep, it has that too, with or without some water to tame it. You like an agricole profile but want one that brings something new to the party? This is one that will do you good, though of course it’s not to be taken lightly – all the above aside, when you’re sipping juice close to ¾ pure ethanol, then some caution is in order.

In short, what you get here is a seriously flavourful rum that starts with a bang, goes like a bat out of hell and stops just shy of overwhelming. Labat’s strongest white agricole is a well oiled, smoothly efficient flavour delivery system, as devoid of fat as Top Gun’s football players, and with little of it wasted, all of it for a purpose: to get as much taste into you before you start drooling and get poured into your bed by a highly annoyed significant other, even as you sport a sh*t eating grin on your face. Trust me. I know.