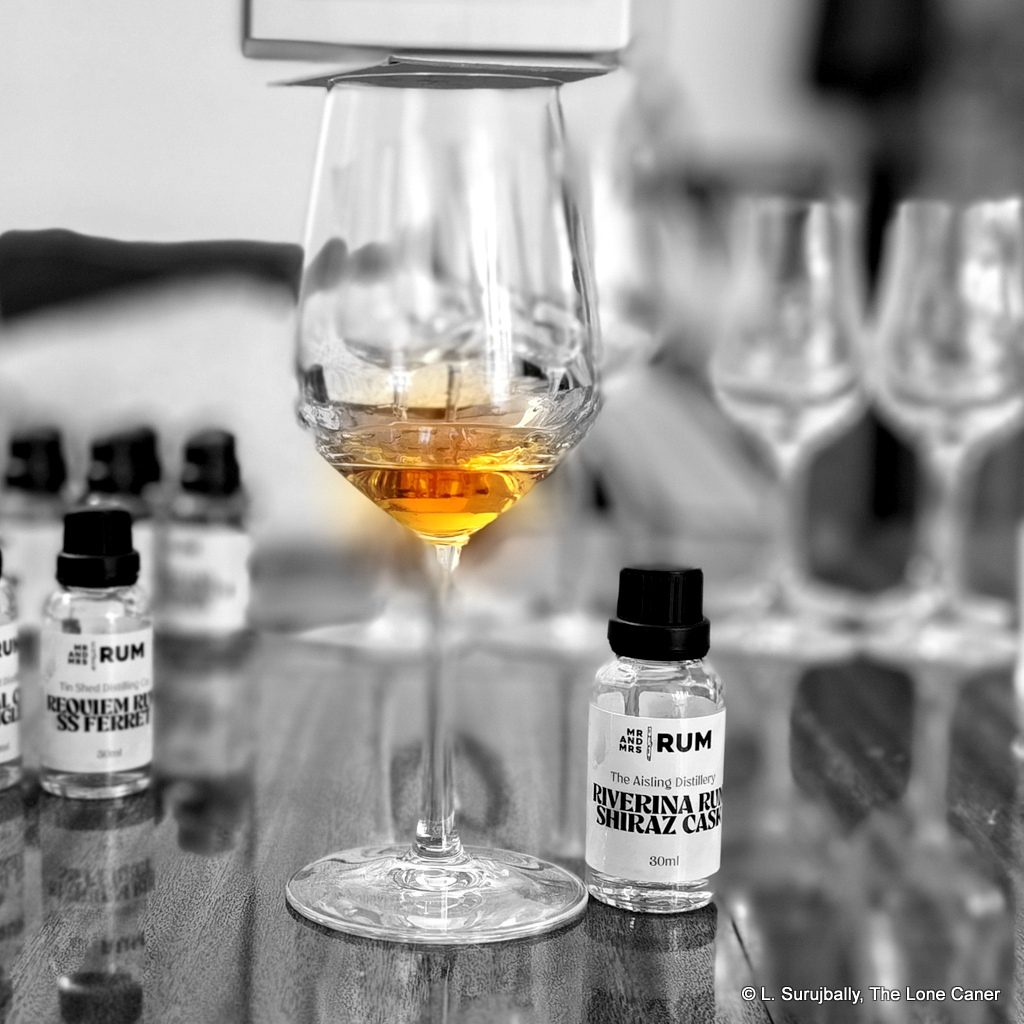 Aisling Distillery’s “Riverina” rum is one that defies easy description. It is a rum of real originality that can inspire equal parts admiration or despite, and the only one the resolutely whisky- and gin-focused distillery has ever released in its short eight years of existence. Its bare statistics could be described in a short sentence, yet to attempt an analysis of what makes it impressive may actually be too long for a short review like this one…because what it tries is no less than to marry a straightforward rum profile with something wholly and solely its own – a character, a sense of the terroire of the region from which it hails.

Consider the nose of this 47.5% pot still rum. Now, the molasses was local, the fermentation ran to three weeks with a commercial yeast and it was aged for four years in un-charred ex-shiraz casks sourced from around the NSW region of Riverina, where several wineries exist. Yet from those seemingly commonplace elements came an initial aroma that startles and beguiles in equal measure: a sweet sort of semi-rotten funkiness that channels a heap of castoff fruit outside a busy fruit-and-veggie stand in hot weather: pineapples, strawberries, bananas going off, overripe mangoes and dark cherries, plus a scent of sweat and onions and rotting sweet potatoes.  It reminds me of an overproof St. Lucian mixed up with flashes of a Longpond TECC, both lighter and more floral (faint lilies and jacaranda) than either Winding Road’s Coastal Cane or Tin Shed’s Requiem.

Then there’s the way it tastes.  At a middling sort of strength, it goes warm and relatively easy on the palate, without any undue aggro: it’s actually quite pleasant. The flavours too, are deceptively simple (and not at all like those nose might suggest they would be): initial notes of smoke and well polished leather, and then a parade of bubble gum, fruits (yellow mangoes, strawberries, gooseberries, cherries, and some lighter and crisper green grapes), which then give way to some citrus juice and iced tea. There’s also some Danish butter cookies, brine, sweet maple syrup and caramel, a touch of cinnamon and brown sugar, but none of it is cloying – sweet this is not, and in fact it presents as rather dry, overall. This all segues into a pleasantly long and dry finish, quite aromatic, citrus-y, wine-y, with the briny and slightly “off” notes combing well with sweeter and more musky ones.

This is a rum to admire, and I enjoyed it a lot.  It has a heft and a light snap to it (plus all those weird and wonderful aromas and tastes), and feels like the sort of rum you can take any way you want – neat or mixed. It hews to some of the West Indies baseline with which we are familiar, but part of it is resolutely itself, enticing you with tastes you like and holding you in place while showing off something new. Not many new rum makers can pull off that trick on their first try.

Granted it could be aged a bit longer (four years is just a starting point, really) and become something even more complex and sanded down: that aside, the reason I suggest you get it (or at least try it) is not just because of that profile, not just because of the medal score it garnered in 2021, but the simple fact that it is on a level with other good local rums that seek to redefine what Australian rum actually is. In my sojourns around the antipodean rum scene I have yet to find a rum range so consistently unique that one single smell would alow me to bugle “Oz!” immediately…but this is one like Killik, Tin Shed, Winding Road and others, that’s wasting no time getting there. It makes me look forward to whatever they will come up with next. 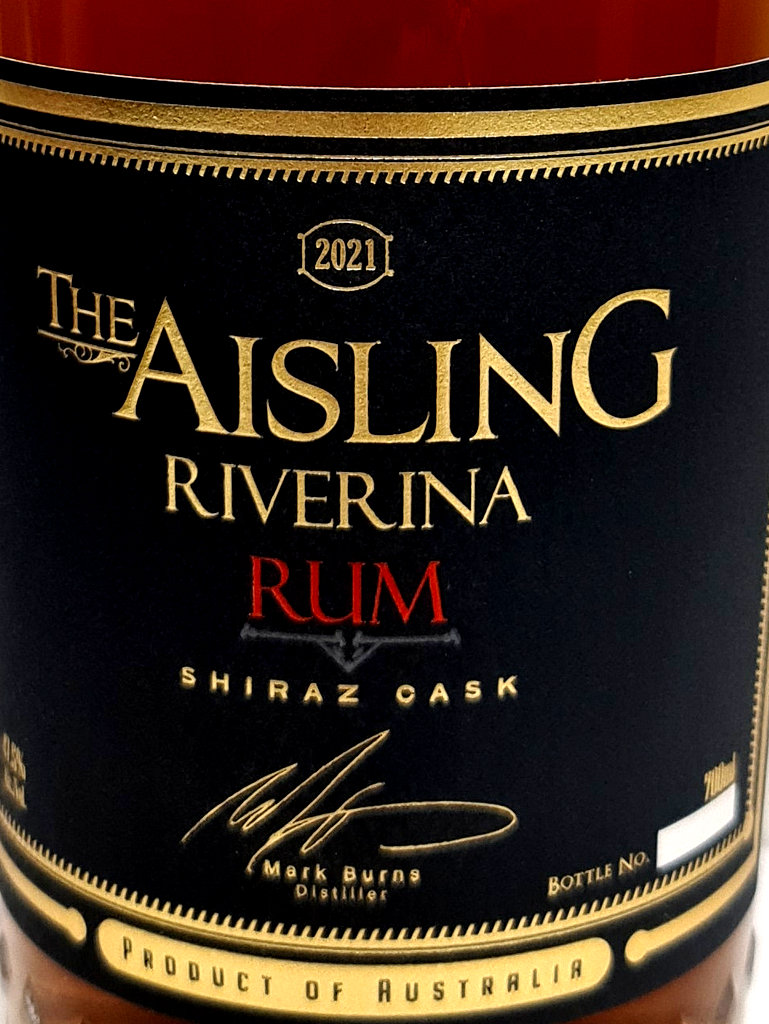 Situated in the town of Griffith, Aisling Distillery is in south central New South Wales in Australia, in a region called Riverina, which is locally known as the food bowl of Australia because of the predominantly agricultural economy. This in turn is based on the Murrumbidgee Irrigation Area (MIA) which was established in the early part of the 1900s, resulting in the land being opened up for extensive farming: fuit, vegetables, rice and vineyards were all established here, the latter often by a very large influx of Italian immigrants who remain a significant proportion of the population.

I mention all of this because the Aisling Distillery, which was founded in 2014 by the husband and wife team of Mark and Michelle Burns, was an attempt to capture and claim something of Mark’s Scottish heritage and Michelle’s Dutch background, which had to some extent been subsumed and forgotten in a largely Italian cultural milieu (about 60% of the population claim Italian background)1. A distillery was chosen, which capitalized on Mark’s engineering background and for the potential versatility, because the idea was to  make small batch premium single malts with local barley (for Mark, channeling the Scots) and high quality gin (trading on on Michelle’s Dutch descent). After some research and investment they bought an Australian made 1000 liter pot still (not sure of it has a name) sourced local barely and were off to the races.

As with other such smaller distilleries we have been looking at of late, rum was not the priority. The two year ageing requirement was an issue, some experience and experimentation was needed for rum distillation and in any case, from the beginning, good whiskies and gins were the primary goals. Looking at the amount of whiskies and various gins that have been released and listed for sale over the years — versus a single rum and one vodka — clearly the trend has continued.

That’s what makes it so interesting, to see what they did with the only rum they have produced to date, which was laid to rest in 2016, a mere two years after they started distilling.  What came out the other end in 2021 was considered so good that it won the gold medal and the “best rum” trophy at the Tasting Australia Spirit Awards that same year and basically crowned it as Australia’s best rum. That’s quite an achievement for a company which doesn’t even have a primary focus on the product.