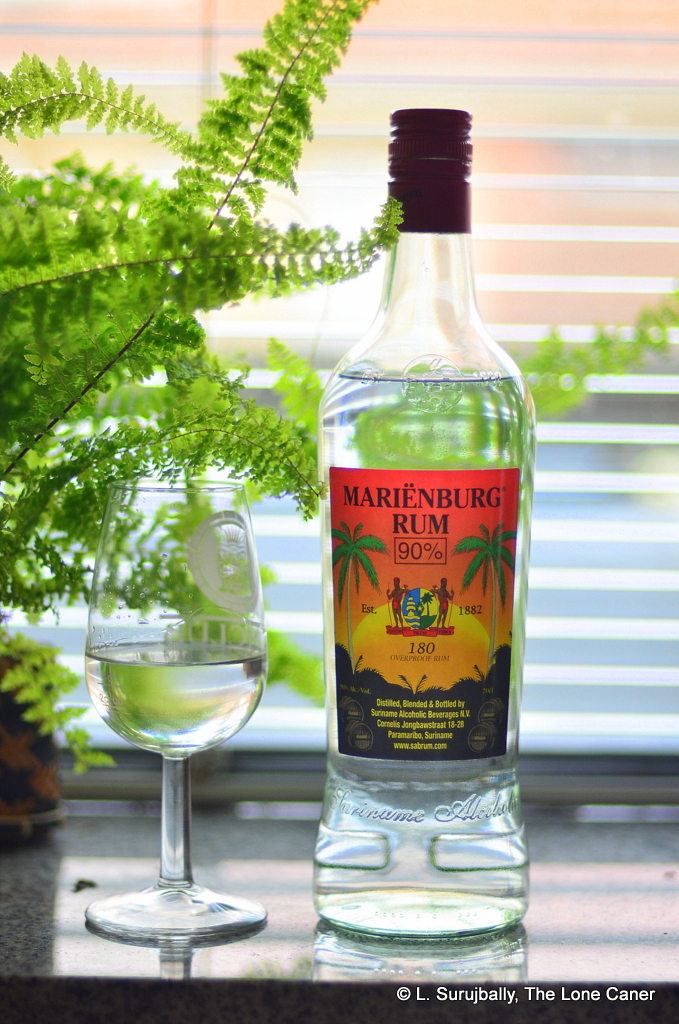 Regular readers of the meanderings of the ‘Caner in the rumiverse know something of the near obsessive (some say masochistic) search for the most powerful rums in the world that peppers these pages.  Back in the day, the 151s had my awe.  Then I tried the SMWS Longpond 9 year old 81.3% and thought appreciatively, “Dat ting wuz a proppah stink bukta.”  Lo and behold I spotted the Sunset Very Strong a year or three later, bought that, and was blown into next week by the 84.5%.  Every time I think I’ve gotten to the top of the ABV food chain, along comes another to upend my knowledge (if not my expectations).  So permit me to introduce the Marienburg 90% white rum, which crows about being (so far) the most powerful commercially available rum in the world, and who knows, maybe they are (unless Rivers Royale in Grenada wants to make a grab for the brass ring).

Who makes this alpha male of rums?  A titan of the industry with deeper pockets and more stills than common sense?  A small up-and-coming indie pushing a leaky creole still to the screaming limit?  The guy next door claiming to use his grandmother’s bathtub?  Actually, it’s made by none of these (though you can’t help but wonder what the three listed candidates might have done, right?) – a  DDL-like outfit in what was formerly Dutch Guiana has the honour of being first on the podium now. 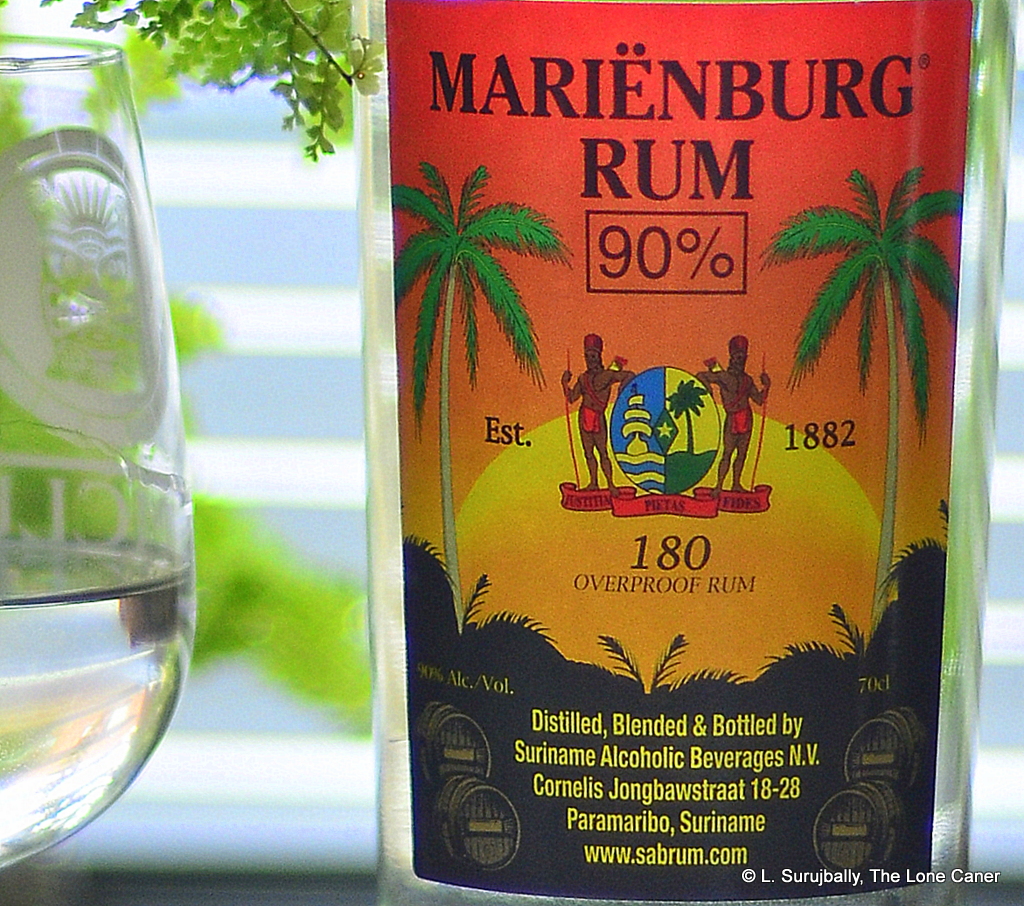 The Marienburg 90% rum is issued by a company in Suriname called Suriname Alcoholic Beverages (SAB), formed in 1966 by several local distributors who pooled resources to consolidate the making and marketing of alcoholic beverages in the country.  However, the genesis of the underlying company is far older: the Marienburg sugar factory was established in 1882 by the Netherlands Trading Society, which bought the assets of the abandoned Marienburg plantation, itself founded way back in 1745 by Maria de la Jaille.  Bad luck seems to have dogged the enterprise, as it underwent several changes in ownership, even becoming a coffee plantation for a time before the Society bought it.  The Society felt it could buy sugar cane from all the surrounding smaller plantations and built a processing factory and 12 km of railway line, opening for business in 1882 and gradually buying up more and more of the smallholdings that once supplied it.

Poor business judgement, political issues and falling sugar prices led to the Marienburg factory being closed in 1986 and it’s now a tourist attraction of rusting machinery and overgrown train tracks.  Nowadays SAB does all of its processing in Paramaribo, where it’s offices also are located. Like DDL and other national companies, they produce a range of spirits for domestic consumption, as well as the Borgoes line of rums which can be found in Europe (they used to produce Black Cat and Malbrok rums the latter of which is no longer being made).  Their rums are Trinidad-molasses based, distilled on a column still, with the resultant spirit put to age in american oak barrels: note that they also have a pot still, but I’m unable to establish which rums are made with it.

That’s all there is to tell you. Let me save you the trouble of the rest of the review and simply state that the rum is falls rather flat.  Potent yes, strong yes, masochistic overkill, absolutely…but alas, it serves no useful purpose and contained none of the delicately fierce redeeming features of either the SMWS Longpond or the Sunset Very Strong, which at least coaxed some fascinating tastes out of their barrels to provide a surprising level of heft and interest that backed up the juggernaut of their power.  Still, if you want to make a killer cocktail, for sure this one is your candidate, so there’s that, I suppose.

This the way I felt when smelling the Marienburg, which presented its initial nose with all the grace and finesse of  a somnolent pachyderm. It’s got bulk, it’s got heft, and absolutely nothing happens with it after I passed through the initial scents of  glue, acetone and sugar water, with maybe olive oil, faint petrol, some light flowers barely peeking around the curtain of the stage…and that’s it. One could sense the power behind all that, yet frustratingly, most of it was kept under wraps.  I should also mention this: there was surprisingly little sting or real heat on the nose, none of the potency one is led to expect from something brewed to this level of badass.

Still, say what you will about the smell (or lack thereof), on the palate the rum was rough enough to make a zombie fear the apocalypse.  Even a small shot, the tiniest sip was a searing oily mass of heat and power on which you could possibly grill a good steak, causing lips to blister, and the tongue to shrivel up, and if you coughed, a thousand flies would die on the spot. On that level, all was as expected…but heat and savagery aside, it was something of a let down – again, there was so very little there.  No real complexity, no real taste such as makes a 60% CdI or Velier rum so amazing, just scraping clear sandpaper and moonshine. Rubber, more acetone, sugar and salt water.  No sweet undercurrent of anything: paint thinner, interspersed with (get this!) the faintest hint of bubble gum.  Cherry flavoured gum at that.

Given that the power was there but not the taste, I was forced to conclude that this rum didn’t get issued and it didn’t get released…it escaped before it was properly ready, and even the finish, long and heated as it was, offered little additional anything to make it perhaps worth a third or fourth look. It was like the elephant never really woke up and stabbed around with the tusks, y’know?  I have a feeling that it was aged a few months and then filtered but there is no evidence for that aside from my own tasting.

So, my recommendation is simply to save it for any mixed drink or cocktail that you feel like making to show off your bartending skills (logically, since no sane person would ever drink it neat), and to embarrass your less-endowed rum friends who bugle loudly about how they can hold their hooch.  They may say that in front  of their girls all they want, but serve them this and it’ll put them down for the count faster than Mike Tyson on a bad hair day.  And maybe that’s all such a rum can be used for, in spite of the high hopes I had for something a little more interesting, that would put its weaker overproof cousins to shame.  But I guess the independent bottlers still have bragging rights for those.