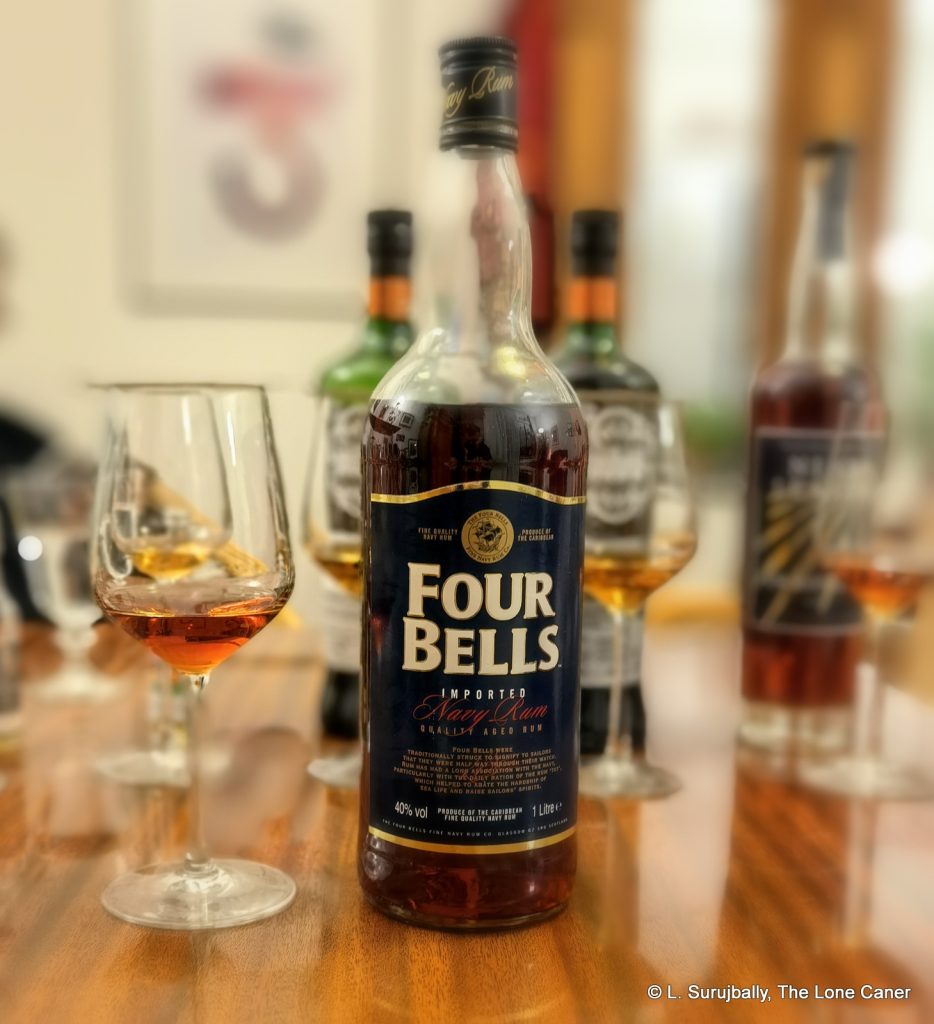 Disregard – actually, try to forget – the label for a moment, so that the word “Navy” doesn’t send you into conniption fits. It’s an advertising thing, and exists on that label for no other reason than to draw a line between the seafaring traditions of yore, and your mind — as if somehow, by buying and drinking the rum, you are instantly transported to a noble nautical heritage stretching back centuries, with sea spray in your face, snapping sails overhead, and you line up at four bells to get your tot. I guess that’s the rum part – sodomy and the lash go mercifully unexamined (though one does wonder when some courageous Navy-rum-maker wannabe will eventually go the whole tot on the label, so to speak…but I digress).

The rum is of course not a true Navy rum. That’s just marketing garbage; it’s a standard strength blend of unspecified Caribbean components which one website generously referred to originating from “the best sugar cane” and “from the Caribbean islands of Guyana” – the very thing that always soothes my suspicions about a brand and gives me the warm and fuzzies.  It’s apparently made by a company called “The Four Bells Fine Navy Rum Co.” out of Glasgow which is almost untraceable. Consider it a contract-made third-party blend, no longer made, probably hailing from the island of Guyana. You can trust that. The label says so. 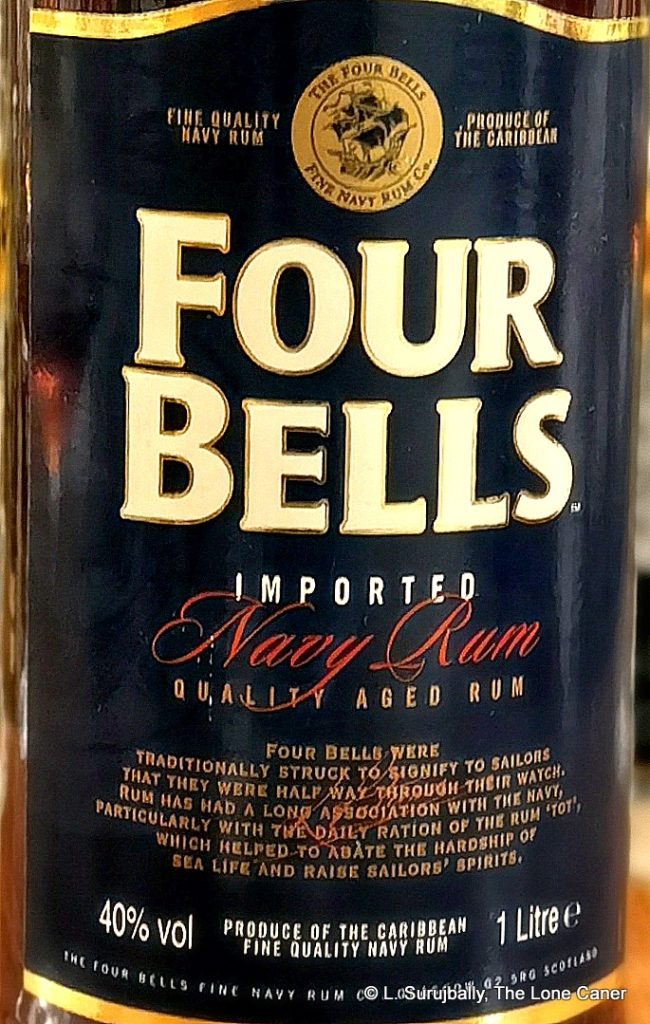 Nose – All the snark out of the way, I must confess it wasn’t half bad. It’s a dark brown rum, actually quite aromatic. There was molasses, wood, tannins, licorice and brine with a heavy, almost sulky attitude to the nose. Wet sawdust, caramel and honey, well-polished leather boots and some emergent lumber notes that kept getting stronger. Nothing new, nothing too complicated, lots of old faithfuls – this is almost like low-level spirituous comfort food.

Palate – Again, good: warm and simple, Molasses, polished leather, dark cherries, raisins, licorice, a smidgen of sharper tannins and some sour citrus rind. By now I kind of had a bead on the thing, so was not surprised to taste additional notes of bitter chocolate, coffee grounds, toffee and molasses, clearly young, somewhat sharp. It reminded me of cheap Canadian mixers like Young’s Old Sam (a perennial favourite of mine).

Finish – Short, which is to be expected at 40%, a bit sweet and yet also dry, with closing points of pungent licorice, molasses and a very sweet caramel macchiato.

Thoughts – Bells is a rum that doesn’t need to be stronger, because for all its evident youth, it’s also heavy enough and has sufficient flavours to be tried neat. It is, in that respect, completely straightforward, and clearly not looking to break boundaries and redefine genres. It’s fine as it is, within its limits, but those limits are further restricted by the lack of information provided about the rum itself, and the company that makes it. Like it or not, few taste blind, and people do tend to rate a rum based on what they know about it…or not. Here we know nothing about the rum, the blend, or the maker – and if we can’t trust the information that is provided, if only on the label, then it makes us trust what we’re tasting less, much less, and there aren’t many who would buy a rum with that kind of cloud hanging over it. 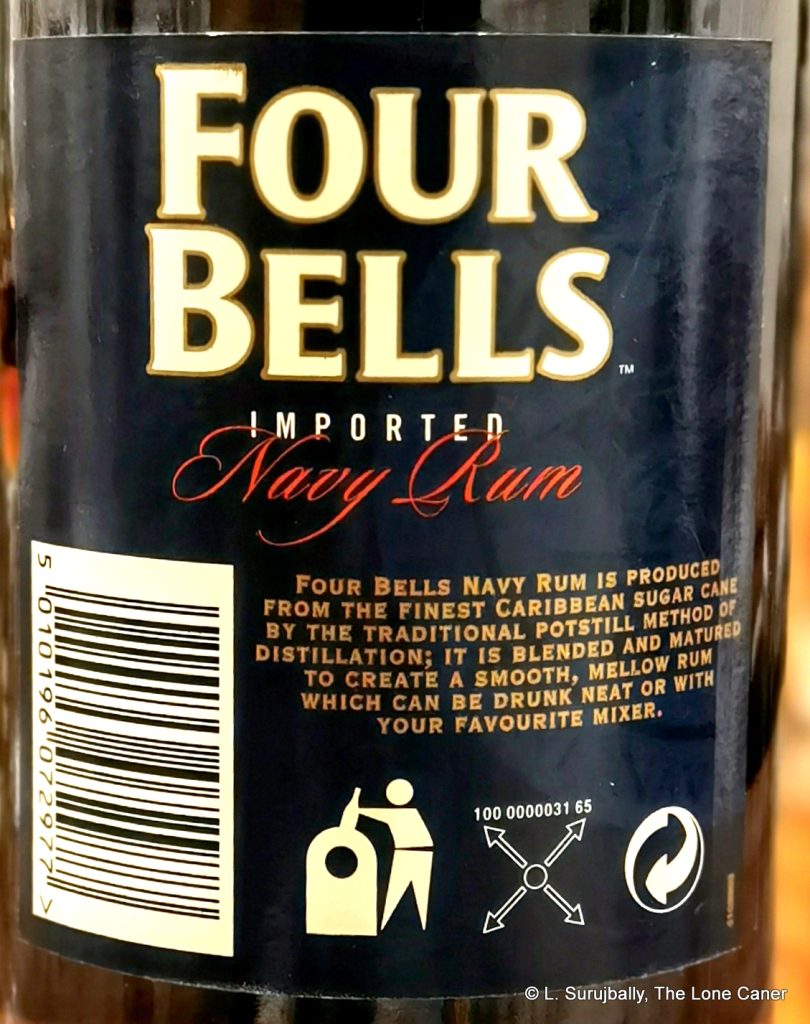