Hampden gets so many kudos these days from its relationship with Velier — the slick marketing, the yellow boxes, the Endemic Bird series, the great tastes, the sheer range of them all — that to some extent it seems like Worthy Park is the poor red haired stepchild of the glint in the milkman’s eye, running behind dem Big Boy picking up footprints. Yet Worthy Park is no stranger to really good rums of its own, also pot still made, and clearly distinguishable to one who loves the New Jamaicans. They are not just any Jamaicans…they’re Worthy Park, dammit. They have no special relationship with anyone, and don’t really want (or need) one.

For a long time, until around 2005, Worthy Park was either closed or distilling rum for bulk export, but in that year they restarted distilling on their double retort pot still and in 2013 Luca Gargano, the boss of Velier, came on a tour of Jamaica and took note. By 2016 when he released the first series of the Habitation Velier line (using 2015 distillates) he was able to convince WP to provide him with three rums, and in 2017 he got three more. This one was a special edition of sorts from that second set, using an extended fermentation period – three months! – to develop a higher ester count than usual (597.3 g/hLpa, the label boasts). It was issued as an unaged 57% white, and let me tell you, it takes its place proudly among the pantheon of such rums with no apology whatsoever.

I make that statement with no expectation of a refutation. The rum doesn’t just leap out of the bottle to amaze and astonish, it detonates, as if the Good Lord hisself just gave vent to a biblical flatus. You inhale rotting fruit, rubber tyres and banana skins, a pile of warm sweet garbage left to decompose in the topical sun after being half burnt and then extinguished by a short rain. It mixes up the smell of sweet dark overripe cherries with the peculiar aroma of the ink in a fountain pen. It’s musty, it’s mucky, it’s thick with sweet Indian spices, possesses a clear burn that shouldn’t be pleasant but is, and it may still, after all this time, be one of the most original rums you’ve tried this side of next week. When you catch your breath after a long sniff, that’s the sort of feeling you’re left with.

Oh and it’s clear that WP and their master blender aren’t satisfied with just having a certifiable aroma that would make a DOK (and the Caner) weep, but are intent on amping up the juice to “12”. The rum is hot-snot and steel-solid, with the salty and oily notes of a pot still hooch going full blast. There’s the taste of wax, turpentine, salt, gherkins, sweet thick soya sauce, and if this doesn’t stretch your imagination too far, petrol and burnt rubber mixed with the sugar water. Enough? “No, mon,” you can hear them say as they tweak it some more, “Dis ting still too small.” And it is, because when you wait, you also get brine, sweet red olives, paprika, pineapple, ripe mangoes, soursop, all sweetness and salt and fruits, leading to a near explosive conclusion that leaves the taste buds gasping. Bags of fruit and salt and spices are left on the nose, the tongue, the memory and with its strength and clear, glittering power, it would be no exaggeration to remark that this is a rum which dark alleyways are afraid to have walk down it. 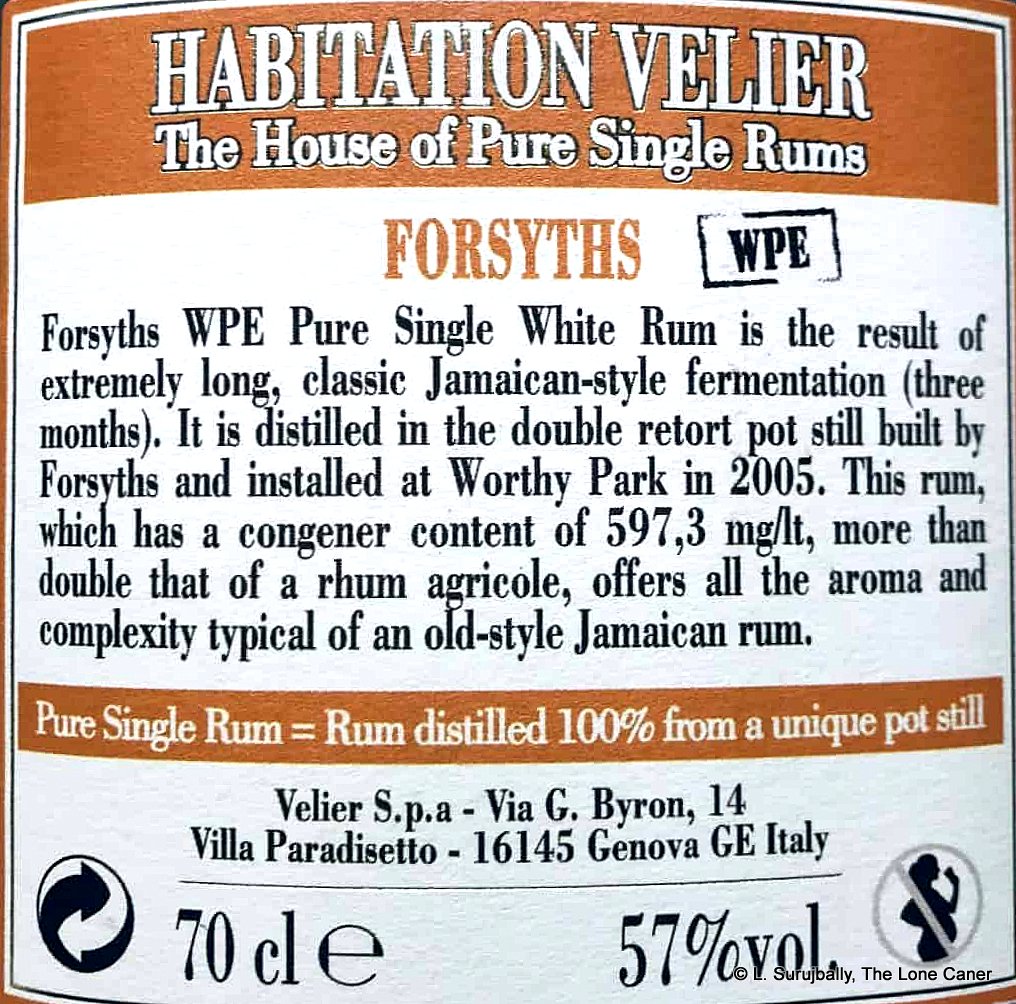 The rum displays all the attributes that made the estate’s name after 2016 when they started supplying their rums to others and began bottling their own. It’s a rum that’s astonishingly stuffed with tastes from all over the map, not always in harmony but in a sort of cheerful screaming chaos that shouldn’t work…except that it does. More sensory impressions are expended here than in any rum of recent memory (and I remember the TECA) and all this in an unaged rum. It’s simply amazing.

If you want to know why I’m so enthusiastic, well, it’s because I think it really is that good. But also, in a time of timid mediocrity where too many rum makers (like those Panamanians I was riffing about last week) are afraid to take a chance, I like ambitious rum makers who go for broke, who litter rum blogs, rumfest floors and traumatized palates with the detritus of their failures, who leave their outlines in the walls they run into (and through) at top speed. I like their ambition, their guts, their utter lack of fear, the complete surrender to curiosity and the willingness to go down any damned experimentative rabbit hole they please. I don’t score this in the nineties, but God, I do admire it – give me a rum that bites off more than it can chew, any time, over milquetoast low-strength yawn-through that won’t even try gumming it.