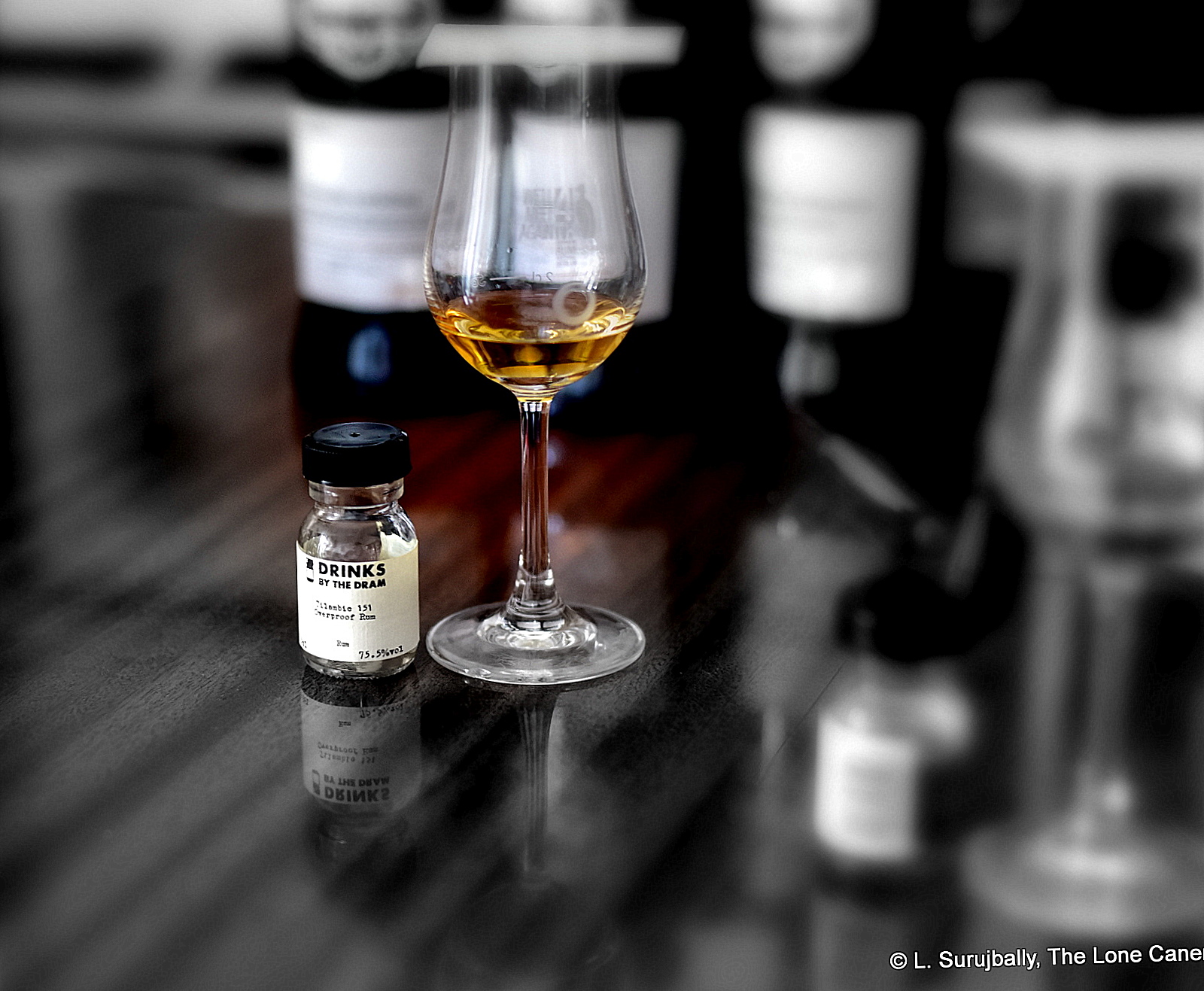 Ten years ago, the 151s were regarded with the sort of wry caution with which one approaches a crazy old uncle who may lash out with either invective or drool at any moment, depending on the circumstances. They encouraged adverbial density, were the strongest rums available to the rumworld, and used exclusively as cocktail bases and mixing agents. Myself, I was always a little amused by their ferocity and used their elephantine profiles as an excuse to write reviews that didn’t take themselves too seriously (like the Bacardi, Lemon Hart, Cavalier, or Appleton 151 reviews, for example). But what else to do? I mean, back then we had no access to or real knowledge of the cask strength rums that now so dominate the upper echelons of quality rums, and to consider a 151 as anything else but a throwaway effort made to bag the overproof crown and/or to concoct crazy strong cocktails would be to mis-state what they meant to us.

As the years passed, overproofs more or less fell out of the mainstream, even out of favour, replaced by exactingly made full proof rums, some of which are approaching that kind of strength, though comparatively rarely. I can’t remember the last time I saw a review of a 151 aside from Habitation Velier’s new white (not that there were that many to begin with) and mention of any is passing rare. But me, I never forgot them, and still hold fond memories of their harsh fury, and when I saw a Tilambic 151 sample for sale, well, what’s a reviewer to do?

Cracking it, you’d certainly exercise all the usual cautions, as one would with the SMWS Long Pond 5.1 (81.3%), the Sunset Very Strong (84.5%) or the Marienburg White (90%). Because like all of those, the Tilambic is frenetic, unapologetic and massively alcoholic – it smokes, it seethes, it exudes badass from every pore: you can almost hear the tinkling plink of minigun shell casings piling up around your feet as you pour. To smell, it’s sharp and extremely hot, spicy and slightly sweet, redolent of raw molasses and sweet corn in a can (weird, I know), to which some light lemon zest and caramel has been mashed in with an oaken club wielded by The Rock. And which – you might be surprised to discover – is actually not bad at all. I was certainly expecting less.

As for the palate, well, it’s a monster (yeah, big surprise). Briny with olives, pimentos, hot hot hot. A lot carries over from the nose, but there’s more too, once you adjust to the force with which it attempts to tattoo “151” on your tongue. It has, both before and after a few drops of water, some strawberries, green apples, sawdust, light pencil shavings, licorice, mustard, vanilla and a ton of oak ameliorated by a sly little citrus line. But it also doesn’t attempt to do too much; and unlike some indie caskers at this level, is not that complicated – in that relative simplicity lies much of its appeal, if your taste runs into high proof drinks. It all gets summed up very nicely on the finish, which is oaky, spicy, briny, dry, with a little fruit and some licorice, vanilla, caramel, and then it’s gone. Probably leaving you gasping.

So who makes this thing? We know about St. Aubin, Lazy Dodo, New Grove and Chamarel, all of which channel the old rum making traditions of the island. But the company that makes this one, Green Island, is actually a UK company which licenses International Distillers Mauritius to provide their rums – IDM also makes marks like the Flamboyant, Cascavel and the well known and positively regarded Penny Blue rums, as well as a number of Green Island starter rums. So not so much an artisanal rum maker as a local spirits conglomerate, like DDL in Guyana or Angostura in Trinidad. The Tilambic 151 is made on a column still, aged for varying times (“up to seven years”) and has no additives, flavourings, colourings or filtrations.

That puts the it squarely into the mixing category, as are most lightly aged rums of this kind. That it has more qualities than defects is to its everlasting credit, and our relief. I mean, this thing could take out two defensive linemen in full pads just by cracking the seal – but it was surprisingly light and flavourful too, especially after resting for a while to burn off the alcohol. And even if it wasn’t genetically enhanced by a team of imported Swiss scientists who had seen King Kong one too many times, I can’t dismiss it out of hand – because for all its coarse and brutish power, it really was quite an interesting rum, with some positives and very few negatives. For a 151, that’s really quite an achievement.