Although the Compagnie des Indes has a few very well received multi-island blends like the Tricorne, Boulet de Canon, Caraibes and the Domindad, my appreciation of their work is so far given more to individual islands’ or countries’ rums. There’s something about their specificity that makes the land of origin snap clearly into focus in a way a blend doesn’t (and doesn’t try to, really). That’s not a criticism by any means, just a direction in which my preferences bend, at least for now.

After having gone through a few Fijian rums recently, I finally arrived at this one, which could not beat out the hauntingly magnificent TCRL 2009 8 Year Old, but which came a very close second and was in every way a very good rum. It was also from South Pacific Distilleries (the only distillery on Fiji and a subsidiary of the Asutralian Foster’s group) with a 244-bottle outturn from one cask, ¾ continentally aged, a blend of pot and column still, bottled at a hefty, snarling 66.8% – it is of course one of those rums issued as a one-off series for Denmark in a pre-cask-strength CdI rumiverse (the cask strength editions from CdI started to appear around Europe in 2017 as far as I can tell, which disappointed a lot of Danes who enjoyed the bragging rights they’d held on to up to that point). 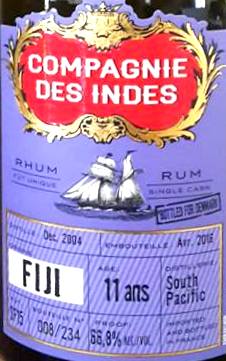 It was obvious after one tiny sniff, that not one percentage point of all that proofage was wasted and it was all hanging out there: approaching with caution was therefore recommended. I felt like I was inhaling a genetically enhanced rum worked over by a team of uber-geek scientists working in a buried government lab somewhere, who had evidently seen King Kong one too many times. I mean, okay, it wasn’t on par with the Marienburg 90 or the Sunset Very Strong, but it was hot. Very hot. And also creamy, deeper than expected, even at that strength. Not quite thin or evisceratingly sharp like oh, the Neisson L’Espirit 70°, and there was little of the expected glue, brine and dancing acetones (which makes me suspect it’s a column still rum, to be confirmed) – and man, the clear, herbal crispness of an agricole was so evident I would not have been surprised to find out that cane juice was the source (all research points to molasses, however). After my eyes stopped swimming, I jotted down further notes of citrus, peaches, tart unsweetened fresh yoghurt, and it was of interest that overall (at least on the nose), that creaminess and tartness and citrus acidity blended together quite well.

Things got interesting on the palate: again it was hot enough to take some time getting used to, and it opened with a pronounced nuttiness, sour cream, nutmeg and ginger. Over half an hour or so other flavours presented themselves: fleshy fruits, (dark cherries, peaches, apricots) and further musky spiciness of cloves, tumeric and cinnamon. Molasses, toffee, butterscotch. Plus wax, sawdust and pencil shavings, bitter chocolate and oak….wow. After all that, I was impressed: there was quite a lot of rabbit squirming around in this rum’s jock, in spite of the strength and heat. Even the finish was interesting: strikingly different from the Duncan Taylor or the Rum Cask Fijians (both of which were clearer, crisper, sharper) the CdI 11 YO showcased a sort of slow-burning languor – mostly of fleshy fruits, apples, some citrus, candied oranges – which took time to develop and ended with the same soft undertone of molasses and caramel as had characterized the palate.

Let’s sum this up as best we can. I think the sharper tannins kind of detracted (just a little) because the softer notes were not enough to balance them off and produce a pleasing combination. Even so, such a discombobulation made for an element of off-the-wall that was actually quite enjoyable because you keep going “huh?” and trying it some more to see where on earth the thing is going. So it succeeded on its own terms, and was quite individual on that level.

Overall though, it seems to me that no one rum I’ve tried from South Pacific Distillers has a lock on the country or distiller’s profile that characterizes either beyond any shadow of a doubt. In point of fact, those which I’ve tried to date are each different from the other, in ways both big and small, and that makes it difficult to point to any of them and say “Yeah, that’s a real Fijian rum” — maybe I’ll have to find a few Bounty rums for that. Still, for the moment, let me sum up this Fijian by stating that as long as you don’t mind getting a rum that wanders with furious velocity from the centre line to the verge and then into a wall, all with a near joyous abandon, a rum which has curious and slightly unbalanced tastes that somehow still work…well, this is definitely a rum to try. It’s a rum that grows on you with each sip, one that you could easily find yourself trying deceptively often, and then wondering confusedly, a few weeks or months down the road, why the hell bottle is empty already.