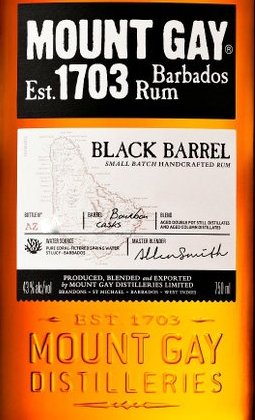 Some time ago I called Mount Gay XO one of the Key Rums of the World, and observed that it longevity, decency and general all-purpose usefulness created a shadow in which all subsequently issued Bajan rums to some extent had to live. Times moved on and other profiles started to take precedence in the rumiverse, but Mount Gay, however delinquent in moving into the limited edition or cask strength landscape so effectively colonized by Foursquare, did not entirely rest on its laurels, and did try to experiment here and there to see what else they could pull out of their trousers (their recent foray into flavoured categories like the Mauby is a case in point).

The Black Barrel, introduced in 2013 (it was previously called the Eclipse Black 100 Proof) was one of these. It was never quite a mainstream MG rum like the XO – which can be found practically everywhere and is known around the world – but it was and remains an interesting variation on the core concept of a pot and column still blend bottled a few points above the norm (43%). Its claim to distinction (or at least difference) was to have a secondary ageing in heavily charred ex-bourbon barrels, and it was specifically created, according to Master Blender Allen Smith, to provide a versatile best-of-both-worlds rum – a better than average near-premium that could just as easily be used in a cocktail, and particularly to appeal to bourbon drinkers.

For me, not entirely. For all its appearance of small batch quality (label has each bottle individually numbered and Mr. Smith’s printed signature on it), there was little to mark it out as being something exceptional – though admittedly it did diverge from the XO in its own way. It presented an initial note of light acetones and nail polish, 7-Up and a lemon meringue pie, delicately creamy with citrus, tart apples, and a lot of vanilla, under which could be sensed some ripe bananas. “Light and frothy,” my notes went, “But where’s the exceptionalism?”

Exactly, and that was also the issue with the taste. It came on somewhat sharply, and with some salt and very light olive-y profile (that was good), and as it opened up and I came back to it over time, further hints of apples, pears, salt caramel, almonds, coconut and bananas made their presence known. Molasses, somewhat surprisingly, took a back seat, as did the citrus notes, both of which could be sensed but were so light as to almost disappear into the background altogether. The vanilla, on the other hand, was right there, front and center, and it all faded out fast in a rather short finish that coughed up a few last tastes of a citrus-flavoured yogurt, some woody and smoky notes, more vanilla and a final touch of caramel.

The Mount Gay Black Barrel, then, was well made and nicely assembled – but originality was not exactly its forte. The balance tilted too heavily to the influence of the char (maybe that was the intent?), and wasn’t quite up to scratch for me. The whole experience was also not so much light as underperforming … more than a youngish rum (it’s actually a blend of rums aged 7-12 years) could have been expected to present. In that respect, the makers were absolutely right – the rum could just as easily be taken neat as mixed up with something to create a cool cocktail with an evocative name, redolent of Barbados. What it meant to me when I was sorting out my thinking, was that it was mostly another rum to round out the overall portfolio of the Mount Gay line than anything so original that it would supplant the XO in the opinion of its adherents. Perhaps it would have been better off trying to be one or the other, sipper or mixer, than uneasily straddling the divide between them both. Rums that fail at this balancing act tend to have very long shelf lives, as this one will probably have on mine.