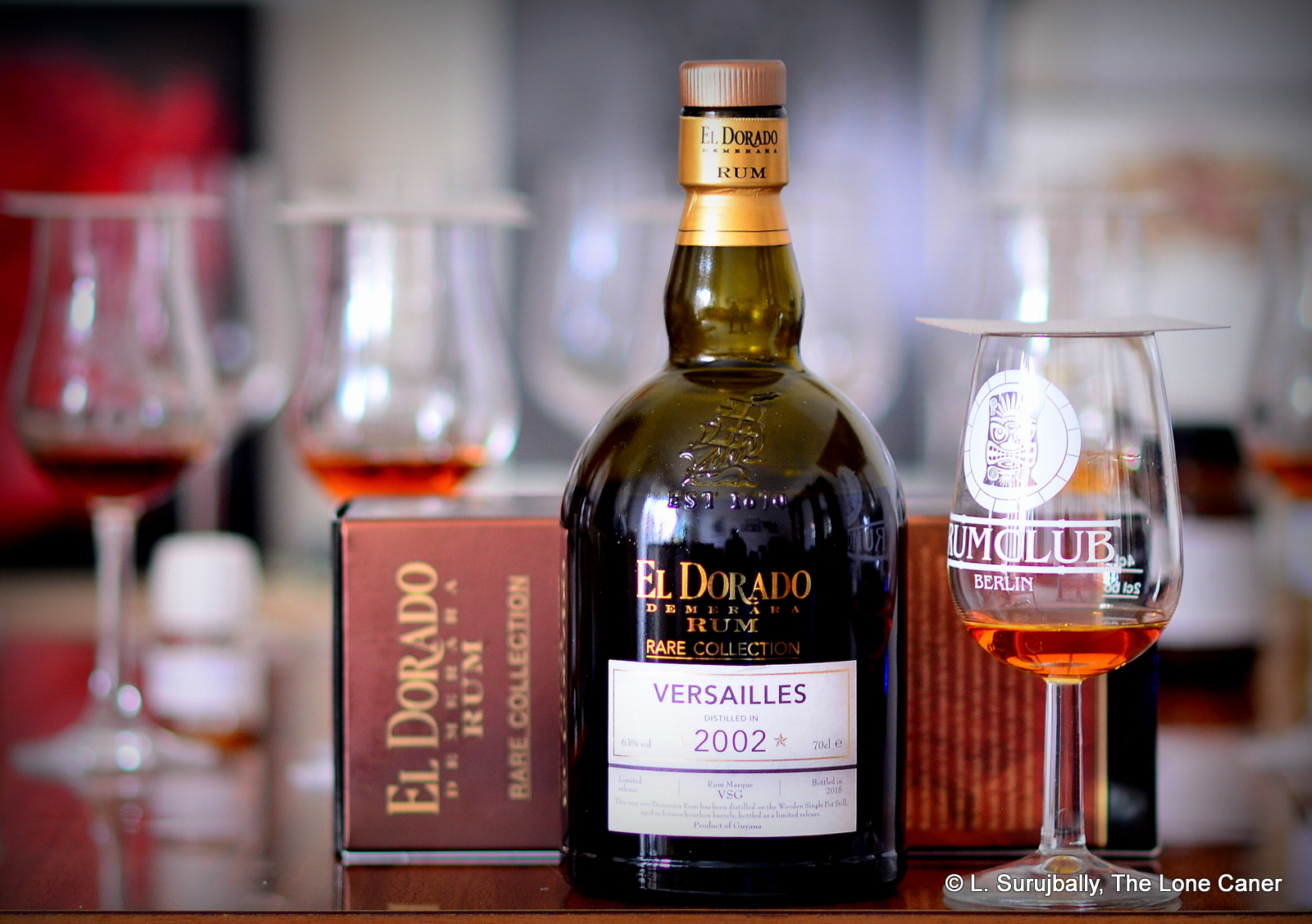 It’s been two years since the furore created by the inadvertently premature publication of the Velier catalogue entries for the El Dorado Rare Collection ignited in the minds of the Velier lovers, and I’ve been sitting on the three bottles almost since that time, waiting to get around to them. One of the reasons the reviews were not written immediately was simply that I felt the dust needed to settle down a bit, so that they could be approached with something resembling objectivity.  Two years might have been just about enough for me to forget the original reviews that came out that year…and then The Little Caner was glancing through the Big Black Notebook #2 and pointing out that here were notes I took – twice! – and still not written about, so what’s your malfunction, Pops? Move along already.

Yes well.  Leaving aside the young man’s disrespect for his geriatric sire, let’s review the stats on this rum, the Versailles, made from the near legendary wooden single pot still, marque VSG.  First of all, no information on the outturn was ever made available, so I’m forced to go with Luca’s comment to me of “about 3000 bottles,” which DDL never felt it necessary to nail down for us. Distilled 2002, bottled in 2015, so a 13 year old rum. Strength was a beefy 63% and for that you could expect some seriously intense flavour when coupled with full tropical ageing. There are some other facts which I’ll go into in more depth below the tasting notes, but let me address these first, so you get the same impressions I had without anything else clouding your mind.

A bright orange brown in hue, the nose that billowed out as soon as the bottle was cracked, was deep and lush, and I liked it right off.  Coffee and candied oranges, nougat and caramel, quite soft for a 63% beefcake, and quite rich, to which were added, over time, additional notes of furniture polish, muscavado, anise, florals and some light paint thinner.  Having had a few El Dorados quite recently, I remember thinking this actually presented quite close to the 12 Year Old “standard” rum (at 40%), which, while stupefied to the point of near imbecility in terms of both strength and adulteration, also had Versailles pot still rum as a major portion of the blend.

That wooden pot still taste profile really comes into its own on the palate (much as the 12 year old did), and this was no exception.  The whole taste was anise, pencil shavings and oak forward, and this became the bedrock upon which other, warmer and subtler flavours rested – fruits like apricots, pears, plums, raisins and ripe apples for the most part – but the tannins were perhaps a bit too dominant and shoved the caramel, molasses, herbs (like rosemary and mint) and lighter fruity elements into the background.  I added water to see what would happen and the fruits displayed better, but it also allowed a certain sweet syrup (the kind canned fruits come with) to become noticeable, not entirely to the rum’s benefit. It tasted well, was intense and powerful beyond question: I just felt the balance between the elements was weighted too heavily in favour of the woods and bitter chocolate notes…at the expense of a more tempered rum that I would appreciate more.  As for the finish, it really was too tannic for my liking, once again pushing soft fruits into the background and not allowing much except caramel, lemon zest, raisins and acetones to close off the show. 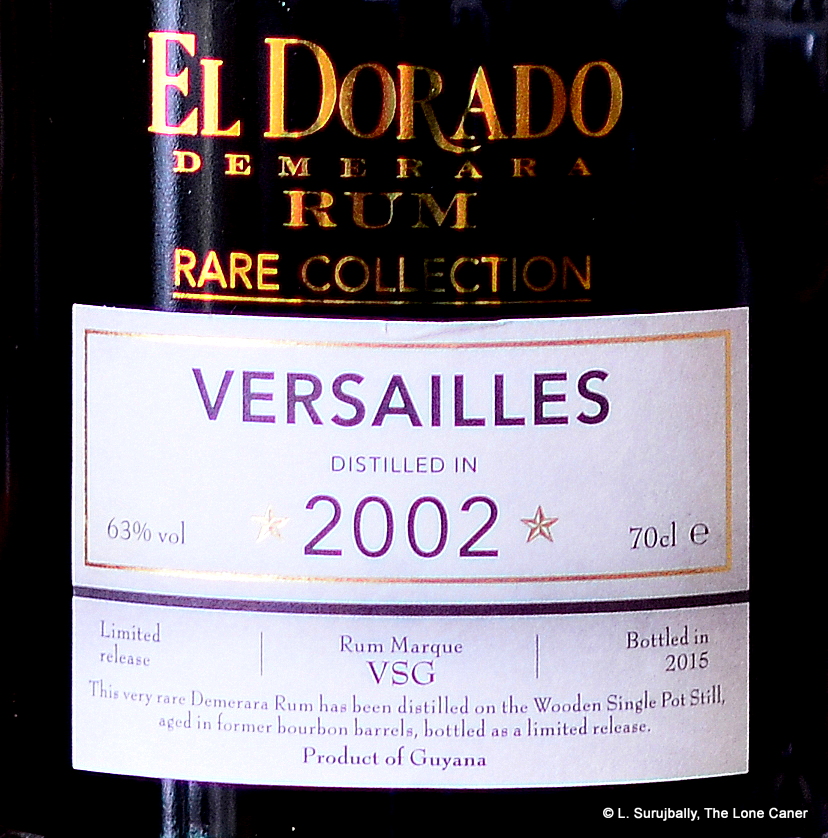 Now, according to Henrik over on the Rumcorner, who reviewed this very same rum before passing it over to me, it was tampered with – some 14g/L of adulteration was present, and the Fat Rum Pirate noted 8 g/L himself.  That’s not enough to disqualify it from the running – you have to go way over 20 g/L to start seriously degrading the taste of a rum this powerful – but the question is and will always remain, why bother? At the price point and relative rarity, for the purpose of the issue – to take over from Velier and make a mark on the full proof rarities of the world – only die-hards would buy it and they’re the ones who knew best, and know now, what they’re buying, so why piss them off (and worse yet, omit the disclosure)? Tradition? Gimme a break.  (On the other hand, it is possible DDL merely mismeasured the true ABV and it’s actually not 63% and thereby fooled the hydrometers and calculations…but I chose to doubt that).

That said, this is one of those times when I think that if there was dosage and not an ABV misreading (which some still maintain and DDL as usual says nothing about either way), then the addition served a purpose, and DDL were damned if they did and damned if they didn’t.  The sugar (or caramel or whatever the additive was – remember, a hydrometer measures changes in density, it does not identify the source – we just assume it’s sugar) allowed the sharper bite of tannins to be tamed somewhat and made the rum a powerful, brutal drink with the jagged edges toned down…but this came at a price: it also masked the subtleties that the hardcore look for and enjoy.

Serge of WhiskyFun scored this 90 points, Cyril of DuRhum gave 86, and Henrik gave it 83 and RumShopBoy about 84, and they all made it clear what they experienced — me,  I sort of fall in the middle of the Serge’s enthusiasm and Henrik’s despite, and can call it a good rum without embarrassment – but alas, it’s not a game-changer, not a must-have, not a scene-stealer. It comes off as being just another limited edition bottling from a new independent bottler, featuring a marque that still has some lustre and shine, but not one which this rum burnishes to a high gloss.