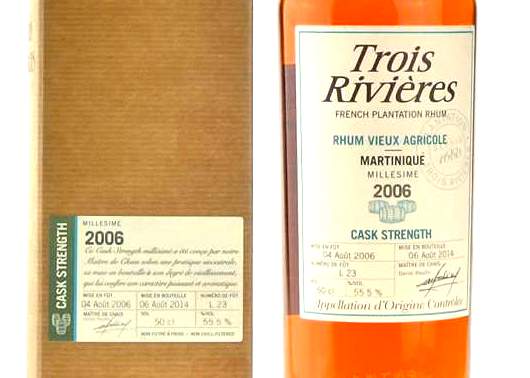 Photo (c) Excellencerhum since mine turned out to be useless

If I had a single regret about tasting this exceptional cask strength millésime rum from Trois Rivieres which was distilled in August 2006 and bottled eight years later, it’s that I neglected the opportunity to find and try the single cask version of the same vintage.  That one was bottled at 43% while the cask strength I was trying here was more than ten points higher, and it would have been fascinating to see how they ranked against each other.

Yet even without that comparison, there’s no doubt when you put together a range of variously aged agricoles (as I had the opportunity to), the Trois Rivieres Millésime 2006 is going to be right up there in the rankings when the dust settles and the arguments are over. Not just because of its strength, which is spoiling-for-a-fight-strong 55.5% ABV, but because of excellence of its assembly. Trois Rivières has made one of the best indie agricole bottlings ever (the Chantal Comte 1980), and here, for themselves, they have done something almost as good.

The Trois Rivières Brut de fût Millésime 2006 (which is its official name) is relatively unusual: it’s aged in new American oak barrels, not Limousin, and bottled at cask strength, not the more common 43-48%. And that gives it a solidity that elevates it somewhat over the standards we’ve become used to. Let’s start, as always, with the nose — it just becomes more assertive, and more clearly defined…although it seems somehow gentler (which is quite a neat trick when you think about it). It is redolent of caramel and vanilla first off, and then adds green apples, tart yoghurt, pears, white guavas, watermelon and papaya, and behind all that is a delectable series of herbs – rosemary, dill, even a hint of basil and aromatic pipe tobacco.

That’s all fine, but agricole aromas are usually a cut above the norm anyway – I’d have been disappointed if I was displeased. What really distinguishes the 2006 – the year was apparently a very good one – is the palate.  It’s a smorgasbord of macerated fruit (apricots, papaya, pineapple and apples), some light but clear florals, crushed hazelnuts, honey … and marshmallows. It all comes together in a delectable combo of sweet, crisp and mellow tastes that almost demands to be had neat — and all this time, the profile continues to be rock-solid rather than sharp or clawing, going right down the line to the fruity, tart, citrus-y finish with its last fine dusting of coffee grounds, crushed nuts and vanilla.

How they developed and assembled it in such a way that the high ABV was completely tamed and smoothened out without losing any of its force, is a mystery.  The balance and complexity harmonize well, it’s tailor made for a late night sip and it encourages rhum appreciation. It’s unlike the rhum we looked at last week, even an opposite: the La Mauny was a low-rent starter rhum made to accompany cheerful and noisily boisterous back-alley socializing, while the 2006 demands somewhat more reflection and is, perhaps, better for that purpose. But to cut a long summary short, I’m just and simply impressed, and maybe I should stop writing, go out there, buy another one, and share it with my domino-playing squaddies. Because I’m pretty sure they’d quaff this one by the glassful. 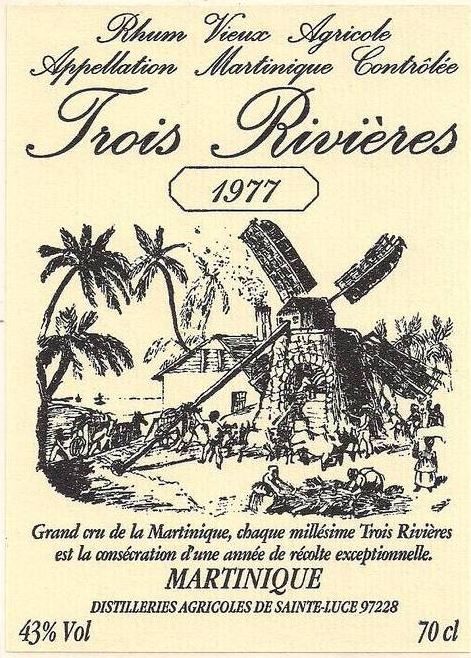 Not entirely sure how old this is…I think it was bottled in 2000 or so, making it at least a twenty three year old. AOC controlled from Martinique, pot-still-made from cane juice (of course).

Nose: Bright, flowery, quite spicy, but also very clean.  Cinnamon, breakfast spices, cloves, some dried fruits (banana, fleshy pears just starting to go).  All this is shouldered aside by a rather startling brininess and musty vegetal pungency after a while…y’know, like cardboard in an old, unaired cellar.  Not unpleasant, but not your standard fare either

Finish: Long, aromatic, dry; that anise/licorice starts to come forward at the back end, isn’t balanced as well with other notes as it could have been.

Thoughts: Great, complex nose, quite a smorgasbord on the palate, an agricole all the way through. 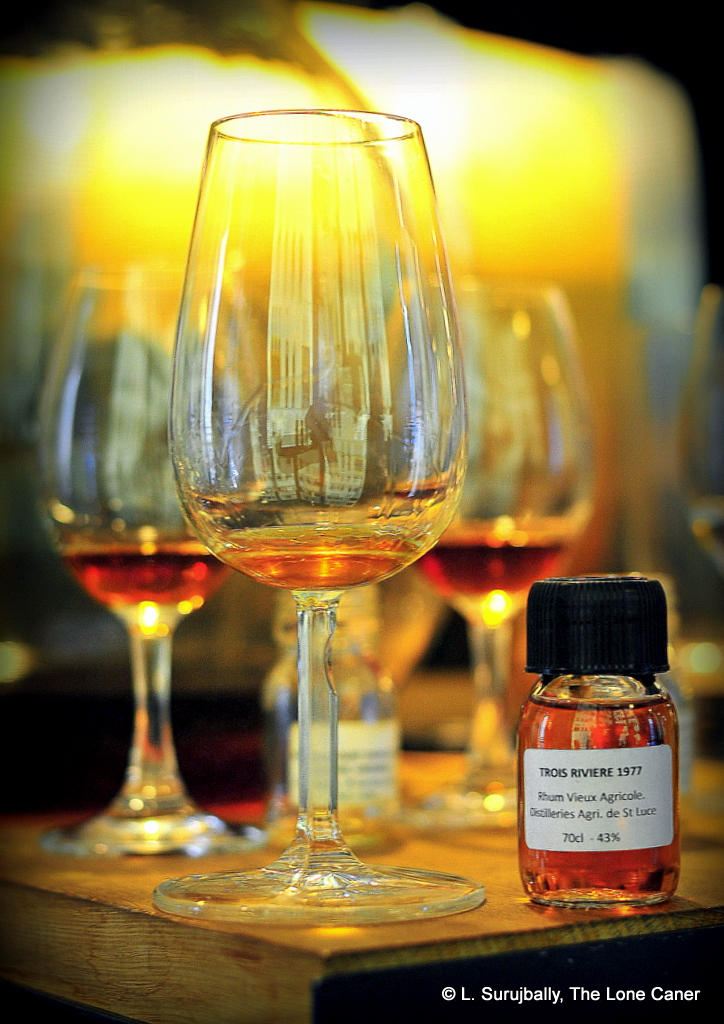