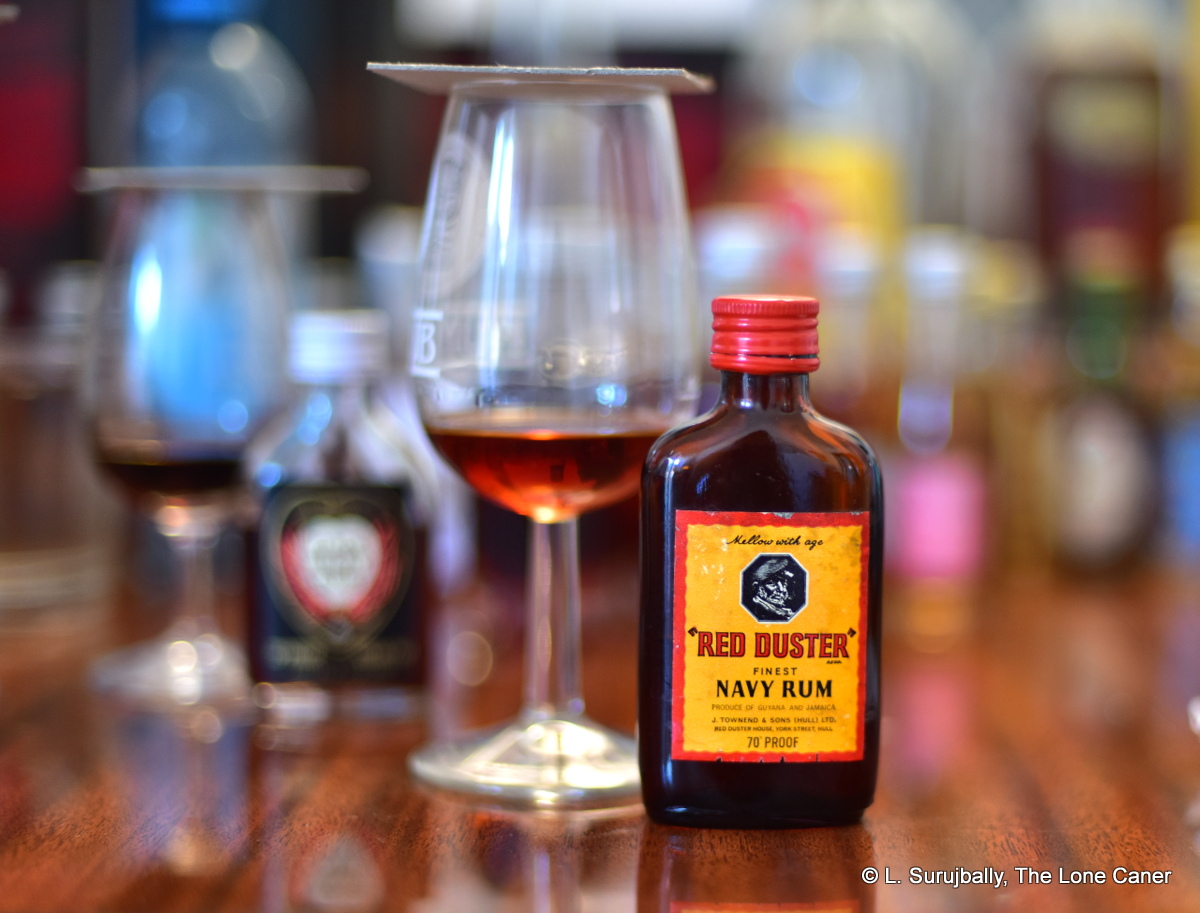 It’s in this way that you find odd rums like the Red Duster Finest Navy rum, bottled in the 1970s by the company of J. Townend & Sons. That company officially got its start in 1923, but if you look at their filings you’ll realize they took over the assets of spirits merchant John Townend, which is much older. That company was formed in Hull around 1906 by John Townend, and over four successive generations has become a fairly substantial wine and spirits distributor in England, now called The House of Townend. Unsurprisingly, they dabbled in their own bottlings from time to time, but nowadays it would appear they are primarily into distribution. Rums like the Red Duster have long been discontinued, with this one gone for thirty years or more.

The rum itself, created just after the Second World War by Charles Townend (grandfather of current company’s Managing Director, also named John) is a blend of Guyanese and Jamaican rum, not further specified – so we don’t know the proportions of each, or the source distilleries (or stills) Perusing the paperwork suggests it was always and only for sale within the UK, not export, and indeed, they were kind enough to get back to me and state that “As the company was unable to expand its five-strong off licence chain due to licensing restrictions, he [Charles Townend] concentrated on establishing spirit brands that he could sell to the pub and restaurant trade. He shipped large quantities of old rum which he blended himself in the cellars at Cave Street, Hull, from where the company traded at the time. He then broke down the rum before bottling it.”

And in a neat little info-nugget, the label notes that the name “Red Duster” came from the house of that name wherein the company once had its premises in York Street, Hull (this address and a red brick industrial-style building still exists but is taken up by another small company now). But that house in turn was named after the Red Ensign, or “Red Duster” which was the flag flown by British Merchant ships since 1707.

Nose – All irony aside, it smells dusty, dry, with red and black cherry notes and some wood shavings. Molasses, plums going overripe and – if you can believe it – sorrel and mauby (these are a red plant and a bark used for making infused drinks in parts of the West Indies). This gives the rum an amazingly peculiar and really interesting taste that resists easy categorization.

Palate – Sweet, dry, dusty, spicy. Fruity (dark stuff like prunes and plums) with a touch of lemon. There’s some more cherries and overripe blackberries, but overall it tastes thin and weak, not aggressive at all. Some mild licorice brings up the back end, like me ambling late to a meeting I don’t want to be in.

Finish – Surprise surprise, it’s a long and fruity finish with a good dollop of vanilla and molasses, and it presents a deep, sweet and slightly dry conclusion. Not thick and solid, a little wispy, really, but still nice.

Thoughts – Blunt force trauma is not this rum’s forte, and why they would feel it necessary to release a rum with the sobriquet of “Navy” at 40% is a mystery. It was just and always a tipple for the eating and pubbing public, without pretensions to grandeur or historical heritage of any kind. Just as well, because it lacks the character and force of today’s rums of this kind, and attempting to disassemble the origins is pointless. If they had pickled Nelson in a barrel of this stuff, he might well have climbed out and thrown his own self overboard before making it halfway home…but the humourist in me suggests he would have had a last sip before doing so.