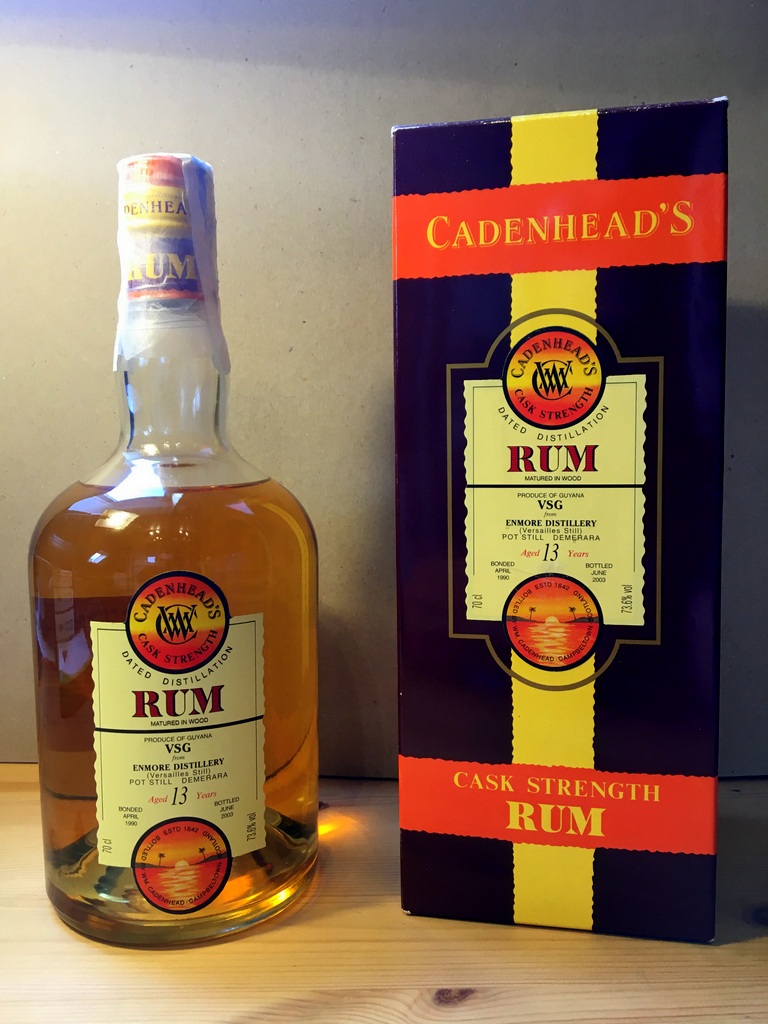 Cadenhead’s defiantly massive codpiece, this 73.6% Mudland slugger, was among the strongest rums they ever unleashed upon an unsuspecting public, in 2003 1; it took no prisoners and provided no apologies and was stubbornly, intransigently, mulishly what it was – an undiluted can of pure whup-ass. It must have scared the living bejeezus out of so many people when it was released, that all existing bottles were carefully hidden and buried and squirelled away, and blood oaths were sworn to preserve forever the silence of the grave upon its owners.

Few rums this powerful outside the famed 151s were ever issued in the days before The Age, a genteel time of light and inoffensive blends, when noses were sniffily raised at the agricoles’ overgenerous 50º, and when 46% was considered shockingly outré, almost uncouth…not really fit for civilized company. Even Velier, who practically redefined what Demeraras could be, balked at going too far in the proof direction back then. And yet, the Cadenhead rum really wasn’t that bad – though it must be mentioned that the growly ABV was to some extent also to its detriment.

That it exuded wild pot-still badassery in all directions was beyond question, and its nose was at pains to demonstrate it wasn’t bluffing. It was pungent. It was sharp. It threw around enormous notes of brine, pineapple, citrus, gooseberries and 5-finger. Some caramel. Some vanilla. There were other hints of sorrel, anise and hard Thai yellow mangoes, and yet, oddly, hardly any of the standard spicy and lumber-related aspects that could have been expected from the Versailles single wooden pot still of origin. Paradoxically, the very strength that may have recommended it to many, proved a vehicle to mask the subtleties of the still of origin.

And it didn’t slow down in the slightest when sipped, landing on the tongue with a kind of blunt force trauma that might actually be illegal in some states. Heavy salt caramel ice cream, red olives and brine, leather, oaky spice and aromatic tobacco led the charge. Fruits were there, both sharp and ripe — prunes, blackberries, black grapes, apples — but these receded, fast, and were briefly replaced by anise, molasses and white chocolate almost too buried under the avalanche of oomph to stand out. The tastes of black bread and sour cream, cream cheese, honey, tobacco, plus a last welcome taste of strawberries and whipped cream weren’t bad at all, just too damned fleeting to be appreciated before poof, they vanished. 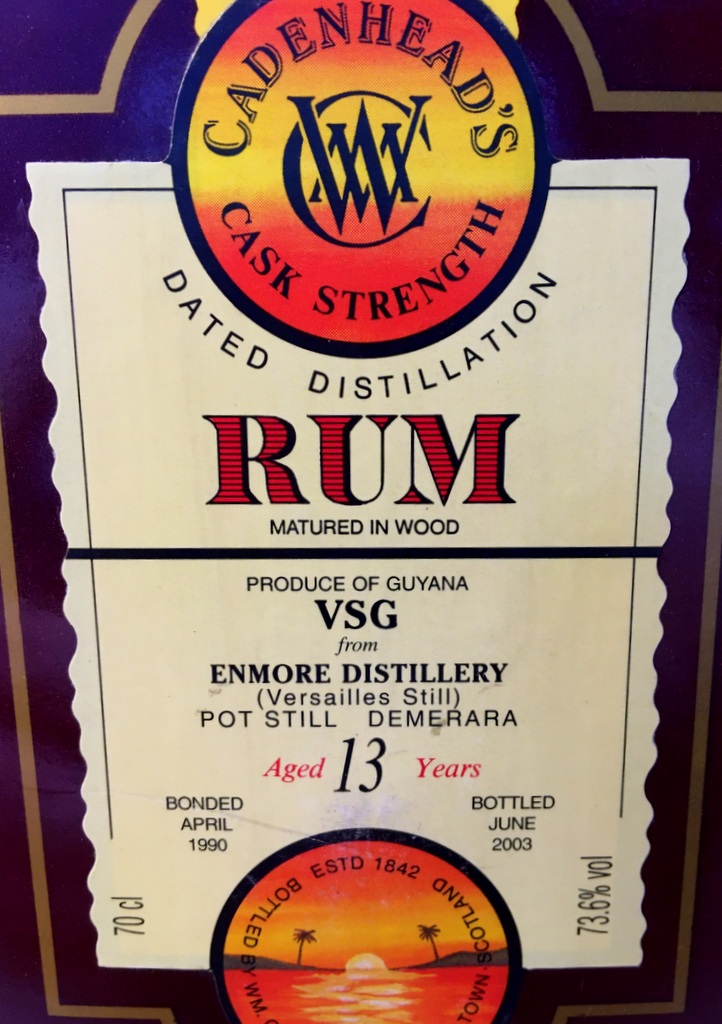 Points for the finish which calmed the **** down: it was long and warm instead of crazy hot, creamy with caramel, toffee, salt, chocolate plus coffee grounds and aromatic tobacco — so, in brief, really nice — but the fruits that should have acted in counterpoint, were, alas, long gone.

All that said, we’re talking about a pretty complex rum here, lots of stuff careening off the wall, with a sort of supercharged glee that might be displayed by a portasan to which someone strapped wheels and a jet engine. That’s the problem, for me, it’s too much show and no go, and even letting it rest was insufficient to tone it down and allow a more leisurely examination of its profile. The strength was there, it squatted toad-like on the senses, and it masked nuances a slightly weaker drink might have showcased more effectively (so water was a must with it).

But I’ll give it a guarded recommendation anyway – as one friend of mine says, he prefers the VSG taste profile over any other Demerara, so a rum like this is definitely for those like him – though I think care should be taken here, and as with all Versailles rums, it will be hit or miss for many. After all, just because it’s enough of a bruiser to intoxicate Opthimus Prime does not elevate it to cult status, and is no reason to casually get one yourself just because it does.

This thing had some interesting effects: it made me realize that I can’t count properly, as my list of 21 of the strongest rums in the world now contains 33; that Cadenhead doesn’t just not have a list of what the letter-marques on their Dated Distillation series mean, but don’t have a comprehensive list of their releases either and (c) their staff are really quite helpful and want to assist in such obscure quests even at the expense of their own sanity.

My remarks in the opening paragraph relate to the rum’s almost complete lack of an online footprint – until this review takes off, you will find only a single reference to it. So some thanks are in order, to all those people who helped me trace the thing. Alex Van der Veer, cheapeau mon ami. Morton Pedersen over at the Cadenheads fans’ FB page, thanks. Nathan and Mitch at Cadenhead (UK), appreciate your time and effort; same goes to Angus and Kiss in the Denmark shop, who really tried. And most of all, Alex (again) and Jörn Kielhorn, who got me the pictures I needed.