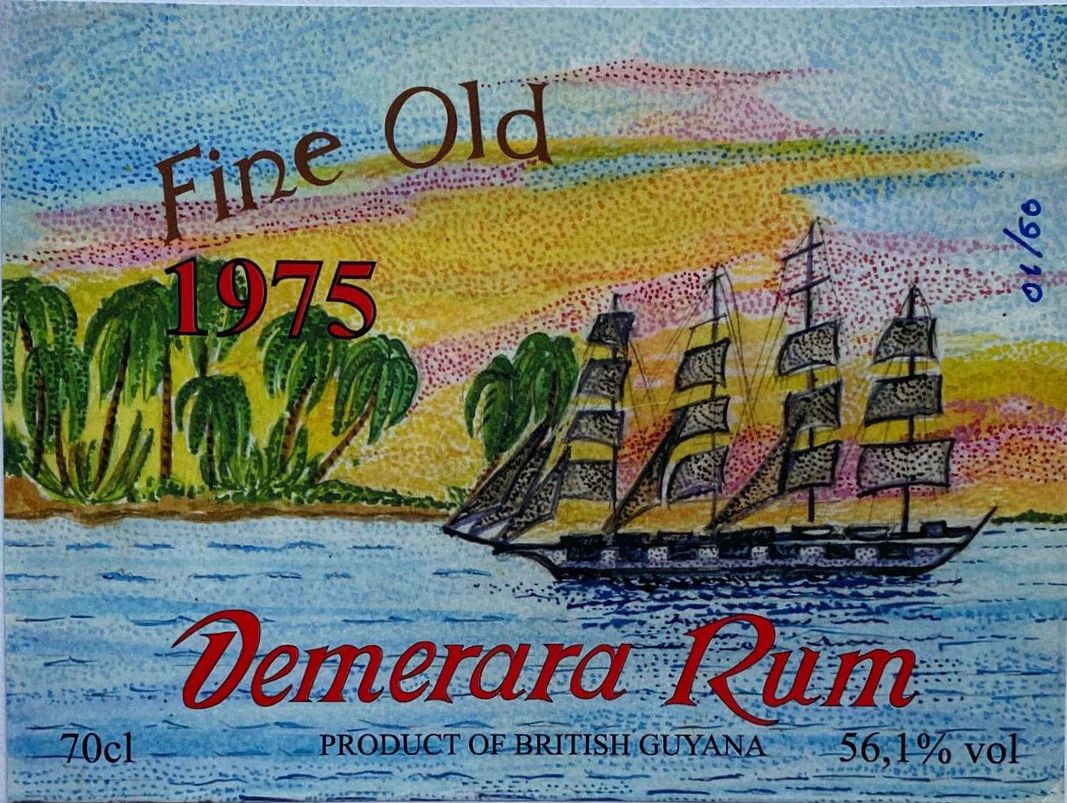 In spite of rums from various 1970s years having been issued throughout that period (many are still around and about and surfacing every now and then at wallet-excavating prices), it is my contention that 1974-1975 were the real years that disco came to town. No other years from the last century except perhaps 1986 resonate more with rumistas; no other years have as many Demeraras of such profound age, of such amazing quality, issued by as many different houses. I’d like to say I’ve lost count of the amount of off-the-scale ‘75s I’ve tasted, but that would be a damned lie, because I remember them all, right back to the first one I tried, the Berry Brothers & Rudd PM 1975. I still recall the rich yet delicate solidity of the Norse Cask, the inky beauty of the Cadenhead Green label 40.6%, the black licorice and sweet tobacco of the Rendsburger, Velier’s own 1975...and now, here is another one, dredged up by another Italian outfit we never heard of before and which, sadly, maybe we never will again. Unlike Norse Cask, it has not vanished, just never bothered to have a digital footprint; in so doing it has left us only this equally overlooked and forgotten bottle of spiritous gold, and some more recent bottlings known only to ur-geeks and deep-divers. 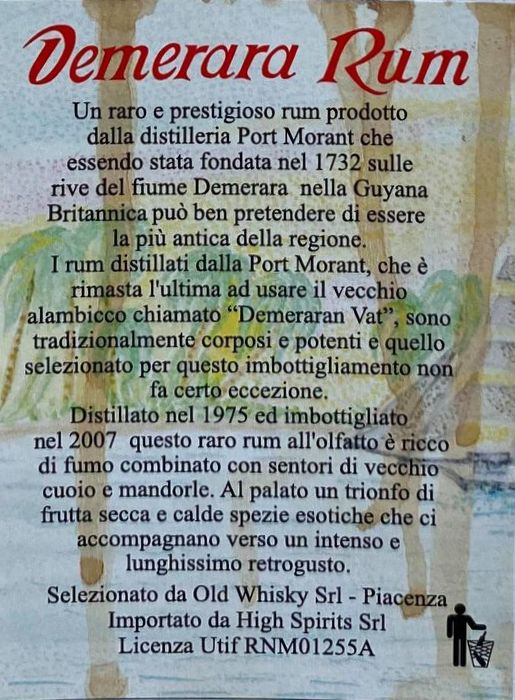 For the kitch, I’m afraid there is not much. Thanks to my impeccably fluent lack of Italian, I can tell you it’s a 1975 Port Mourant that was bottled in 2007, and it appears to be one of those single barrel releases often indulged in by importers – this time an Italian outfit called High Spirits, which doesn’t exist beyond its odd one-page website that leads nowhere and says nothing – see below for some notes on this. The rum is 56.1%, dark red brown….

…and smells absolutely magnificent. The aromas are, in a word, loaded. The distinctiveness of the PM still comes through in a wave of aromatic wine-infused cigarillos’ tobacco, coffee, bitter chocolate and, yes, licorice. You pause, enjoy this, sniff appreciatively, dive in for Round 2 and brace for the second wave. This emerges after a few minutes: and is more musky, darker in tone shot through with jagged flashes of tarter sharper notes: muscovado sugar, molasses, plums, blackberries, ripe black cherries, bananas, all the best part of, oh, the Norse Cask, of which this is undoubtedly the equal. And then there’s a bit extra for the fans, before the taste: cinnamon, vanilla, herbs, and (I kid you not) even a touch of pine resin.

And the profile, thank God, doesn’t let us down (think of what a waste that would have been, after all this time). People like me use the nose a lot to tease out flavour-notes but the majority of drinkers consider only the taste, and here, they’ll have nothing to complain about, because it continues and underlines everything the smells had promised. Again, thick and pungent with bark and herbs and fruit: plums, dark ripe cherries, ripe mangoes, bags of licorice, and an interesting combo of mauby and sorrel. Caramel and toffee and chocolate and cafe-au-lait dosed with a generous helping of brown sugar and whipped cream, each flavour clear and distinct and outright delicious – the balance of the various soft, sharp, tart and other components is outstanding. Even the finish does the rum honour – it’s long, fragrant and lasting and if it could be a colour, it would be dark brown-red – the hues of licorice, nuts, raisins, dates, stewed apples and caramel. 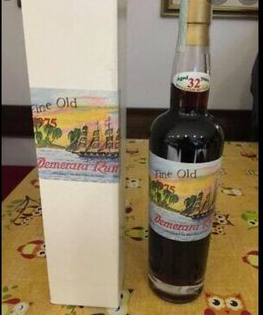 There’s just so much here. It’s so rich, smooth, warm, complex, inviting, tasty, sensual and outright delicious. Just as you put down the glass and finish scribbling what you optimistically think is the final tasting note, you burp and think of yet another aspect you’ve overlooked. Yes, High Spirits probably bought the barrel from a broker or an indifferent Scottish whisky maker who passed it by, but whoever selected it knew what they were doing, because they found and teased out the muscular poetry of the core distillate that in other hands could (and in its knock-offs sometimes does) turn into a schlocky muddled mess.

At end, over and beyond how it tasted, I find myself coming back to that age. Thirty two years. Such rums are getting rarer all the time. Silver Seal and Moon imports and Cadenhead and G&M occasionally upchuck one or two in the twenties, and yes, occasionally a house in Europe will issue a rum in the thirties (like CDI did with its 33YO Hong Kong Hampden, or those 1984 Monymusks that are popping up), but the big new houses are mostly remaining in the teens, and tropical ageing is the new thing which further suggests a diminution of the majority of aged bottlings. To see one like this, with the barrel slowly seeping its influence into the rum over three decades from a time most rum lovers were unborn and the rumworld we live in undreamt, is an experience not to be missed if one ever has the chance. 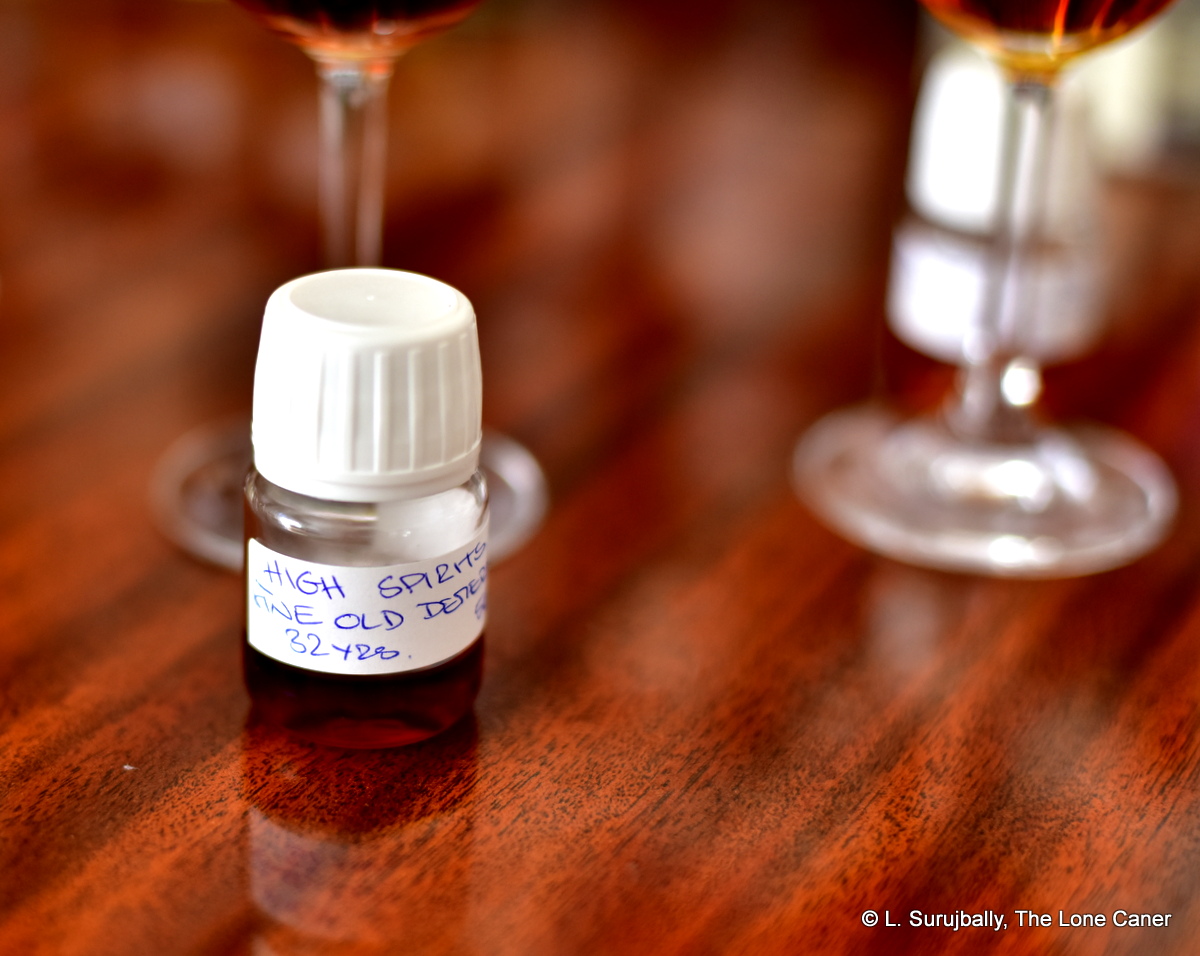