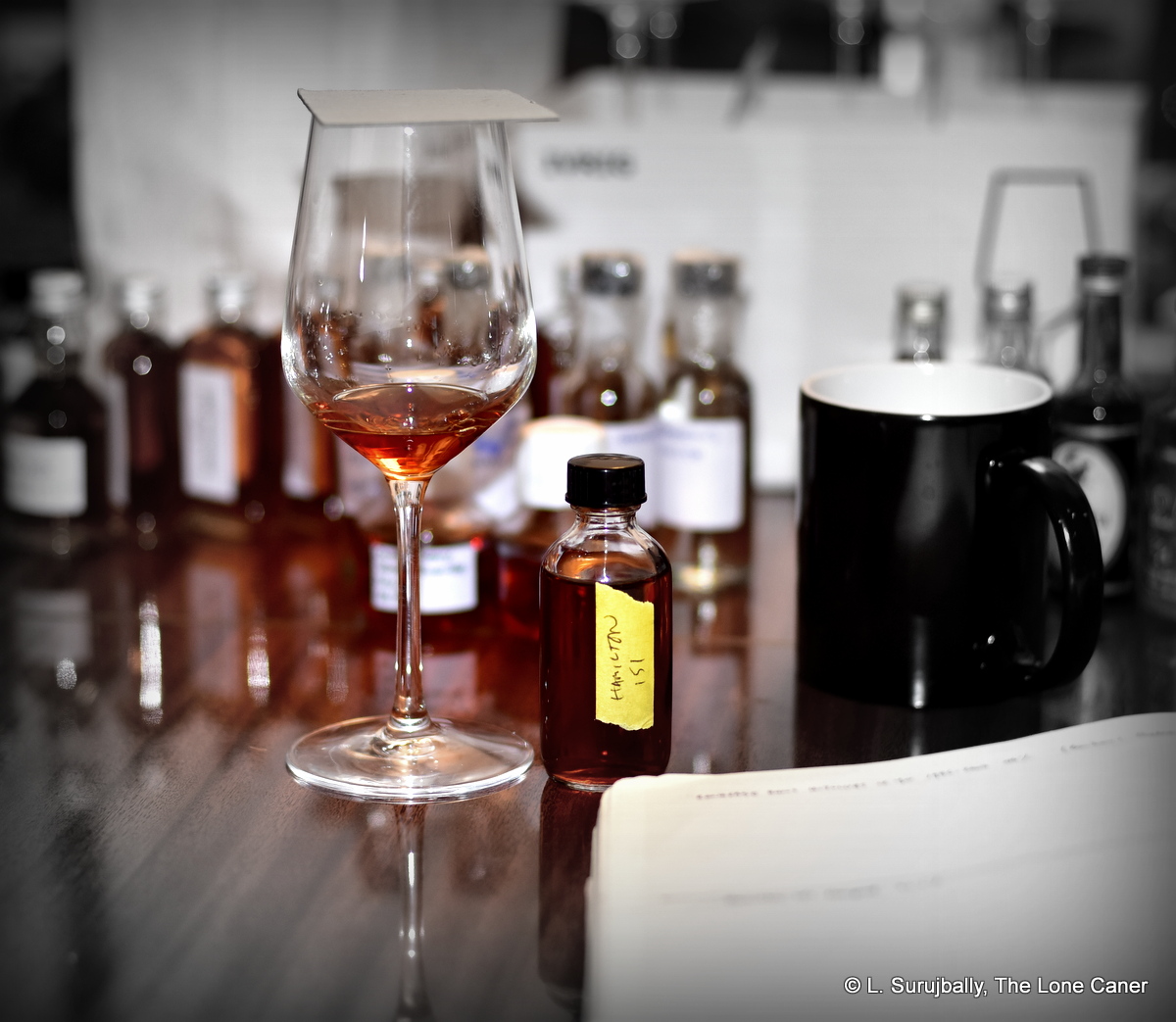 Although just about every conversation about the Hamilton 151 remarks on its purpose to replicate the Lemon Hart 151 as a basic high proof bar-room mixer, this is a common misconception – in point of fact its stated objective was to be better than Lemon Hart. And if its reputation has been solidly entrenched as a staple of that aspect of the drinking world, then it is because it really is one of the few 151s to satisfy both rum drinkers and cocktail shakers with its quality in a way the LH did not always.

Back in the late 2000s / early 2010s Lemon Hart — for whatever reason — was having real trouble releasing its signature 151, and it sporadically went on and off the market, popping back on the scene with a redesigned label in 2012 before going AWOL again a couple of years later. Aside from Bacardi’s own 151, it had long been a fixture of the bar scene, even preceding the tiki craze of the mid 1930s (some of this backstory is covered in the History of the 151s).  Into this breach came Ed Hamilton, the founder of the Ministry of Rum website and its associated discussion forum, author of Rums of the Eastern Caribbean and an acknowledged early rum guru from the dawn of the rum renaissance.  As he recounts in a 2018 interview (from around timestamp 00:41:50), he decided to create his own line of Demerara rums, both 86 and 151 proof and while barred from using the word “Demerara” for trademark reasons, he did manage to issue the new rums in 2015 and they have been on the market ever since.

Whether Hamilton 151 has replaced or superseded the Lemon Hart is an open question best left to an individual’s personal experience, but to compare them directly is actually apples and oranges to some extent, because the LH version blends Guyanese, Jamaican and Barbados rums while Hamilton’s is Guyanese only – though likely a blend of more than one still.  But certainly there’s at least some significant element of the wooden stills in there, because the profile is unmistakable. 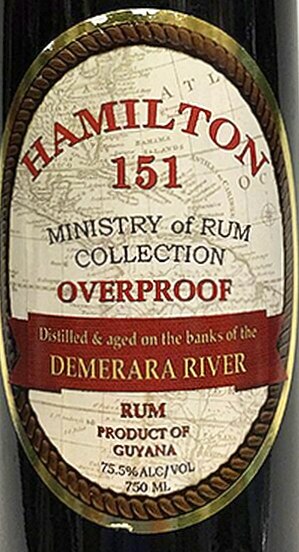 It is, in short, a powerful wooden fruit bomb, one which initially sits and broods in the glass, dark and menacing, and needs to sit and breathe for a while.  Fumes of prunes, plums, blackcurrants and raspberries rise as if from a grumbling and stuttering half-dormant volcano, moderated by tarter, sharper flavours of damp, sweet, wine-infused tobacco, bitter chocolate, ginger and anise. The aromas are so deep it’s hard to believe it’s so young — the distillate is aged around five years or less in Guyana as far as I know, then shipped in bulk to the USA for bottling. But aromatic it is, to a fault.

It’s also hard to see the Hamilton 151 as “only” a bar-based cocktail mixer when one tries it like I did, neat. The taste is very strong, very powerful — given the 75.5% ABV, caution is of course in order —  yet not sharp so much as firm, a flavoured cricket bat stroking the tongue, tasting thirty proof points lower. There’s the piquance of ginger, red wine, raisins, dark fruits, followed by vanilla, caramel, cloves, licorice, pencil shavings, and cedar planks, melding an initially simple-seeming rum profile with something more complex and providing a texture that can be both coked up or had by itself.  Me, I could as easily sip it as dunk it into a double espresso, and then pour that over a vanilla ice cream.  Even the long lasting finish gives up a few extra points, and it closes the experience with dark red cherries, plums and prunes again, as well as coriander, cumin, cloves and toffee. Pretty good in comparison to a lot of other 151s I’ve tried over the years.

Frankly, I found the rum revelatory, even kind of quietly amazing.  Sure, it hit on all the expected notes, and the quality didn’t ascend to completely new heights (though it scaled several rises of its own).  But neither did it collapse and fall like a rock. In its own way, the rum redefined a good 151, moving it away from being a back-alley palate-mugger, to more of a semi-civilized, tux-clad thug. It might not be as good as a high-proofed ultra-aged Velier from the Age….but it wasn’t entirely removed from that level either. Drinking it, standing on the foothill of its taste, you can see the mountaintop to which it could aspire.