This BBR bottling predates those more recent tropically-aged estate releases and hearkens back to what I sort of suspect will be a fond memory for the annually increasing number of Old Rum Farts – those days when all of Hampden’s output was sent for further ageing and bottling to Europe and only independents were releasing them at cask strength. Berry Brothers & Rudd, that famed spirits establishment which has been in existence in London through just about all of Britain’s imperial and post-war history, certainly channels that genteel, old-world sense of style, with its prim and near-Edwardian-style labels.

What those labels don’t give us is enough data – by our rather more exacting current standards anyway. We know it’s Jamaican, Hampden, distilled in 1990, 46% ABV, and from the osmosis bleeding through Facebook, we also know it’s a completely pot still rum, bottled in 2007, a continentally-aged 17 year old. Marius of Single Cask Rum whose article on Hampden is worth a read for the curious, wrote that the 1990 bulk export batch – there was only one or two a year, rarely more – was of marque C<H> “Continental Hampden”, which would place it in the high range of ester-land… 1300-1400 grams per hectoliter of pure alcohol (g/hlpa); only the DOK is higher, going to the legal maximum of 1500-1600. 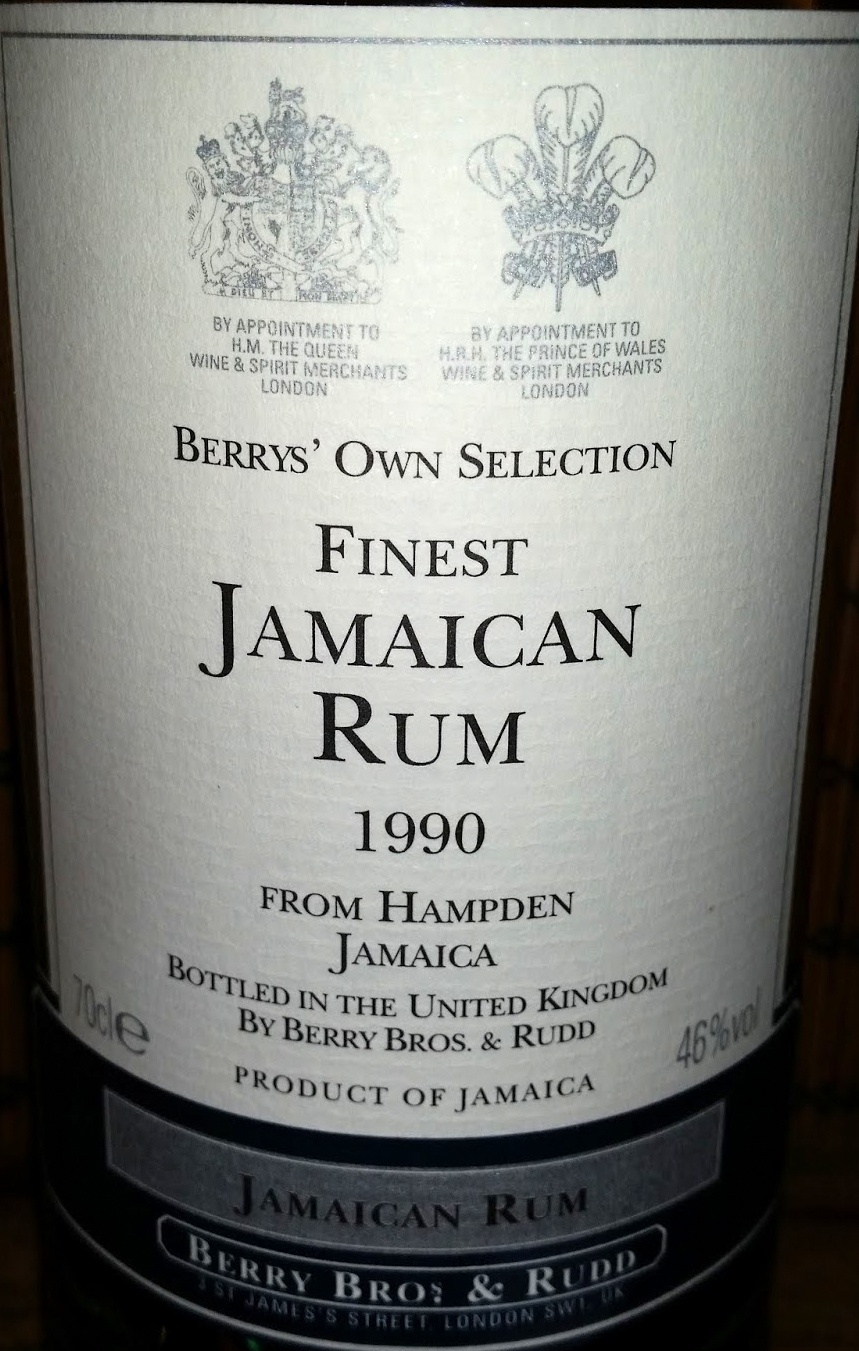 Yet overall, it’s not fierce and demanding and overdone. The palate, like the nose, also demonstrated this admirable self-control, and together with the lower strength, this allowed the glittering blades of over-fruity sharpness that usually distinguishes such rums, to be dialled down and savoured more than feared or watched out for. The profile was coruscating notes in a complex almost-sour fruit salad consisting of pineapples, kiwi fruit, green grapes, unripe apples and pears, sprinkled over with cardamom and a pinch of camomile. It is also rich and creamy, tastes a bit nutty, and the lemony background went well with the vaguely salty background that gave the whole thing a tequila like aspect that somehow worked really well. The finish was medium long, mostly wrapping up the show content to stay pretty simple and straightforward – lemon zest, salt butter, pineapple, caramel and a twist of vanilla. Lovely.

Summing up, the BBR Hampden is not like the high end muscle-beach monsters of the TECC and the TECA, or even a dialled down DOK; nor is it like those New Jamaicans high-proofs that are coming out now, which sport lots of tropical ageing and dense, deep profiles. You can spot the core DNA, though, because that’s too distinct to miss – it’s gentler, lighter, yet also crisply fruity and very precise, just not as forceful as those 60%-and-over ester fruit bombs. I wonder whether that’s the strength – probably, yes.

But if you’ll forgive the metaphysical license here, what it really does is evoke and bring to my mind long unthought memories: of rummaging through and inhaling the scent of just-arrived vinyl LPs in Matt’s Record Bar in GT when I was a kid with no money; of overstuffed sofas and armchairs covered with thick smelly plastic sheeting, resting in old wooden houses with Demerara shutters and Berbice chairs where the men would sip their rums and “speak of affairs” on hot Saturday afternoons and me hanging around hoping for a sip and a word. The Japanese have a word for this – natsukashii – which refers to some small thing that brings you suddenly back to fond memories — not with longing for what’s gone, but with an appreciation of all the good times. I don’t want to make out that this is the experience others will have, just that this is what it did for me — but in my opinion, any rum that can do this even half as well, for anyone, is definitely worth a try, even leaving aside the lovely scents and tastes which it presents.

Two other reviewers have looked at this rum in the past: