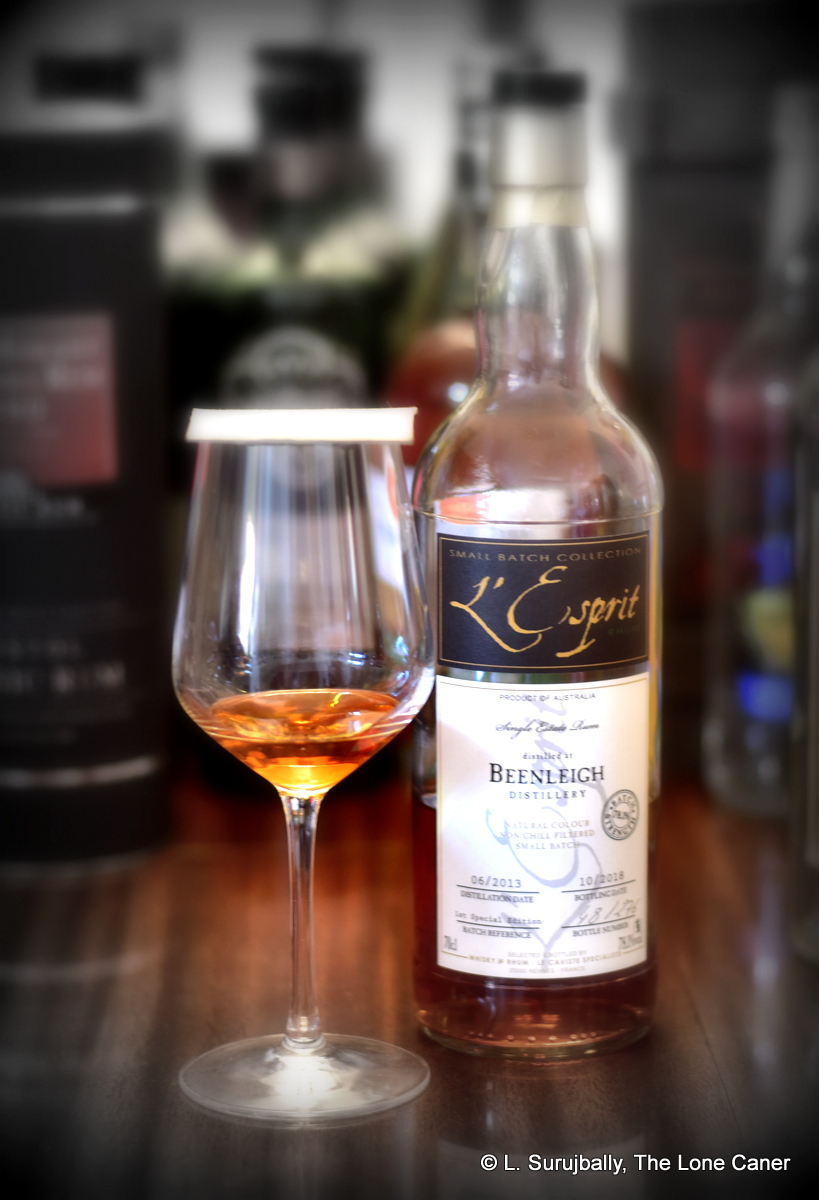 It is bottled by L’Esprit, the Brittany-based company that provided two of the most powerful whites I’ve ever tried (from Fiji and Guyana); and distilled by the Australian distillery Beenleigh, which is practically unknown outside of Oz, but which has been in operation since before 1884 (see other notes, below) and which I’ve mentioned briefly in two heritage Rumaniacs reviews, the Stubbs Queensland White, and the Inner Circle “Green Dot” rum. And it’s stuffed into specially hardened glass at a palate-dissolving, tears-inducing 78.1%, which is sure to make any lover of machismo grin, flex the glutes and the pecs, and dive right in.

To say it’s hot may be understating the matter. This thing noses like an unexpected slap from your loved one, the sweet force of which has to be watched out for and mitigated as best one can. It’s sizzling, it’s sharp and quite sweet – caramel, butterscotch, apricots, peaches and cherries in syrup…on the icing of a vanilla cake. And even with the strength I could, after a while, smell very ripe, almost spoiling mangoes and kiwi fruit, with cereals, cinnamon, and milk…plus more chopped fruit.

The palate, well, this was very nice. Initially it’s all passion fruit, five-finger, sorrel, tart soursop, salt caramel ice cream (Hagen-Dasz, of course). It remains hot and sharp to a fault, which you can navigate with your sanity and glottis intact only only via paranoid caution and really small sips. It presented as nutty, creamy, fruity (of red, yellow, ripe variety, so choose for yourself), not crisp per se, just damn solid, as firm as a posturepedic mattress on sale at your local furniture store. Plus the headboard, which hits you several times, hard. Unsurprisingly, the finish is a DeMille-style biblical epic, long, hot, breathy, practically ever-lasting, leaving behind good memories of cereals, cream, salt butter, and thick ripe fruit. These were admittedly somewhat standard, and perhaps unexceptional…but it certainly didn’t sink the experience.

I still remember how unusual the Aussie Bundaberg had been back in the day (as I recall all traumatic rum encounters in my genuflectory come-to-Jesus moments) but no matter how polarizing it was, you couldn’t deny it had real balls, real character. L’Esprit’s Beenleigh was nowhere near that kind of opinion-inducing love-it-or-hate-it style, but that aside, I must say that it channels Conrad well, it’s major sound and fury, a mad, testosterone-addled wild-eyed piece of the rum zeitgeist, with wild pendulum swings from the sedate to the insane, the smooth to the storming, and a hell of a lot of fun to try. I don’t know how I missed including it in my list of the most powerful rums of the world, but for sure I’ve updated the list to make sure it’s in there.

One Response to “L’Esprit Beenleigh 2013 5YO Australian Rum – Review”