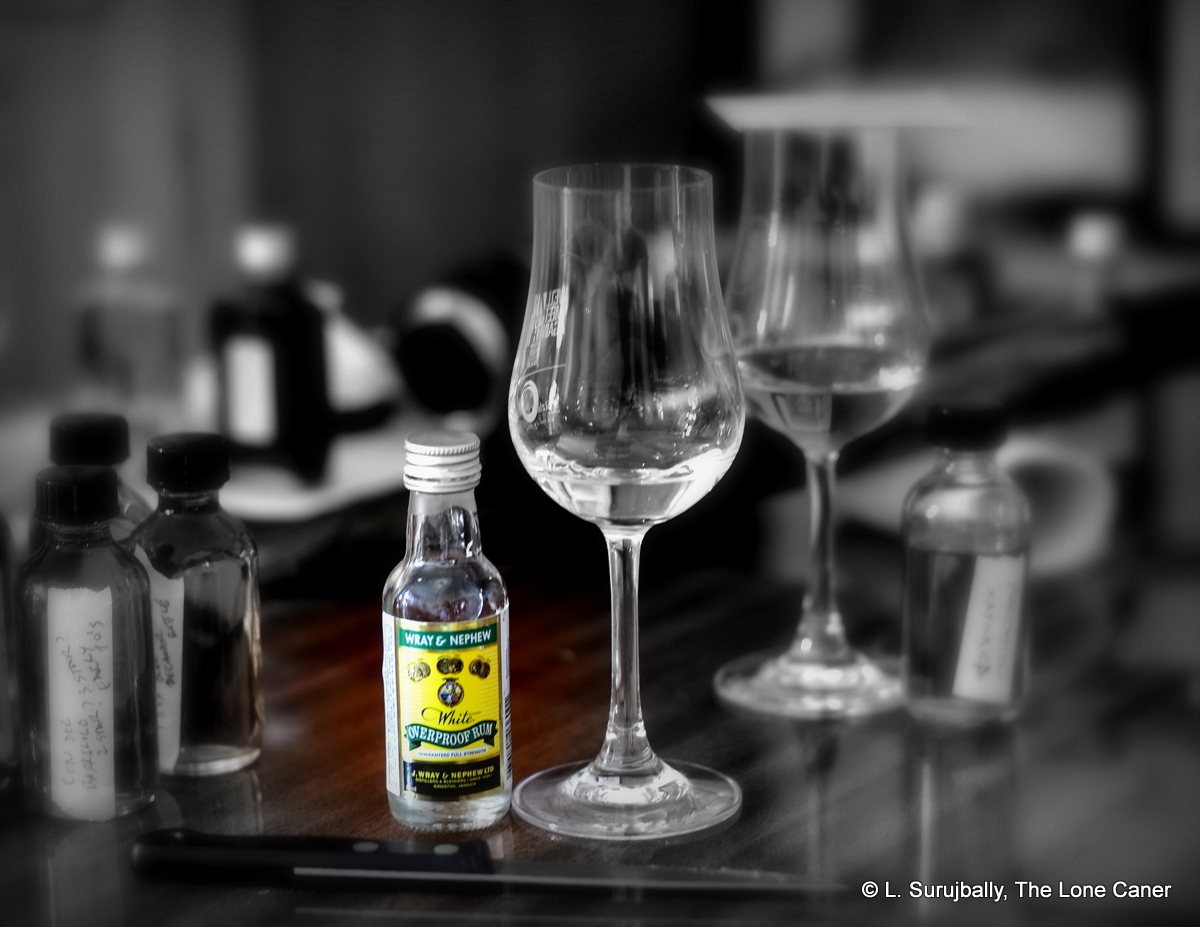 At the opposite end of the scale from the elegant and complex mid-range rum of the Appleton 12 year old – a Key Rum in its own right – lies that long-standing rum favourite of proles and puritans, princes and peasants — the rough ‘n’ tough, cheerfully cussin’ and eight-pack powerful rippedness of the J. Wray & Nephew White overproof, an unaged white rum bottled at a barely bearable 63%, and whose screaming yellow and green label is a fixture in just about every bar around the world I’ve ever been in and escorted out of, head held high and feet held higher.

This is a rum that was one of the first I ever wrote about back in the day when I wasn’t handing out scores, a regular fixture on the cocktail circuit, and an enormously popular rum even after all these years. It sells like crazy both locally and in foreign lands, is bought by poor and rich alike, and no-one who’s ever penned a rum review could dare ignore it (nor should they). I don’t know what its sales numbers are like, but I honestly believe that if one goes just by word of mouth, online mentions and perusal of any bar’s rumshelf, then this must be one of the most well regarded Jamaican (or even West Indian) rums on the planet, as well as one of the most versatile.

Even in its home country the rum has enormous street cred. Like the Guyanese Superior High Wine, it’s a local staple of the drinking scene and supposedly accounts for more than three quarters of all rum sold in Jamaica, and it is tightly woven into the entire cultural fabric of the island. It’s to be found at every bottom-house lime, jump-up or get-together. Every household – expatriate or homeboys – has a bottle taking up shelf space, for pleasure, for business, for friends or for medicinal purposes. It has all sorts of social traditions: crack a bottle and immediately you pour a capful on the ground to return some to those who aren’t with you. Have a housewarming, and grace the floor with a drop or two; touch of the rheumatiz? – rub dem joints with a shot; mek a pickney…put a dab ‘pon he forehead if he sick; got a cold…tek a shot and rub a shot. And so on.

This is not even counting its extraordinary market penetration in the tiki and bar scene (Martin Cate remarked that the White with Ting is the greatest highball in the world). There aren’t many rums in the world which have such high brand awareness, or this kind of enduring popularity across all strata of society. Like the Appleton 12, it almost stands in for all of Jamaica in a way all of its competitors, old and new, seek to emulate. What’s behind it? Is it the way it smells, the way it tastes? Is it the affordable price, the strength? The marketing? Because sure as hell, it ranks high in all the metrics that make a rum visible and appreciated, and that’s even with the New Jamaicans from Worthy park and Hampden snapping at its heels. 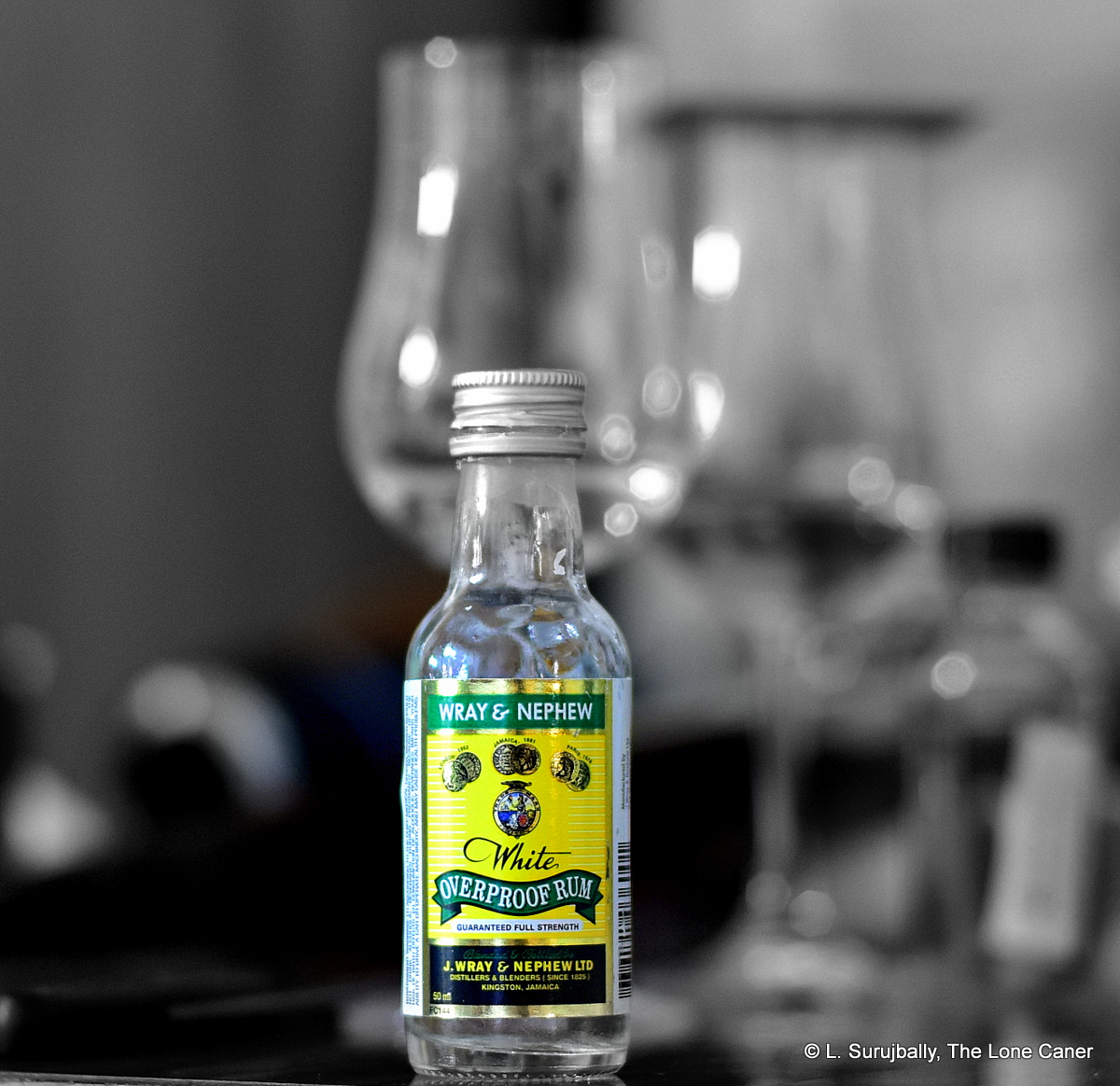 Coming back at it after so many years made me remember something of its fierce and uncompromising nature which so startled me back in 2010. It’s a pot and column still blend (and always has been), yet one could be forgiven for thinking that here, the raw and rank pot-still hooligan took over and kicked column’s battie. It reeked of glue and acetones mixed up with a bit of gasoline good only for 1950s-era Land Rovers. What was interesting about it was the pungent herbal and grassy background, the rotting fruits and funky pineapple and black bananas, flowers, sugar water, smoke, cinnamon, dill, all sharp and delivered with serious aggro.

Taste wise, it was clear that the thing was a mixing agent, far too sharp and flavourful to have by itself, though I know most Islanders would take it with ice and coconut water, or in a more conventional mix. It presented rough and raw and joyous and sweaty and was definitely not for the meek and mild of disposition, wherein lay its attraction — because in that fierce uniqueness of profile lay the character which we look for in rums we remember forever. Here, that was conveyed by a sharp and powerful series of tastes – rotten fruit (especially bananas), orange peel, pineapples, soursop and creamy tart unsweetened fresh yoghurt. There was something of the fuel-reek of a smoky kerosene stove floating around, cloves, licorice, peanut, mint, bitter chocolate. It was a little dry, and had no shortage of funk yet remained clearly separable from Hampden and Worthy Park rums, and reminded me more of a Smith & Cross or Rum Fire, especially when considering the long, dry, sharp finish with its citrus and pineapple and wood-chip notes that took the whole experience to its long and rather violent (if tasty) conclusion.

So maybe it’s all of these things I wrote about – taste, price, marketing, strength, visibility, reputation. But unlike many of the key rums in this series, it remains fresh and vibrant year in and year out. I would not say it’s a gateway rum like the Pusser’s 15 or the Diplo Res Ex or the El Dorado 21, those semi-civilized drinks which introduce us to the sippers and which we one day move beyond. It exists at the intersection of price and quality and funk and taste, and skates that delicate line between too much and too little, too rough and almost-refined. You can equally have it in a high-class bar in Manhattan, or from cheap plastic tumblers with Ting while bangin’ down de dominos in the sweltering heat of a Trenchtown yard. In its appeal to all the classes of society that choose it, you can see a Key Rum in action: and for all these reasons, it remains, even after all the years it’s been available, one of the most popular — even one of the best — rums of its kind ever made, in Jamaica, in the West Indies, or, for that matter, anywhere else.