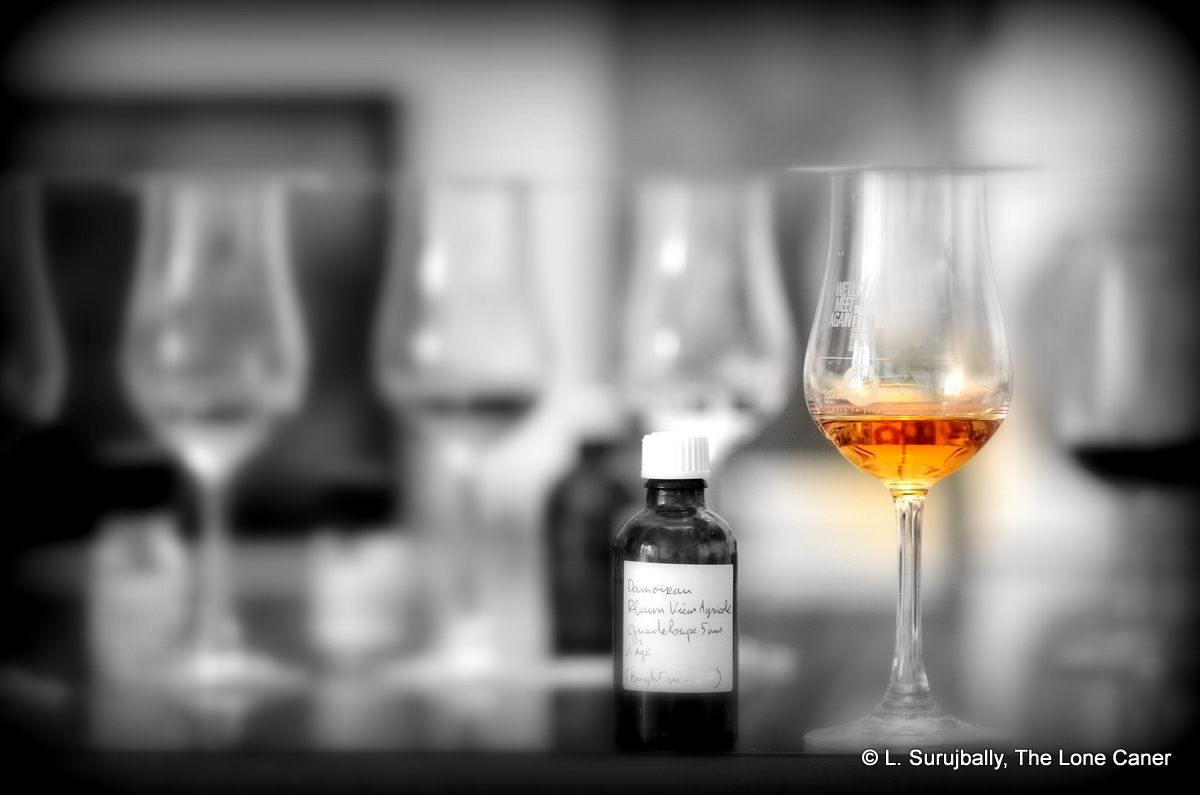 The French islands provide a reviewer with a peculiar problem when trying to pick a single rum as being a “Key” anything. This is largely because Martinique and Guadeloupe are almost alone in the world in possessing such a gathering of world-famous rum distilleries in such a concentrated geographical space (a comparison to Islay, say, is not entirely out to lunch). Several Caribbean islands have a single large distiller (St. Lucia, Trinidad) or two (Grenada) or a few (Cuba, Barbados, Jamaica), and Haiti of course comes up for special mention — but none have so many whose names resound through the rumiverse.  So how to pick just one?

The selection of the first of what will be several candidates from the French islands – because to limit oneself just to one or two or even three is to do the entire subset of agricole rums an enormous disservice – is made even more difficult by the fact that Guadeloupe is not seen as a “pure” agricole maker. This is primarily because, of course, they sometimes mess around with both molasses and cane juice styles of rhum, and have never actively sought the AOC designation which so enhances the street cred of rhums from Martinique. 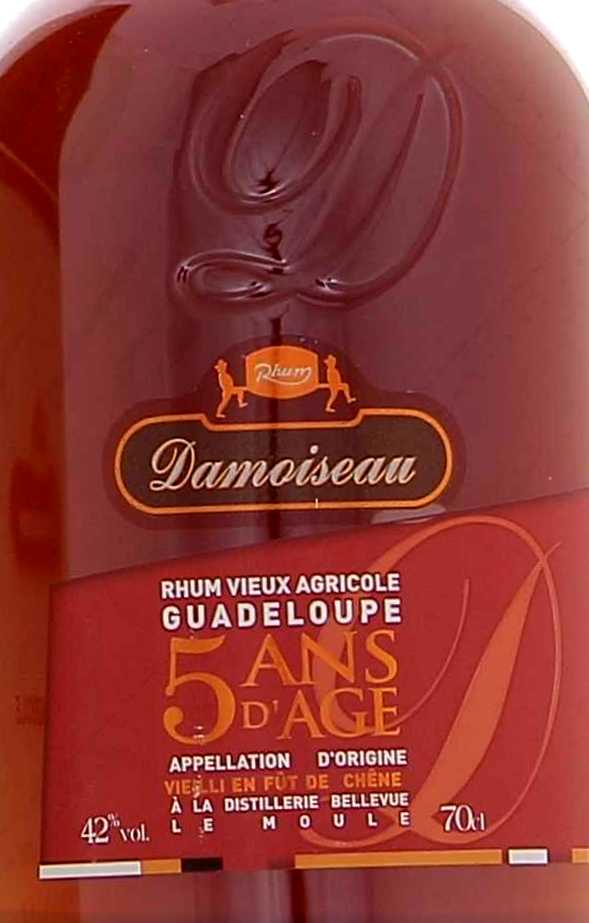 But even so, I like the rhums of Guadeloupe (Grande Terre and Basse Terre and Marie-Galante) — a lot. To me, the work of Gardal, Karukera, Bielle, Longueteau, Severin, Bellevue, Montebello, Pere Labat, Reimonenq, Capovilla and Damoiseau are as good as any the world over, and behind them all still reverbrates the majestic quality of Courcelles, the one that switched me on to agricoles all those years ago when the Little Caner was not yet the Big Caner and I was just getting serious about French island hooch.

So why start with Damoiseau?  The easiest answer is to say “Gotta begin someplace.” More seriously, it’s certainly one of the better known brands from there, the leading producer on Guadeloupe; back in 2016 I remember Josh Miller awarding their white 55% first place in his agricole challenge; years before that, Velier gained confidence to issue more full proof rums by releasing their excellent 1980 version at 60.3% (the first such strong rum in their portfolio); Matt Pietrek suggested the Damoiseau 4 year old Réserve Spécial VSOP was a great rum to have for under US$45 and a good ambassador for the country’s rum-making tradition; and lastly, I simply have good memories of most of their work I’ve tried.  But for me, the VSOP is a bit young and rough, and my affection is given to the very slightly older version which we shall get into without further ado.

Made from cane juice and then aged in ex-bourbon casks, Damoiseau has the occasional peculiarity (in my eyes, at least) of making aged rhums that don’t always or completely showcase the crisp herbal sweet grassiness we have come to associate with agricoles. Here, that isn’t the case at all…up to a point. The cane-juice-derived 5YO, which is near to standard strength (42% ABV) and therefore very approachable by those who want to dip their toes, is remarkably clean and yet still full-bodied for that strength. Immediately there is vanilla, a little oakiness, pears, prunes and the light notes of some pineapple slices.  Also cane sap and sugar water, flavoured with a dusting of cinnamon. And, oddly, a nip of molasses, brown sugar and caramel in the background, which I can’t explain, but find pleasing nevertheless. 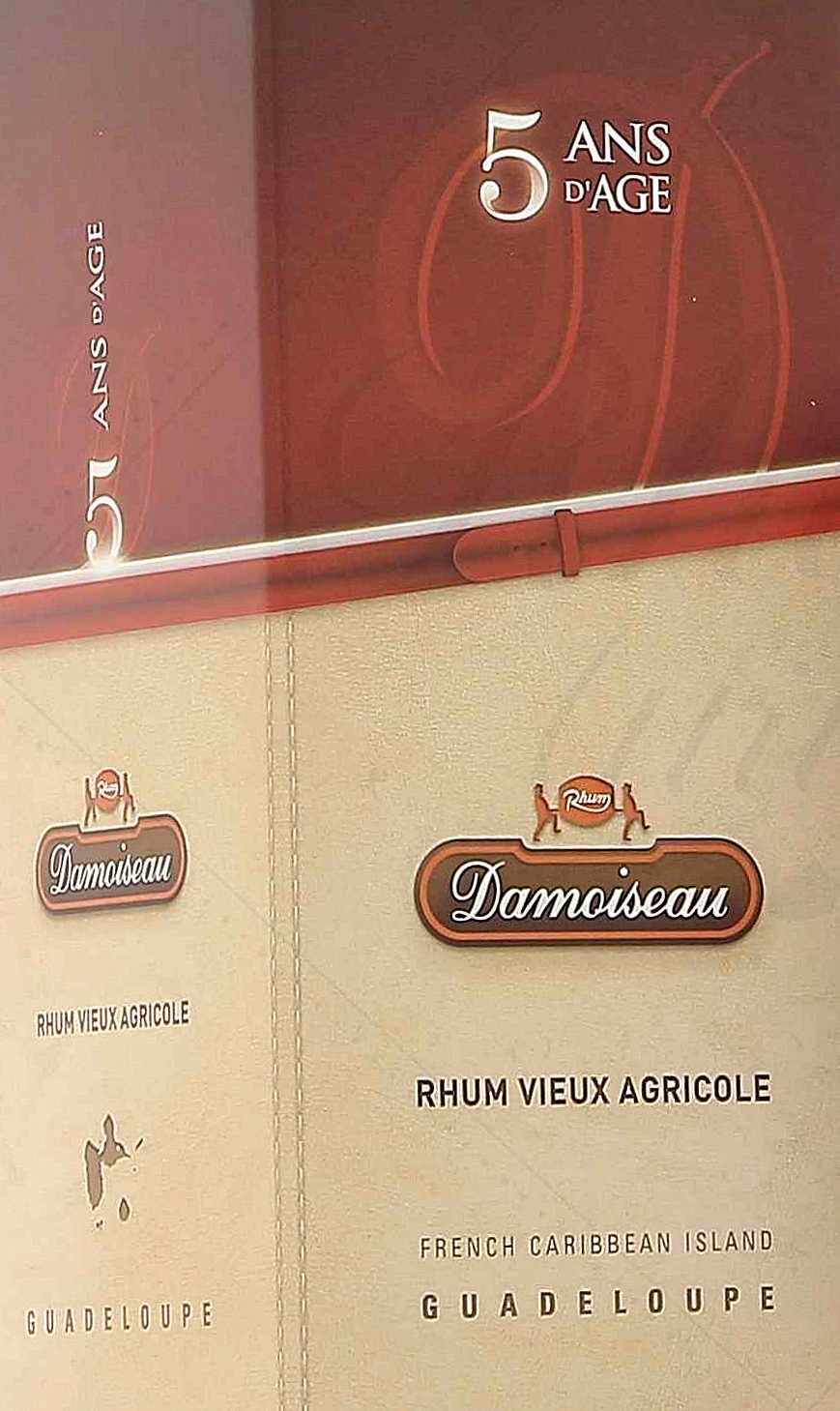 The palate isn’t quite as sterling as the nose, though still a cut above normal: a little thin, perhaps – blame it on the 42%, which is, let’s face it, somewhat lacklustre against the shining vibrancy of the whites, so often torqued up to 50%. The rhum tastes a little dry, a little briny, with vanilla, dates, prunes, blackberries and dark grapes leading in, followed by some florals, crisp oak notes, breakfast spices, cereals…and again, that strange hint of caramel syrup and molasses poured over fresh hot pancakes flitting behind all the other tastes.  It’s a perfectly nice drink for all that, and the finish is a fitting conclusion: nice and long with oily, salty and tequila notes, to which are added light oakiness, vanillins, fruits and florals, nothing specific, nothing overly complex just the entire smorgasbord sailing into a serene conclusion.

Personally, I’d suggest that some extra strength would be useful, but by no means does that disqualify the Damoiseau 5 Year Old as a good all-rounder, equally at home in a mix of some kind or by itself. You can tell it’s been aged, it’s slightly sweet and has the requisite fruits and other flavours combining decently, and the rhum navigates its way between a light and heavy profile quite nicely. That slight touch of caramel or molasses was something I liked as well  — if memory serves, it was a similar ”contaminant” that prevented the 1980 from being released as appellation-compliant and that was why it was sold to Velier, but whether in this instance that’s deliberate or my imagination is anyone’s guess. All I can say is that for me it was there, and it did not detract but enhanced.

So at the end, the 5YO ticks all the boxes we look for in such a rhum. Young as it is, it’s a tasty, unique product from Damoiseau; it’s of reasonable strength — and therefore doesn’t frighten those now moving out of their comfort zones and getting into different styles, with some stratospheric ABV or a profile of off-the-wall lunacy; and best of all for those who just want to nibble at its edges without biting the whole thing, the price point is right on the midpoint between two other candidates for the position. It’s slightly more expensive than the VSOP, but more elegant; and cheaper than the 8 YO but more versatile.  Any of these three could be a rum that celebrates Guadeloupe, but for my money and what I want out of a rhum like this, the 5 YO is the one that nails it.