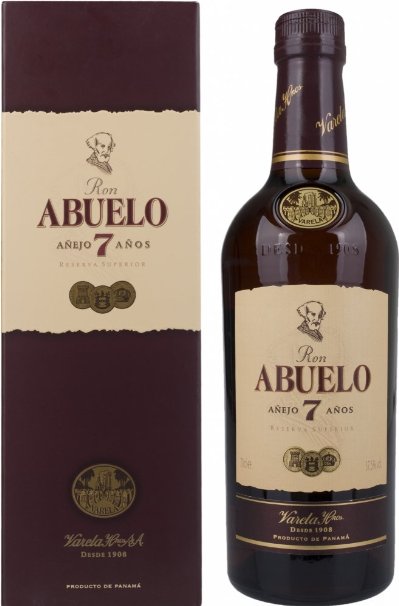 Better than the Ron Abuelo 12 year old, if not quite as smooth.

As a general rule, the older a rum is, the better it’s supposed to be, and price points certainly follow on from that. We pay extra money for the ageing, the loss the maker suffers from the angel’s share, the supposed care and expertise taken in blending and smoothening out all the aged components so as to balance out the oakiness. So you’d think the older the rum, the better, right? Not so in this case. In fact, I reviewed the 12 and the 7 year old rums side by side and had to check my results not twice, but three times – just to make sure it wasn’t a mistake (as you can imagine, during that exercise my computational aptitude went down exponentially, hence the third check to make sure).

Ron Abuelo 7 is the younger, brasher, more insouciant sibling of the top of the line Abuelo 12 year old from Hermanos Valeros about which I wrote very recently. Made from sugar cane syrup (rendered down cane juice) deriving from cane growing right by the Varela Hermanos distillery in Panama, it is distilled in a four-column still and then aged for the duration in ex-bourbon white oak casks prior to final blending – the youngest rum in the final blend is seven years old.

I have no clue why rum producers seem to think that brown, nearly opaque, bottles, are considered a plus – it hides the colour of the spirit within from the casual browser in the shop and gives no basis of comparison even at that admittedly coarse level. Be that as it may, the amber-gold rum – it has the appearance of fresh honey – is embraced by a simple, plastic-capped bottle, no biggie there. Presentation is rock solid without flamboyance of any kind. “I’m a rum,” this thing proclaimed with low key machismo…”nuff said.”

Right off, the nose suggested that I had was something different. Without a real sting to the snoot, the Abuelo 7 revealed scents of chocolate and coffee wallowing in a caramel burnt-sugar bath. Soft, smooth and easy on the inhale, with traces of vanilla, straw and caramel. The aspects of this nose were impressively strong and distinct (not usually the case with middle-aged rums, where one often has to strain to get the slightest hint of aromas so subtle they would make Jean Baptiste Grenouille faint with the effort).

And the arrival was, simply put, excellent. Though not quite as heavy on the tongue as the 12, it’s medium to heavy body was impressive by itself, and it shared the 12’s lack of overall sweetness. However, its smoothness and overall complexity carried me past such concerns regarding sugar: I was tasting caramel, vanilla, some oakiness and a more earthy flavours, and hidden in the back end were muskier hints of leather, of damp ground steaming after a tropical rain and baked fruit enveloped in a kind of smokiness which I found delectable. All this with almost no burn at all: I wouldn’t mix this with anything, and even over ice I might not enjoy it as much. The fade was long, deep and lasting as well, and while here some spiciness started to creep in, it was not unpleasant, but more like the deep heat generated by reddening coals in your fireplace on a cold winter’s night, or exactly the right note of strength and heat you’d want as you watch the sun sink hissing into the ocean in a pleasant tropical twilight, with a glass of this stuff in your hand. What a lovely, lovely rum this was.

Were I to wax metaphorical (again), I’d suggest that what we’re talking about here is character. The difference between various movie actors portraying the same role – and the best example might be James Bond. The Abuelo 12 aspires to be Pierce Brosnan or Roger Moore – exquisitely dressed, urbane, debonair, unflappable, always ready with a quip, with the culture and breeding right there out front on the lapels of the Savile Row suits – but lacking, I dunno, some kind of down to earth machismo. The Abuelo 7 is more like, oh, Connery; or better, Daniel Craig. Brooding, capable, awesomely efficient, dynamic as all get out, yet not as well-bred. I mean, with the Abuelo 7, as with Mr. Craig, you get the elemental brutality and proficiency of a well-educated street-thug. And believe me – I mean that as a real compliment. The Abuelo, on the levels described above – taste, smoothness, complexity and character – makes me hurry to see Casino Royale again, while sticking Goldeneye and Moonraker back on the shelf.