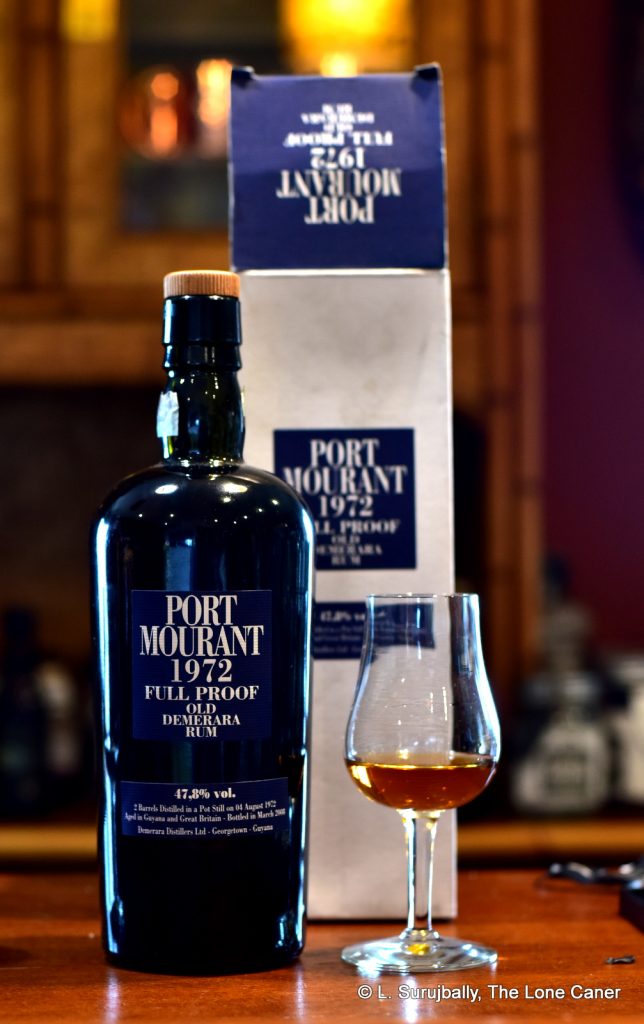 The Velier Port Mourant 1972 is the Demerara rum from further back in time than anything else they’ve ever put out the door, beating out the legendary Skeldon 1973 by a year, and is a stunning 35 year old rum. Given its age and how long ago it came out the door (2008) it would seem to be a better fit for the Rumaniacs series, but I felt it raised two issues that perhaps made a full-fledged review essay more appropriate. Plus, I really liked the damned thing.

Quite aside from my personal admiration for these older Velier rums, what also piqued my interest was that two of my barking mad viking friends rated it as high as they did in their Velier PM blowout some months ago. I was surprised as well: here was a rum bottled on the drowsy side of 50% and not even fully tropically aged, and it scored that well? This seriously enagaged the gears of my curiosity, and in April of 2018 I was able to put it into an eight-rum mashup…just to see what the fuss was all about, and if I could perhaps poke a hole in their assertion that it was that good. This is the sort of cheerful one-upmanship we indulge in, in our spare time, when we aren’t posting pictures of our latest acquisitions. 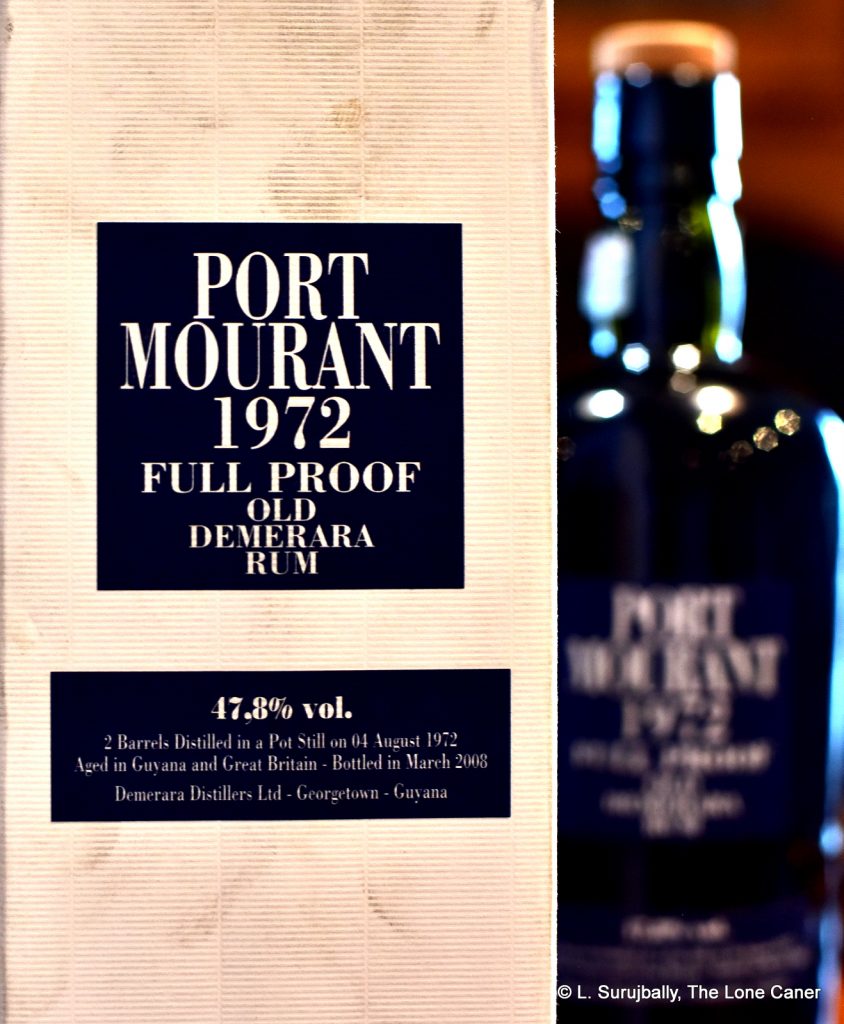 The nose made an immediate and emphatic response: “Here’s how.” I had exasperatedly grumbled “OFFS!” with the El Dorado 1988 25 YO — with the PM 1972 I leaned back, sighed rapturously and said “Oh yeah.” Sweet deep raisins, licorice, soya (very light saltiness, really nicely handled), coffee, bitter chocolate leather and smoke The balance of the components and the way they segued one into the other, and re-emerged just as you thought it was all done, is nothing short of outstanding. And even when I thought the show was over and then went to wash the dishes, do the laundry, kiss the snoring wife and return, there was more waiting – prunes, blackberries, nougat, anise, chocolate-covered dates, molasses, aromatic tobacco and a fine blade of almost imperceptible citrus.

A rather more traditional and solid PM backbone of licorice and molasses was in evidence once the tasting began, acting as a clothes horse upon which were hung other elements of flavour – that chocolate and coffee again, muscovado sugar, white pepper, vanilla…and that was just the beginning. I went out grocery shopping, cleaned the house, made brunch for Mrs and the Little Caner, came back, tasted again, got hit by oak (not much), orange peel, flowers, sawdust, raisins, black grapes, ripe mangoes…I held the bottle up to the light in some perplexity, wondering, where was all this stuff coming from? Even the finish displayed that remarkable richness of profile, and rather than go into detail, I’ll just repeat what I said in the mashup essay: “All of the above…plus some mint”. Because that was exactly it.

The balance and complexity and overall richness of this rum is extraordinary. It is aromatic to a fault, and so generously endowed with tastes and flavours that if they were physical attributes, somewhere John Holmes would be weeping with envy. And all of that is in spite of — or because of — two issues.

For one thing, the PM 1972 is not a particularly strong rum (“firm” might be the best word to describe it). You’d think that at 47.8% it would be a laid back, slow-’n’-easy kind of product, with a lot of complexity but not too many rabbits squirming around in its jock. But somehow it succeeds. It shines. It’s strong enough to make a statement for its quality without wimping out at some low-ass strength that would make it a dilettante’s wet dream but not completely delivering on its promise (like the Cadenhead Demerara 1975 at 40.6%, perhaps) . I’ve made many comments about my evolving preference for cask strength bruisers, yet I cannot fault the low-power engine that drives this thing, because it’s so seamlessly constructed, samples so well.

Secondly, Luca is known for his fierce proselytization on behalf of tropical ageing – his oft-stated opinion, proudly displayed on so many of the rums he slaps Velier’s name on (and which has been adopted by many other producers) is “Fully Aged in the Tropics”. But here that’s not the case: the PM 1972 was partly aged in Guyana, and partly in Europe. To some extent that may be the exception proving the rule, but to my mind what it demonstrates rather more subtly is that we should not be so quick to dismiss continental ageing just because it’s becoming some sort of conventional wisdom. The fact is that other independents like the Compagnie, Rum Nation, Transcontinental, Samaroli, Duncan Taylor, Hunter Laing etc have long shown that continental ageing can work if done right, and perhaps appeal to rum drinkers who like or prefer a different kind of aspect to their aged-rum profiles. The sweet spot of dual ageing as opposed to one place or the other may just be demonstrated – in spades – by this old and almost forgotten rum, of which only 175 bottles ever came to the world from the original two barrels.

But wherever it slept and whatever the proof, somehow the Port Mourant 1972 finds an intersection of strength and ageing to present a profile that is almost without flaw. I went in to the tasting, rather snidely hoping to disprove its purported brilliance. I was unable to do so. Simply stated, the rum is phenomenal. It’s one of the best Guyanese rums at its strength, from any still, at any age, ever made. It hurts that it is so rare and that the new crop of rum drinkers are unlikely to ever try it, because you can bet that anyone who still has one is holding onto it as tight as Mrs. Caner to the dream of a Gucci purse. Given my appreciation and respect for this rum, I have to admit that if a bottle ever landed in my grubby paws, then my grip would be pretty fierce as well.

Sorry, the comment form is closed at this time.