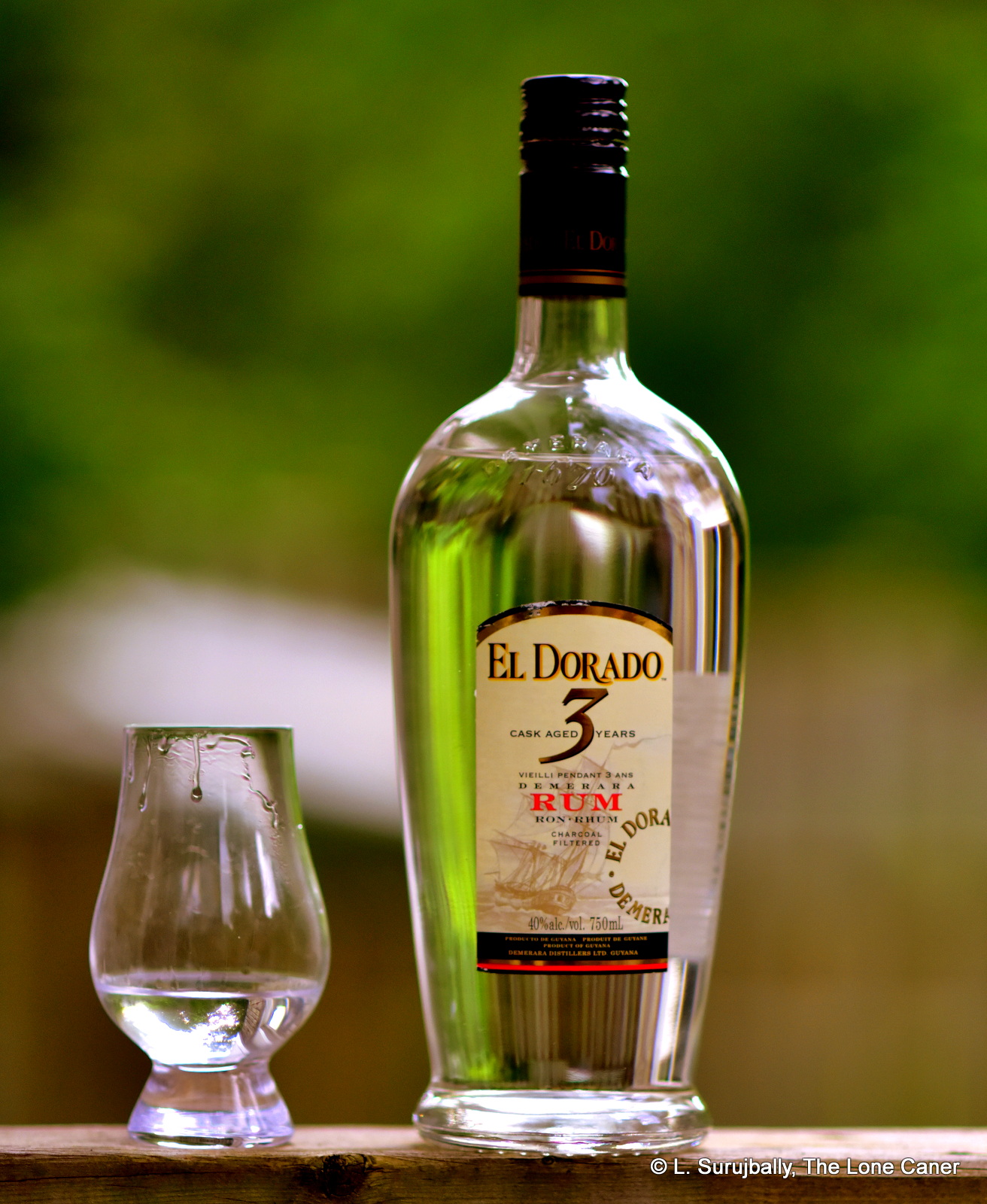 If there was ever a standard strength, filtered white rum that could drag the Bacardi Superior behind the outhouse and whale the tar out of it, this is the one. I bought the thing on a whim, tasted it with some surprise and ended up being quietly impressed with the overall quality. I know it’s made to be the base for cocktails, and when it comes to badass white-rum-bragging-rights from Mudland the local High Wine is the Big Gun – but you know, as either a trial sipping experience, a cocktail ingredient or just to have something different that won’t rip your face off like Neisson L’Espirit 70⁰ … this rum is not bad at all.

Now according to the El Dorado site this rum derives from the Skeldon and Blairmont marques, which suggests the French Savalle still, not any of the wooden ones, or perhaps the same coffey still at Diamond that made the DDL Superior High Wine. Maybe. I sometimes wonder if they themselves remember which stills make which marques, given how often the stills were moved around the estates before being consolidated at Diamond. Never mind though, that’s niggly rum-nerd stuff. Aged three years in ex-bourbon casks, charcoal-filtered twice — which to my mind might have been two times too many — and then bottled at a meek 40%. 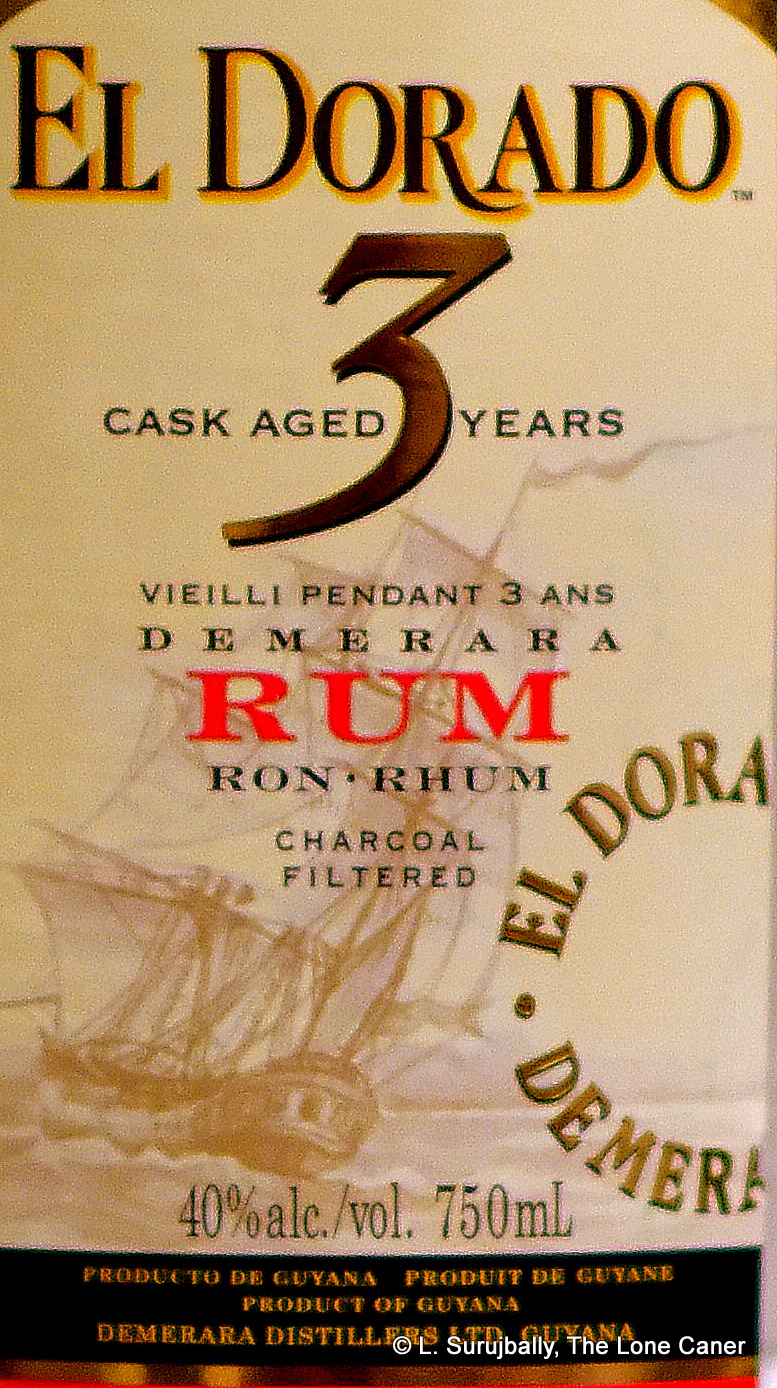 Yeah, 40%. I nearly put the thing back on the shelf just because of that. Just going by comments on FB, there is something of a niche market for well made 45-50% whites which DDL could be colonizing, but it seems that the standard strength rums are their preferred Old Dependables and so they probably don’t want to rock the boat by going higher (yet). I can only shrug, and move on…and it’s a good thing I didn’t ignore the rum, because it presented remarkably well, punching above its weight and dispelling many of my own initial doubts.

Nose first: yes, it certainly reminded me of the High Wine. Glue, acetone and sugar water led off, plus some rubber, brine and light fruits. Even at the placid strength it had, you could sense potential coiling around in the background, a maelstrom of apples, pears, vanilla, light smoke and unsweetened yoghurt, plus tarter, more acidic notes of orange peel, mangoes and a twirl of licorice. None of these was forceful enough to really provide a smack in the face or to elevate it to something amazing or original; they were just visible enough to be noticed and appreciated without actually emerging to do battle. It smelled something like a low-rent Enmore, actually and kind of resembled El Dorado’s own 12 year old

Tastewise, there was certainly nothing to complain about. It was reasonably hot, a little rough on the tongue, given to sharpness rather than smoothness. Vanilla, apples, green grapes, bitter chocolate, some indeterminate light fruits, sugar water, coconut shavings; and also a not-entirely-pleasant taste of almond milk, with the whole drink possessing the edge that made it more than a merely pleasant or bland or eager-to-please cocktail ingredient of no particular distinction. The finish, redolent of vanilla, brine, citrus and yoghurt, was actually quite good, by the way – short, of course, and faint, but nice and warm and with just enough edge to make it stand apart from similar whites.

Where the El Dorado white 3 year old succeeds, I think, is in having a certain element of character, for all its youth. That was always the problem I had with the low end Bacardis or Lambs or other boring white stuff on sale in the LCBOs of Ontario (for example), with which this must inevitably be compared: they all felt so tamed and buttoned down and eager to please, that any adventurousness and uniqueness of profile — braggadoccio if you will — seemed squeezed out in an effort to appeal (and sell) to as many as possible. They had alcohol and a light taste, and that was it: bluntly speaking, they were yawn-throughs — and mixing them to juice up a cocktail was the best one could hope for.

Not here. This rum has some uncouth street-tough edge, plus a bit of complexity from the ageing, and originality from the still which is lightly planed down by the filtration…yet retains the taste of something strange and barbaric. And it still doesn’t scare off those who don’t want a cask strength screaming bastard like, oh, a clairin. For any rum made at 40% to be able to tick all these boxes and come out the other end as a rum I could reasonably recommend, is quite an achievement, and makes me want to re-evaluate its stronger older brother immediately.