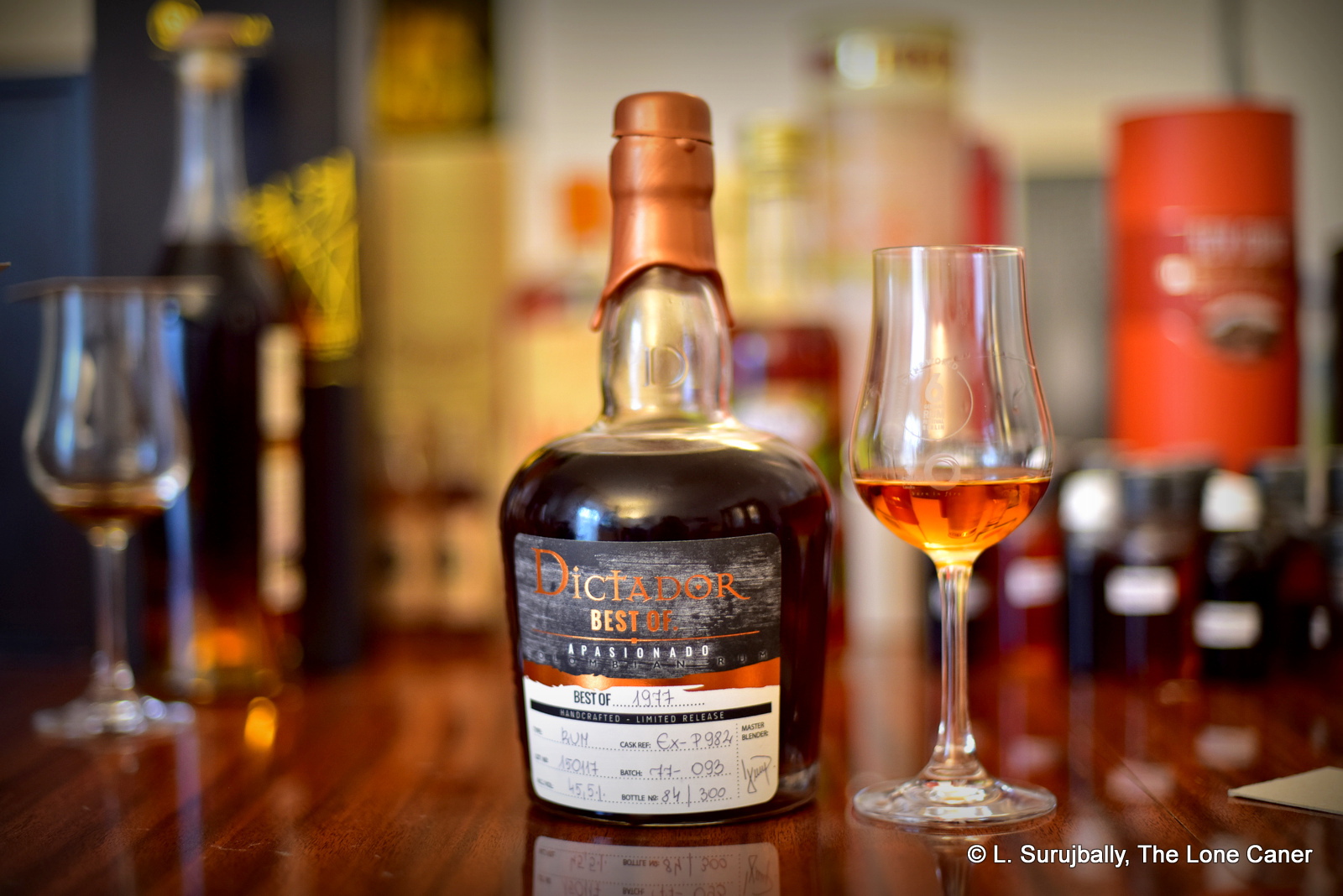 “Sample #18 reminds me of a Don Papa,” grumbled a Philippine friend of mine, who was blind tasting some samples I had sent over to Quezon City. “Hot distillate on the nose, very sweet.” In those few words he encapsulated something of my own unease about the Dictador rums out of Colombia, because while hydrometer tests reveal no adulteration for the 12 and 20 year soleras, and probably none for the Insolent and Perpetual (they measure 3-4 g/L which is within the margin of error), the plain fact is that they simply taste too damned sweet…a characteristic of most solera-style rums I’ve tried. Which would lead any cynical rumhound, in these sad and suspicious times, to posit that maybe they understated the actual ABV so that a hydrometer test would register exactly what the label says.

Given that the zero-additives-registered 12 and 20 somewhat predated the current sugar imbroglio, one could make the case they’re not pulling a fast one, but the question refuses to go away — because when Cyril tried the “Best of 1978” version it came out as 17 g/L and even if this were not the case, when you try this rum from a year earlier, you cannot help but feel that there’s more in its trouser pockets than a pair of hands. That does not make it entirely bad, and since many have said nice things about it, perhaps it’s merely one you should be wary about buying if your personal palate does not run to the lighter, sweeter Spanish style of rums in general, or soleras in particular. And if you want to know exactly what you’re buying, well, that’s a matter for my opinions down below this review. 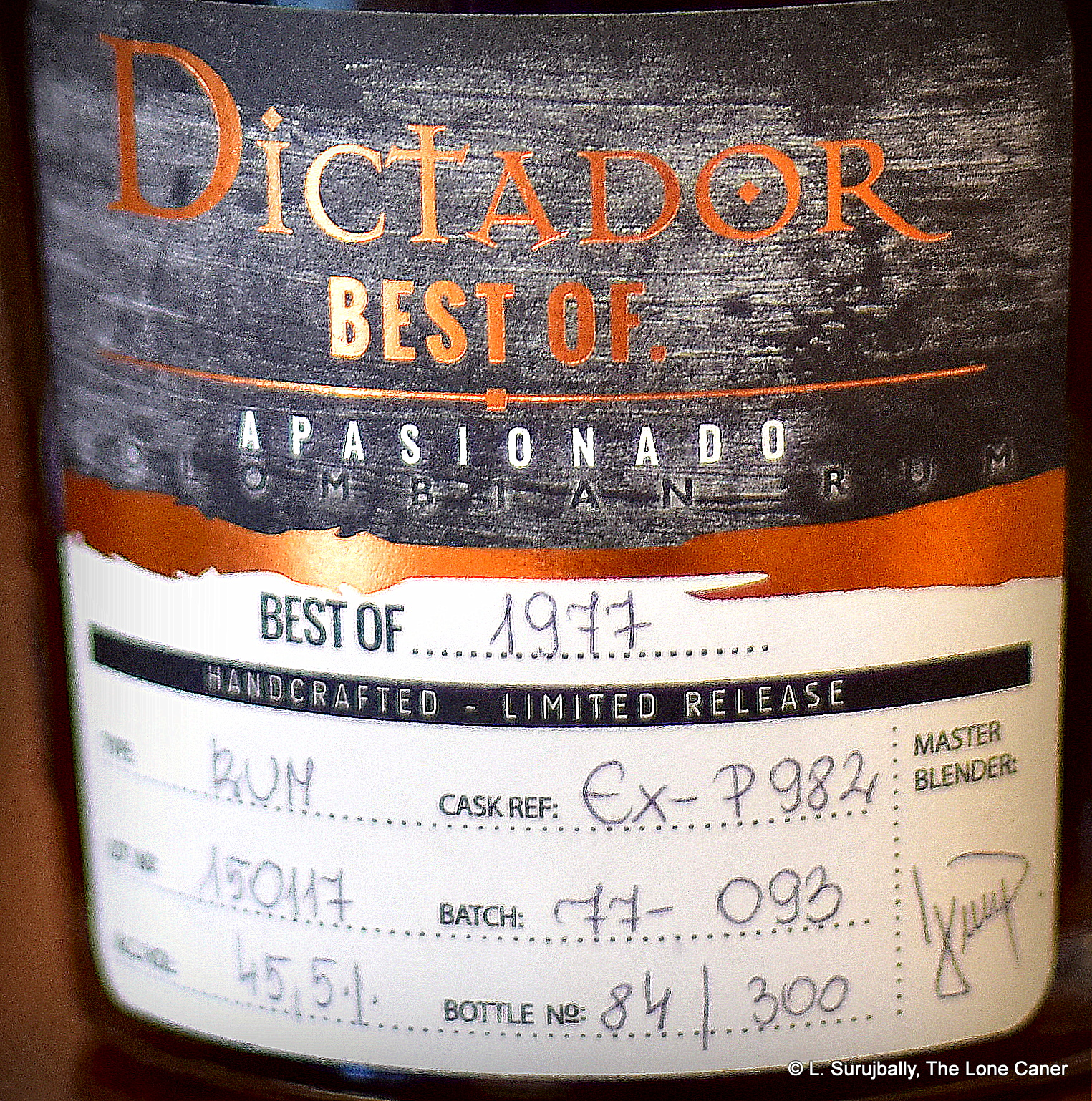 Anyway, tasting notes: all those who have tried the various Dictador expressions have remarked on the coffee undertones: that remained strong here as well – it’s something of a Dictador signature. It was soft and rounded, exhibiting gentle, creamy notes of sweet blancmange, bon bons and caramel. There was something of a red wine background here, raisins, and a vague fruitiness that was maddeningly elusive because it never quite emerged and came to the fore with any kind of authority. The nose therefore came through as something of a sleeping beauty behind a frosted glass case – I could sense some potential, but was never quite able to get the kiss of life from it…the liqueur note to the smells, while not as overpowering as on the 20, kept getting in the way.

Things were slightly more impressive to taste, because here the strength of 45.5% worked better, and it presented as a little edgy, a little jagged, if lacking that smooth purring of velvet which we might have expected (and the ease of which were other defining characteristics of the 12 or the 20 along with that over-sweetened coffee which wouldn’t go away) – this, to the 1977’s credit, added some character: chocolate, coffee (again), cumin, a light lemony flirt of coriander, ginger, even sweet red paprika: but the core of it all remains the caramel-coffee. Ultimately, however, it remained relatively uncomplex, fragile…even weak — the flavours were somewhat unassertive, flat, jittered around too much and fell away too quickly. My personal opinion was that it lacked punch and staying power, which was most to be remarked on the finish which was a quick burst of caramel, coffee, chocolate and oaken heat mixed up with some black tea….and then it was gone. Poof. 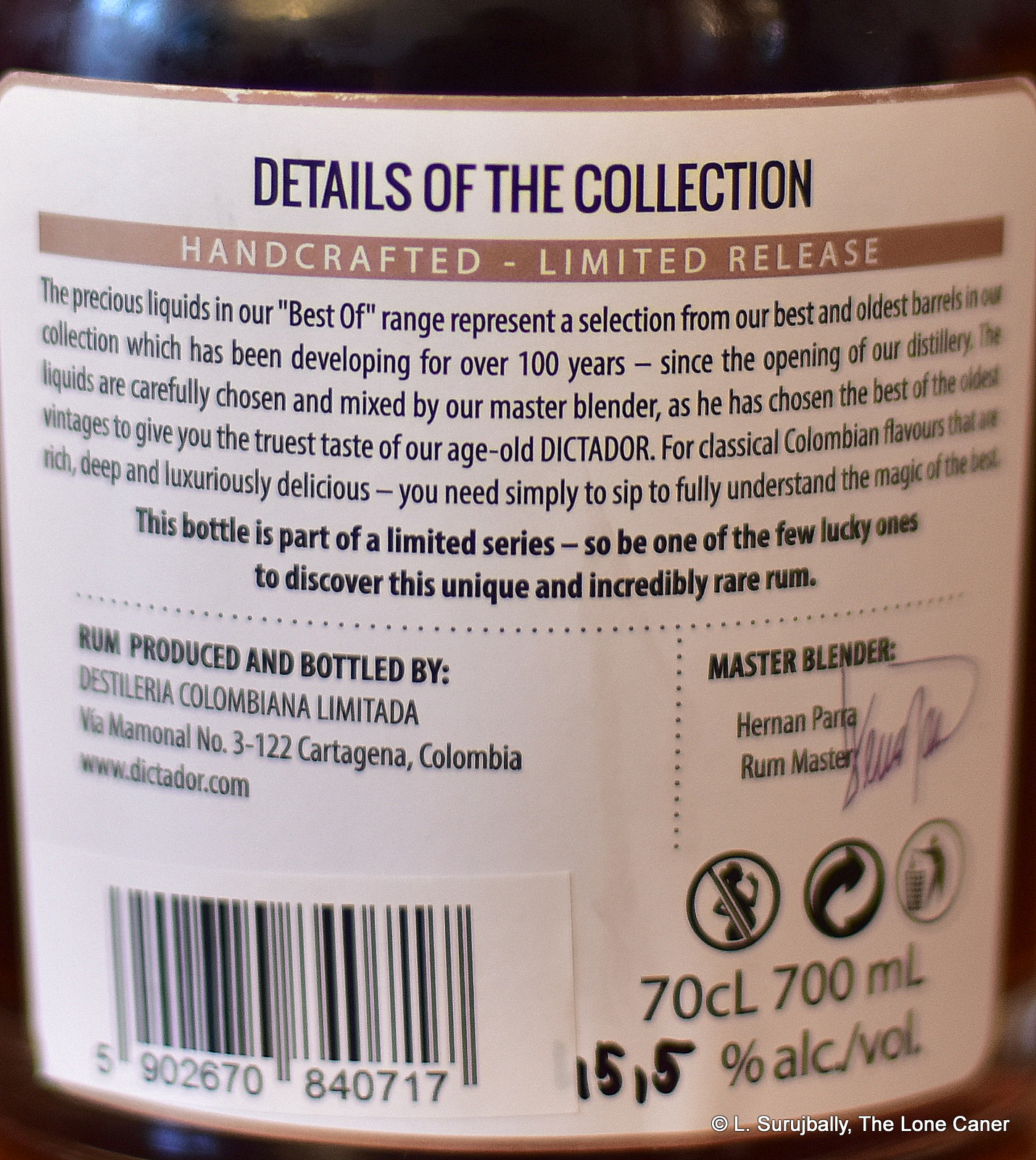 Now that’s not to say we’re sure, when all is said and done, the nose nosed, the palate palated and the finish finished, that we’re entirely clear what we had. Certainly it was some of something, but was it much of anything? I’m going to have to piss off some people (including maybe even my compadre in the Philippines) by suggesting that yes, I think it was…better, at least, than the preceding remarks might imply, or than I had expected going in. For one thing, while it was sweet, it was not excessively so (at least compared to the real dentist’s wet dreams such as Don Papa 7, or the A.H. Riise). It had reasonably nice tastes and smells, so as a dessert rum or smooth, sweet sipping experience, this will do the job. It delivers for all those who like that profile — and from what I am led to understand by many correspondents of mine, this is the style that is preferred in South and Central America, and the Spanish Caribbean, hence its enduring popularity.

So here’s what I’ll do. If you like this kind of thing, add five points to my score. If you detest soleras, sweeter rums or underpowered blended drinks, subtract five. Either way, you’ll probably come out with the perfect number to represent your own feelings on the matter. Me, I rate it as a middling decent rum which needs less sweet, less coffee, more disclosure, more complexity…and the courage to stop with the solera moniker, call it a blend, age it for the full monty, and for sure add quite a bit of extra oomph. Then I might buy not just a bottle, but a case.

The “Best of 1977” sounds real good, but is ultimately useless as any kind of standard by which to measure it since no additional information is given as to how old it is, even in solera terms. I wish I could tell you it’s 1977-2016 or 1950-1977 or something, but there’s simply nothing to go on here. Dictador do themselves no favours in this matter by consistently naming their various rums as “Aged 12 years” or “Aged 20 years” (with “solera” in much smaller typeface on the label), when of course they are nothing of the kind by commonly accepted parlance – the oldest rum in the blend is that old not the youngest, there is no mention of how much of that age is included, and even the average age is a matter of conjecture. It may be legal, but it is somewhat deceptive too. The same issue afflicts the entire “Best of…” series and dilutes their effectiveness in all the ways that matter to those who want to know what they’re buying. Because we really don’t know, and can’t tell.

Quite aside from ageing (or lack thereof) consider the the whole question of tasted-but-untested additives. The “Best of…” series are an informational sinkhole of gargantuan proportions, an exercise in enormous frustration. Henrik Kristoffersen nailed it in November 2017 on the Global Rum Club forum where he asked where this stuff came from and were they really sitting on barrels from as far back as 1966 for this long? Others chipped in asking how ageing any barrels that long could possibly leave anything behind after the angels took their bite of the pizza. Still others noted the same barrel reference on both the Best of 1981 and the Best of 1966 bottle labels. Then there were the discussions on whether anything was actually distilled by Dictador or whether they (like Hechicera, also from Colombia) sourced distillate from around the continent. And then there was Cyril’s take-no-prisoners French-language article on Dictador as a whole, which did not leave either the company or their big gun looking too good.

If this isn’t a poster child for the application of The Rum Chum’s First Law (“Drink what you like…know what you drink”) I don’t know what is. It sips well if you like that profile, but God help you if you want to find out what it’s made of, how old it is, or where it comes from. And before you think that I’m being unreasonably snarky, note that a discussion like this is not a mere academic rum geek pastime – knowing what you’re looking at allows you to rate and assess its price in your local shop (the 1977 edition goes for north of $200, and the 1966, labelled as “51 years,” is closing in on €500). If you can’t find out whether the damned thing is five years old or fifty, whether it’s pot or column, solera or true-aged, added-to or clean…then the producer has betrayed his trust with you; and you’re within your rights to not only demand more, but to ask the hard questions of anyone who is trying to regurgitate a bunch of marketing folderol without actually saying much of anything. For sure we’re not getting the whole story here and since we don’t know what we’re buying, I’d suggest you leave this review and opinion, with me having spent my coin so you don’t have to spend yours.

(Closing note: this Opinion dovetails with my other commentaries on the matter of trust, detailed in or as opinions below, the reviews of the Malecon 79, Mombacho 19 and the Don Papa Rare Cask).