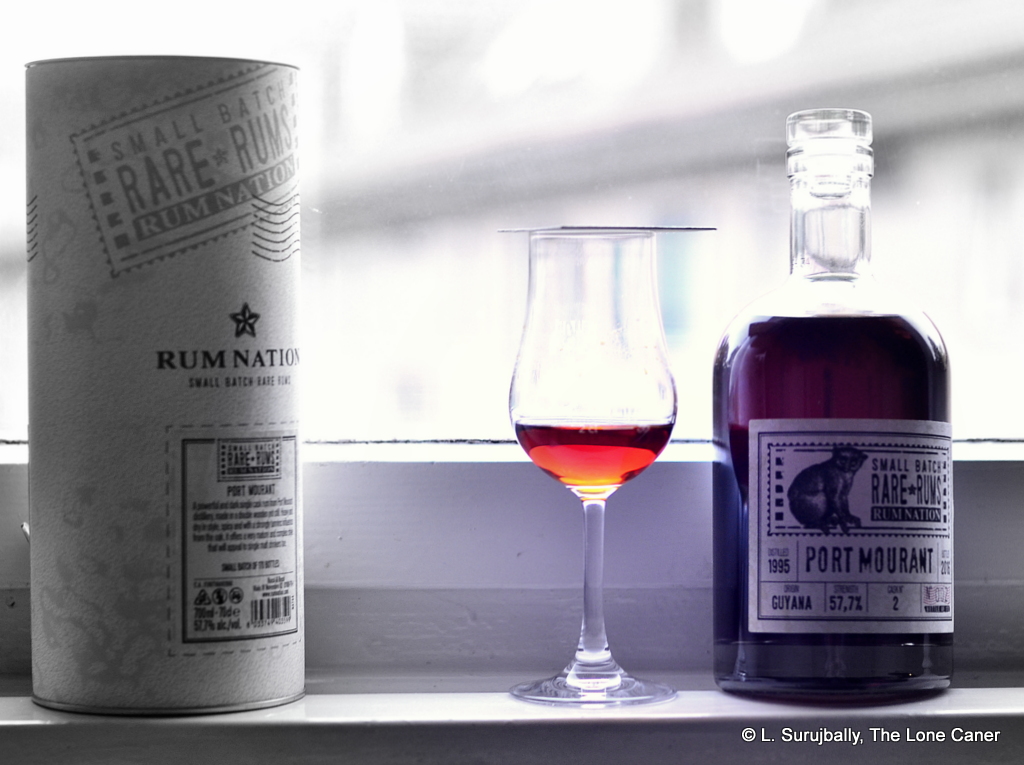 A grand old PM. Best of the three Small Batch selections from 2016.

It’s reasonable to wonder whether there isn’t some self-cannibalization going on here. Since their inception back in 1999, Rum Nation’s flagship products were always the old-enough-to-vote Jamaicans and Demeraras, all issued at around 43-45%. The old wooden box and jute packing gave way to sleeker, modernist boxes, but the ethos remained the same, and happily for the aficionados, there were always several thousand of these floating around, as Fabio Rossi never bottled just one cask, but several. (As an aside, something of the evolution of our world can be found in how long it took for anyone to even notice the original selections from the 1970s, which took years to sell…a situation which simply cannot occur today).

Fast forward to 2016, and the company sprang this surprise on us – in the same year that DDL pushed out its Rare Collection, RN raided its slumbering cask stash to produce three limited edition Demerara rums of their own, called the “Small Batch Rare Rums” (and I hear — in the muttered corners of the smoking area out back where the rum-hoodlums hang around — that others from Reunion and Hampden may be in the works). Yet, because of their more limited outturn, these rums may be cutting into the sales of, or appreciation for, the top end rums that have won so much acclaim over the past decade or two, since what is made into a Small Batch cask-strength rum won’t be made into a twenty-something year old in the Supreme Lord or Demerara series.

Well, whatever. We’re lucky to get these rums at all, I sometimes think. And this one is right up there with the 45% Demeraras of made with such care in Rum Nation’s youth, perhaps even a smidgen better because of the extra oomph that was generously ladled out for us.

As usual, let’s get the known facts out of the way: Port Mourant distillate from the double wooden pot still in Guyana; the single cask was bought via a broker, and aged in Europe, first in the Bristol Spirits warehouse and in Italy after 2007. The ageing was done from 1995 to 2005 in ex-bourbon barrels and transferred into a second-fill sherry cask in 2005 until final release in 2016 (Fabio told me he didn’t know whether it was first or second fill, but my own feeling after the tasting was that the sherry had an effect on the final product that was not strong enough after so many years to justify the first fill possibility, but that’s just my opinion). The outturn was 170 bottles, bottled at that so-very-lekker strength of 57.7%, and I have bottle #002, which is almost as cool as having bottle #001.

Was it any good? Oh yes. Just opening it up and smelling straight out of the bottle hinted at olfactory impressions to come – some rubber, wax and floor polish, which swiftly dissipated, followed by licorice, bags of raisins and dried fruit, prunes, dates, cedar wood shavings, and a lovely aromatic tobacco and lemon peel smell behind all of those. There were some well integrated caramel and vanilla notes, a sniff or two of red wine, but in the main, as was to be expected, it was the trio of anise, raisins and wood that were the core of the nose. It showcased all the markers of traditional excellence that I have always enjoyed about the Port Mourant distillate, all in balance and as harmonious as a zen garden.

57.7% was also an almost perfect strength for it to be issued: over 60% it might have been too raw, under 50% and maybe too easy. Not that it really mattered, because between the ageing and the sherry influence, the rum demonstrated a powerful but restrained mouthfeel which gave you the heat and the strength without ripping any part of your corpus to shreds. Sharp it was not…forceful might be a better appellation. And then the flavours came through, big and bold: licorice, oak, more of those aromatic cedar and cigarillos acting as the central core, upon which were hung the lesser tastes like apricots, more lemon peel, grapes, brown sugar, red wine and strong black tea, leading up to a masterful finish that lays it all out on the table so your senses get one last whiff before it all gradually dissipated.

The balance of the rum is exceptional – many of the elements are so flawlessly constructed and built into the profile that you want them simply continue, yet they create a sort of emotional, labial vortex drawing you into another sip, another glass…maybe that’s why half my bottle is already gone. What it really is, is a delivery system for ensuring you get every bit of nuance that can be squeezed out of a barrel. I felt that way about Rum Nation’s Jamaican Supreme Lord series, and the 57% white, and yes, about the Demeraras. To make a series like that, of such consistent quality is something of a minor miracle. To crank up the volts and issue a small batch version of the PM alone and have it be this good is surely another.

So, if you like Guyanese rums as a whole, cask strength rums generally and Port Mourant rums in particular, well, you really can’t go wrong here. It’s ambitious, luscious, and delicious, providing a rum profile where drinker engagement and enjoyment is 100%. As for the quotient of appreciation? My friends, that may actually be off the chart.

This rum is the first release. The 2nd Release, also from 2016, is a 17 year old bottled at 57.4% from two casks resulting in 816 bottles. I tried that one at the 2016 Berlin Rumfest and can confirm it’s also quite good (though I liked this one more).