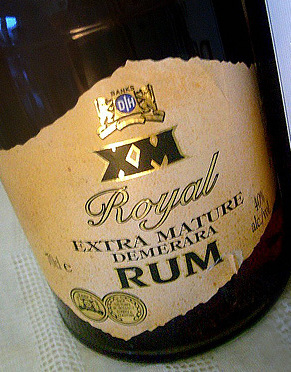 Something that puzzles, annoys and confuses me about Toronto is the paucity of rum selections in the LCBO. I thought this was just a Calgary thing, but it seems that there are more varieties of rums available in cowtown than in a metropolitan area that has several hundred thousand West Indians in the population. Can you blame me for the head scratching and being grateful for deregulation in Alberta?

Fortunately my old schoolfriend Pratima, who also hails from Guyana, had two rums in her cabinet gathering dust (and I mean that literally); I had been after these for a long time as they are tough to get in my area, and she very happily trotted them out for me to sample, probably so that she could giggle at how I swirled, sniffed and tasted. I laughed too, but drank ‘em anyway…it’s fun doing this in the company of an old friend.

D’Aguiar’s Extra Mature rum was in a plastic bottle with a tinfoil cap, which was surprising (and did less than enthuse me abut Banks’s product line here); it’s definitely a Demerara rum, although not made by DDL (and as of the 2010s can no longer call itself a Demerara rum, as DDL has dibs on that descriptor). It’s darker than the norm, but still lighter than DDL’s el Dorado offerings: a clear dark gold. In the glass it displays a good viscocity and thick sheen sliding slowly down the sides of the glass. On the nose it is pleasantly deep and rich, and redolent of molasses – much more so than the 10 year old which I’ll address in a separate review – but with a bit of spirit smackdown as well…not too much, though. The caramel, vanilla and toffee hints come through quite clearly; the rum overall is slightly dry, and just sweet enough…and coiling around the backend, you get a faint whiff of fruit – citrus, a little banana. The finish is not very smooth, and medium long on the first go – as you get used to it, it subsides somewhat and evens out.

The Xtra Mature is blended from Demerara rum supplied to Banks DIH by Demerara Distillers up at Diamond Estate (note – by 2017 this had ceased and Banks sources distillate from Trinidad and Barbados), and I gotta tell you, the more I find out about DDLs operations – the supplying of rums to other companies, their international scope, their excellent premium rums which they can almost be said to have pioneered – the more impressed I am. This XM product is a challenge to review because so little has been written about what constitutes it. That it is a rum, and a decent one, is without question: but how long the blends are aged and whether any post-finishing touches (again, like the 10 yr old) are added is not something I can ascertain from either Banks’s website or any other writers. My personal take is that this Xtra Mature is a step above the 5 yr old but not as good or complex as the 10 year.

I’d also have to say that it is not a sipper: it has just a bit too much bite in it for me. I don’t think Banks actually markets it as a sipping premium rum either, since that moniker appears to apply to the Royal Gold Extra Mature, the 10 yr old or the VXO 7 yr old. But both Pratima and I agreed (when she ceased her laughing) it was good, nay, excellent, as a mixer. Since I’ve never seen it for sale in Canada, and it lacks the international cachet of the El Dorados, I can’t speak to the public awareness, or the price: but whoever gets a Mudlander to bring this or the ten year up from the Old Country for them, is in for a treat without question.