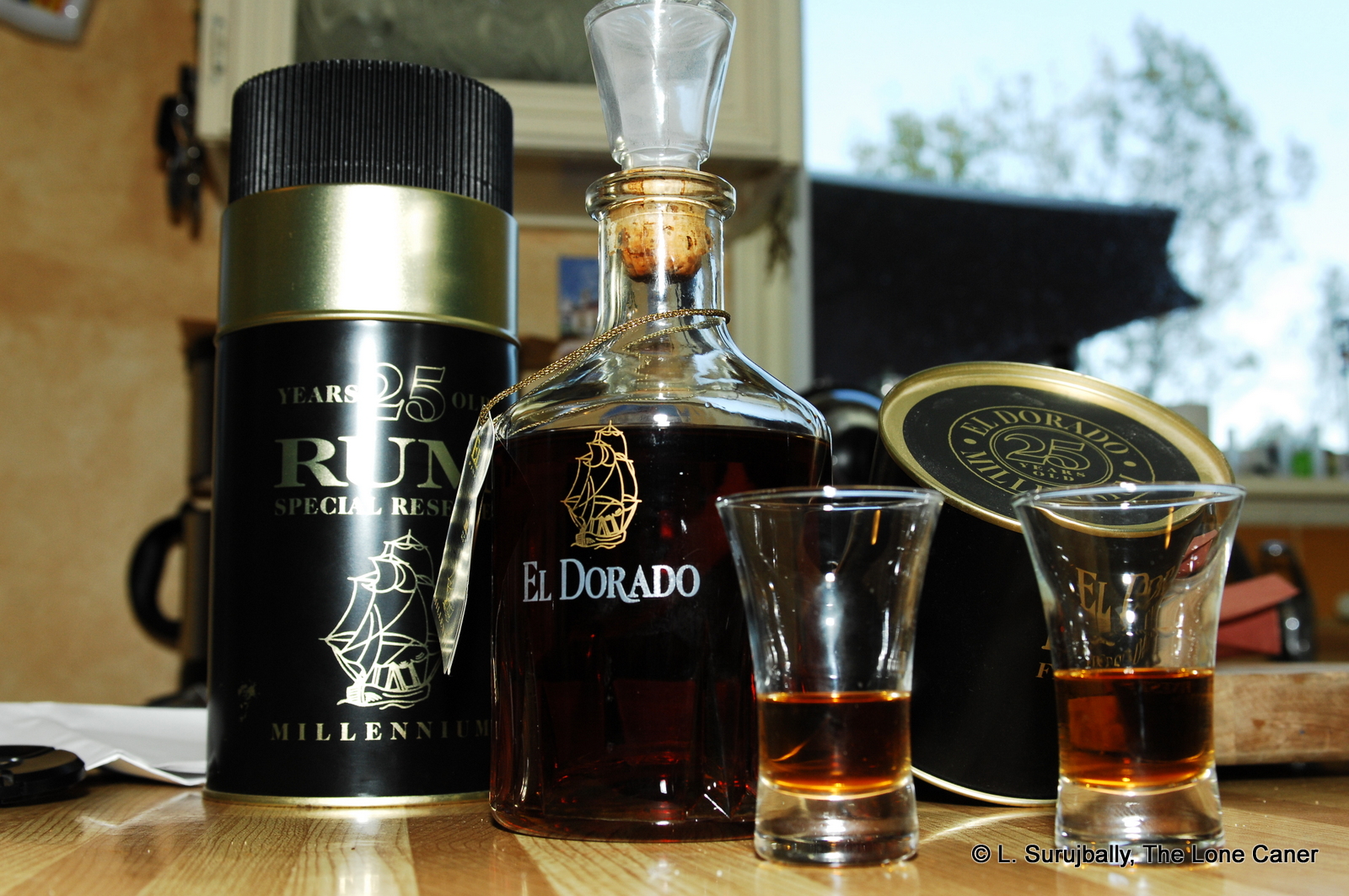 Note: I have written a companion piece to this review for RumConnection here: it’s more tightly researched, a bit longer, and takes a more structured approach.  But both this review and that one are of a piece, and I hope you enjoy them

Of all the rums reviewed here, I believe that the only reasonably complete “age set” of a single distillery’s products I’ve managed to buy is the el Dorado line. Somehow, Calgary seemed to have gotten most of the el Dorado aged rums over time, though some of the estate editions are missing – and I’ve snagged everything I ever saw up for sale…except for the ne plus ultra, their fabled 25.

Now the El Dorado 21 costs ~$100, the English Harbour 25 goes for $200, Mount Gay 1703 $110 and Clement XO $126 (with the Appleton 30 at a whopping $300+ in Calgary, and $550 in Toronto)…the El Dorado 25 supposedly retails for a cool $350, but only when you can find it, and that’s about as likely as finding seriousness in a Rajinikanth movie.  So it’s a little like a Grail of sorts for me, and when an old friend in Toronto mentioned he had a bottle of the Millenium Edition  (bottled for the year 2000), and was prepared to let me have a sip under carefully controlled circumstances (lock, key, watchful guards and closed circuit cameras not excluded), well, what can a man do but accede and hustle his behind over there.

The various reviews I’ve done of the El Dorado line give more than enough history of the producing company without me adding substantially to it, but in brief, more than any one company in the world, DDL ushered in the age of premium sipping rums way back in 1992 when the El Dorado aged vintages emerged, led by the flagship 15 year old Special Reserve (which my father told me quite frankly is his favourite of them all). To a great extent this was aided by the tremendous variety of original and modern distilling equipment DDL had (and has), including original wooden stills dating back to the 18th and 19th centuries; these permit a variety of dark matured rums that form the backbone of the range.

The ED-25 shares, with a few others, the humorous cachet of being old enough to have intimate relations with itself, and to call the bottle it comes in merely “a bottle” is to do it a disservice.  Like the Angostura 1919 and the Appleton 30, it comes in a container best referred to as a decanter, or maybe a flagon (minus the handle).  It may lack the zen-like Spartan simplicity of the EH10, but it’s arresting for all that and the glass-topped cork makes its own statement of quality (I particularly liked the voluptuous popping sound when eased out). You feel, when opening this baby, that you should be on a plantation house somewhere, watching the sun go down over emerald green cane fields moving and rustling in the trade winds.

Right away you are enveloped by warm breathy fumes of your favourite bedtime partner gently blowing brown sugar at you. The nose is not sharp enough to sting, but asserts its prescence in a sort of mild burn that is far from unpleasant and hints of caramel, brown sugar, faint orange peel, spices and perhaps (and I’m reaching here) cinnamon. Slow, fat legs swirl in your glass as it drains in an oily film down the sides.  I had observed before that I loved the viscosity of the 21 year old…this one looks to do it one better.

And it does.  “Oiliness” is a mark of how well the rum coats your tongue and allows the tastes to remain there.  The ED25 is a step ahead of the 21 year old I so admired, perhaps a shade more viscous, a bit thicker in the mouth.  It gives the liquid a richness and feel that I find amazing.  It’s still a spirit of 40% ABV, but dense enough for you to almost feel you’re getting a liqueur. The taste that comes through is of smoke and oak, sweetness (a shade more than the 21) and caramel, molasses, nuts, fresh coconut shavings still damp from the blade, bananas, cherries and a slight hint of licorice; and the sense, never quite solidified, of wet warm ground softly steaming after a tropical drizzle. And there was that wine-like taste of cigarillos soaked in port which I used to love in my smoking days.

The dark brown rum is smoother than any rum has a right to be, and to taint it with any kind of mixer would be sacrilege.  I had it neat and then with ice, but my take would be to just have it neat and sip it one small mouthful at a time.  The finish is long and lasting, and like a playful tabby, it bats you with half-sheathed claws right at the end just to let you know you can’t take it for granted…what a wonderful rum this was, indeed.

I suggested in my review of another uber-rum (the Appleton 30) that I can titivate around with opinions on the low and midrange rums without losing any kind of credibility, but just because a man pays a lot for a bottle of the good stuff does not immediately guarantee  a positive, let alone a sterling, review.  That I paid not a red cent except fuel costs to get to John’s house does not invalidate this sentiment.  Was it as good as I had been led to believe?

In answering this question, I want to stay away from making any kind of unequivocal statement as “this is the best” or, “it’s the epitome of rum” or any such superlative, because at end, what you are getting here is an opinion. Mine, to be exact, and as readers of my writing will have discerned by now, I like smooth sippers of some sweetness, complex flavours and subtle underpinnings, with a good mouthfeel and long finishes.  On that level, the El Dorado 25 is one of the best commercially available 40% rums ever made: in my opinion it’s a top five pick for sure (and note how carefully I phrased that). Where it fails slightly, is in the sweetness component.  It’s just a bit too much, the burnt sugar and caramel flavours being a bit too aggressive: they just edge out the subtler tastes coiling beneath, and while the upside is that this smoothens things out a bit on the finish, masks the smoky oak tannins enough for it not to be a whisky (a problem I had with Appletons), it prevents that coming together of all elements — flavor profile, texture and finish — that would give it the premium many will feel a rum like this deserves, and justify the price tag.

That this is the top end of rums is not in question, and so, at the end, whether you buy it or not depends a lot on how you see rums yourself. Are you prepared to shell out over three hundred dollars for a world class sipper, or are you at that stage where you would prefer to go a rung lower and buy two or three also-premium, almost-as-good rums for that same price and triple your enjoyment? In my youth, I knew exactly where I stood on that sentiment; at my current age, with a little bit of cash socked away to indulge myself (and an understanding spouse who pretends not to notice), I’d have to concede that I’d walk – nay, run — to Willow Park to buy this, if they ever stocked it.

Update February 2017 – I had the good fortune to re-taste this as part of the Rumaniacs lineup, and  the intervening years made one hell of a difference: it was staggering how my own tastes had changed.  Not only was 40% way too weak (the rum retails at 43% in Europe), but the sweet was now something that could only be described as an epic fail.  I believe that for its time (~2005-2011) it was right and commanded the heights; few other makers could produce a 25 year old rum in any real quantity to compete with this.  But as full proofs became the preferred strength, and lack of adulteration was the signature of top end rum; and as other, sometimes older rums came on the market, DDL never really changed with the times.  To be sure there will always be those to whom this rum appeals.  These days, I’m no longer one of them, until DDL dials down the sugar and issues the rum at a higher proof.