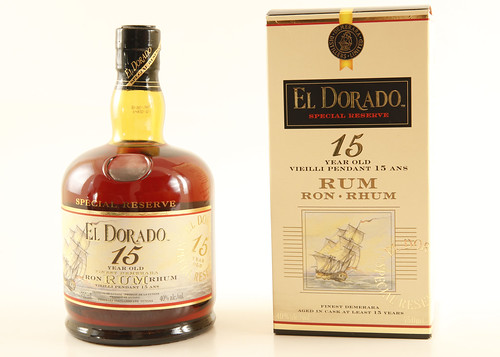 The 15 year old is the bridge. It is the last bottle in DDL’s premium line that will not set you back three figures, and still has the cheery character of a younger rum, the cheeky palate that dances and laughs across your tongue and then happily bitch slaps you for your trouble with all the insouciance of the first girl who ever refused you a dance. In it you see the developing hints of the mastery first seen in the 12 year old that culminates the 21 year old.

Demerara Distillers Limited is one of the largest and quite possibly the most professionally run international enterprise headquartered in Guyana. It’s main competitor in the liquor trade, Banks DIH, is a blender of the XM rum line, and producer of other spirits, beers and soft drinks (and of the marvellously named bottled water “Tropical Mist”), but for my money, when it comes to premium hooch, it’s DDL, and that enterprise stands alone.

The El Dorado series is DDL’s premium export line (as opposed to the decidedly mediocre local crap, the King of Diamonds or Russian Bear which people my age cut their teeth on, which even locals avoid(ed) if they can get the XM-5), and readers of my reviews, knowing my preferences, should not be surprised at how much affection I hold for El Dorados. Part of that comes from the complexity of the blend, coming as it does from fifteen to twenty five year old rums originating in the Enmore and Diamond Coffey stills, the Port Mourant double wooden pot still, and the Versailles single wooden pot still, all blended and aged in old bourbon oak casks. The quality shows.

On the tongue, the rum is a sort of intense marriage of deep flavours. Dark chocolate (unsweetened, dried fruit, licorice, a flirt of anise start you off. You can taste the oak imparted by the barrels the components of the blend were aged in, but amazingly, they never overtake the whole blend. Note also that DDL, almost alone among premium rum makers, follows the whisky rule of stating the age of the rum as the age of the youngest part of the blend. You can separate out well balanced hints of caramel, molasses, burnt sugar, wound around with the faintest hint of cinnamon and vanilla, and the barest trace of orange peel. There is just enough sweet for me to appreciate depth and body, and just little enough to pronounce its age. In fairness, it’s a phenomenally well-balanced drink over all – it can go well neat, on ice or even as a mixer (I do not recommend it as a cocktail, mind you, since it requires no adornment or enhancing).

The finish is an excellent deep burn, not really painful per se, more like a heated liquid – tea! – slowly carving its way down, and it’s excellently long. Yes it does have a bit of sting to it (like the playful smack I mentioned above), but it’s not malicious in a way I often have complained about in the Appletons or the French agricoles…more like a friendly backslap to say “Later dude,” from a friend who doesn’t know his strength.

I don’t give numerical ratings as a general rule, because I want my explanation to speak for my experience, and maybe that’s a mistake, seeing how much stock readers seem to place in The Last Hippie’s Whisky ratings and the numbers he assigns to nose, palate, finish and intangibles. But in the case of this strikingly original fifteen year old, I think I might make this concession: while sticking to my guns regarding a numerical score, I will be honest to admit that on a five star scale, El Dorado 15 year old easily demonstrates that it warrants no less than four, and if it wasn’t for its even more stellar older brother, I’d give it a 4.5 star rating right away.

El Dorado 15 is on par with the Zaya 12 year, and handily eclipses the Captain Morgan Private Stock, and gives the Bruichladdich Renegade line and the upper level Flor de Cañas a run for their money at a lesser price. I actually think it’s better than most of these. If you’re looking for an intro to the world of good sippers, or a gift of liquor that is at the top of the midrange, look no further. You’ve found it.

After years of selling this top class 15 year old rum, El Dorado has come in for serious opprobium in the rum community for not disclosing the addition of sugar across the line (30-38 g/L for the 15 year old depending on who’s doing the measuring, and when). I still like the rum a lot, and don’t always have a problem with additions, but I’m a bear on disclosure, and really annoyed by the fact that it was never acknowledged by DDL, to this day.