L’Esprit is a small French brand founded by Tristan Prodhomme of mixed Welsh, Scottish and Breton ancestry. His biography is about as interesting as any I’ve come across. Strictly speaking, he and his small operation are not into rhums, but whiskies (which miffs me, because I think their relative importance should be reversed, but I can’t have everything, so…). Somewhat like Don Jose Navarro of Havana Club who gained a degree in thermodynamics and then turned to distilled spirits, Tristan majored in Philosophy before evincing a strong interest in the obscure Scottish tipple, although to that point he had been no more than a dabbler in the field – in other words, he drank it. In 2003, needing to finance a holiday in Scotland, he ended up working at The Whisky Shop in Edinburgh, and much to his own surprise, did not return to France (Brittany) for four years. In that time he gained a wealth of experience about the different kinds of whiskies, tasting and selecting and buying them, and something about the fundamentals of the business as a whole. 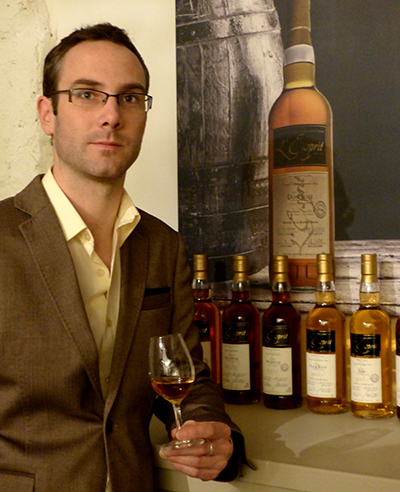 By 2007 he was straining at the leash and wanted to return home. Moreover, he wanted to expand the selection of whiskies available to the French consumers, and he simply could not fathom why, with such a large scotch-swilling population, there were so few stores dedicated to their sale. He was confident enough by then to feel he could start up his own shop, and set about doing so. Somewhat like Nine Leaves but without the still, Tristan opened up Whisky&Rhum with his partner, and became the owner, purchasing agent, sales manager, accountant, secretary, designer, webmaster, deliveryman, carpenter, independent bottler, all in one (or two, depending on how you look at it). Calling himself a specialist, not a generalist, he kept his shelves stocked with what he himself had selected, rather then going on buying sprees and shelling out for everything in sight, a practice of which he disapproves. This way, one infers, he gets to be able to recommend everything he sells, and knows it by its first name, which may keep sales smaller than an “everything is here” establishment, but permits him to stand behind each and every product he stocks.

Some years later, Tristan remembered his own personal reference rum, the Rum Nation Guatemala 23 year old (for which I have myself been searching for years – it’s one of their earlier bottlings), and in thinking about it, wondered why rum was not as commercialized, or even as well known, as the whiskies were. Rum had, at this time, just started to take its first real baby steps into its own renaissance, helped by many new bloggers who had become active around this point and were raising the profile of the spirit around the world. Single-cask full-proof rums “back then” were making small splashes but few ripples, helped along by indies such as Renegade, Silver Seal, Moon Imports, Rum Nation, Fassbind, Samaroli and a few others (in spite of its age, Velier had not yet penetrated the mainstream and changed the game…that came later). But, like others before and after him, Tristan thought that rather than mass produced 40% bottlings everyone drank, he could do better, bootstrapping his experience with The Whisky Shop which also produced their own such variations, the quality of which was always above-par. 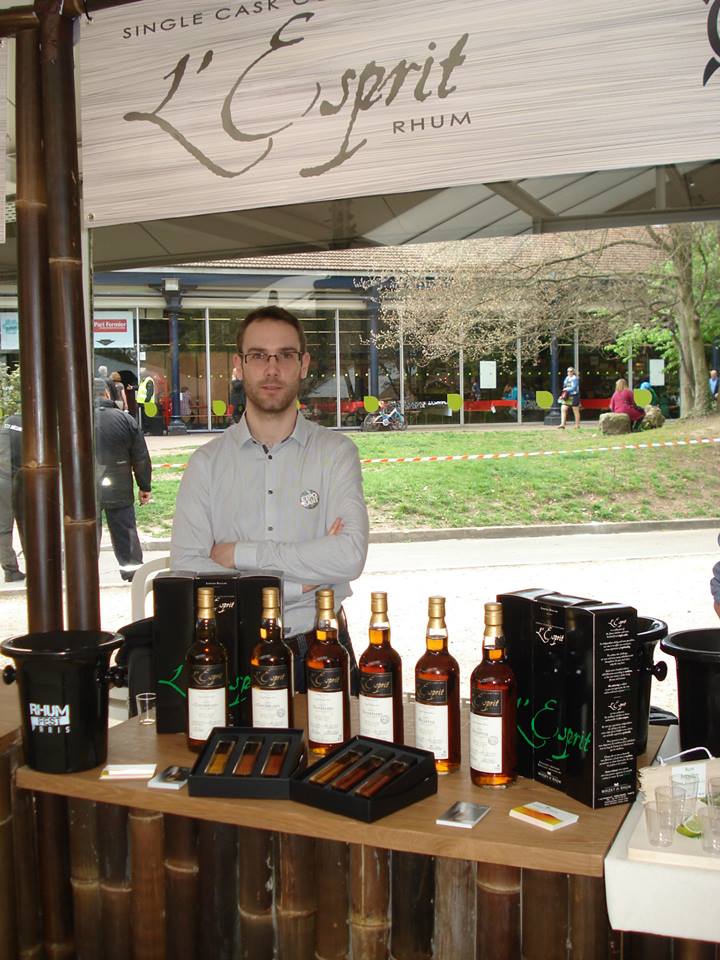 With this in mind, in 2010 he launched the marque of L’Esprit (“the spirit”, or, “the mind”, which kind of makes sense, right?) with two whiskies and a single rum. In the following years, for his rums and rhums, he bought one barrel at a time – from brokers, not distilleries, so primarily aged in Europe – and spent time ensuring that what he put on the shelf was something he personally enjoyed. Because his establishment was still small, he didn’t go the Rum Nation route and never issued hundreds of cases of the rarefied juice at a time, spread out over the entire world. His expectation and strategy was more modest, and stayed at single casks, at most a couple hundred bottles, and to this day you’ll have to do some legwork to find one outside of Europe in general, and France in particular. Of course, it’s still whisky that dominates his interest, but in quiet corners of the rumiverse where the grog-blog boys hang out, there are growing whispers that the man makes a decent rhum and it might be worth getting them while they last.

While eschewing filtration and additions of any kind, Tristan doesn’t really go in for the full cask strength experience, preferring to tame the beasts with water – this is why most of his sample kits have a sample bottle with water included. He believes that dilution is perfectly fine, since “It works!” – it brings out subtler flavours in the spirits, permits perfumes, smokiness, the quieter notes, to shine and become more evident; high-power intensity often masks these. As a consequence, he prefers a range of 45-50% in his bottlings, though in recent years, bowing to the wishes of the market, he has produced rums that are stronger, always in lots of a hundred, from the same barrels as the lower proofed ones; he noted in an interview that while this is what other shops wanted from him, his own experience was that 46% rums sold much better and were also better value for money in his own estimation, so he produces both. A proponent of terroire, he doesn’t blindly follow that as a lodestar, and selects the casks he buys primarily because of his notion of their quality, and his own judgement.

That judgement seems to be quite solid: he’s issued rums from Brazil, Belize, Guadeloupe, Trinidad, Barbados, Haiti, Guyana and Jamaica (all the old stalwarts, I like to joke), and it’s likely that as his reputation and brand becomes better known, he’ll expand and go to other countries, issue different variations. Already he has an arrangement to have La Maison de l’Hédonisme distribute his bottlings (including the other drink), and it’s probably just a matter of time before we see more. There are two shops now, one in Rennes an another in Vannes. DuRhum, ever ahead of the curve, did a feature on the company in 2013, the Rumporter magazine featured his rums twice, Serge of WhiskyFun has consistently rated the rums well (the Caroni got a 91), he was at the 2014 Paris Rumfest showing off his stuff, and there’s no doubt more is coming.

Independent bottlers are not as rare as four years ago when Cyril first wrote about this tiny company and many are much better known. Most dip from the same well in assembling their single-cask, fullproof rums and rhums – what to some extent marks Tristan out from the others is the slow, patient way he has of improving those casks he buys, incrementally expanding the range and the quality each time. If the mark of any independent bottler is how much we want to source the earlier rums they made at the beginning of their careers (like Rum Nation’s 1974 Demerara, or Velier’s Skeldon 1973), then I believe that we should pay some attention to L’Esprit as well. This is a company that, small or not, has potential to grow into something bigger in the years to come, a journey in which I at least, wish the man a lot of luck.

Sources (most are in French):

The list of rums issued as of January 2017 is below. I’m fairly certain this is most of them, to that point, but it needs updating beyond that date.