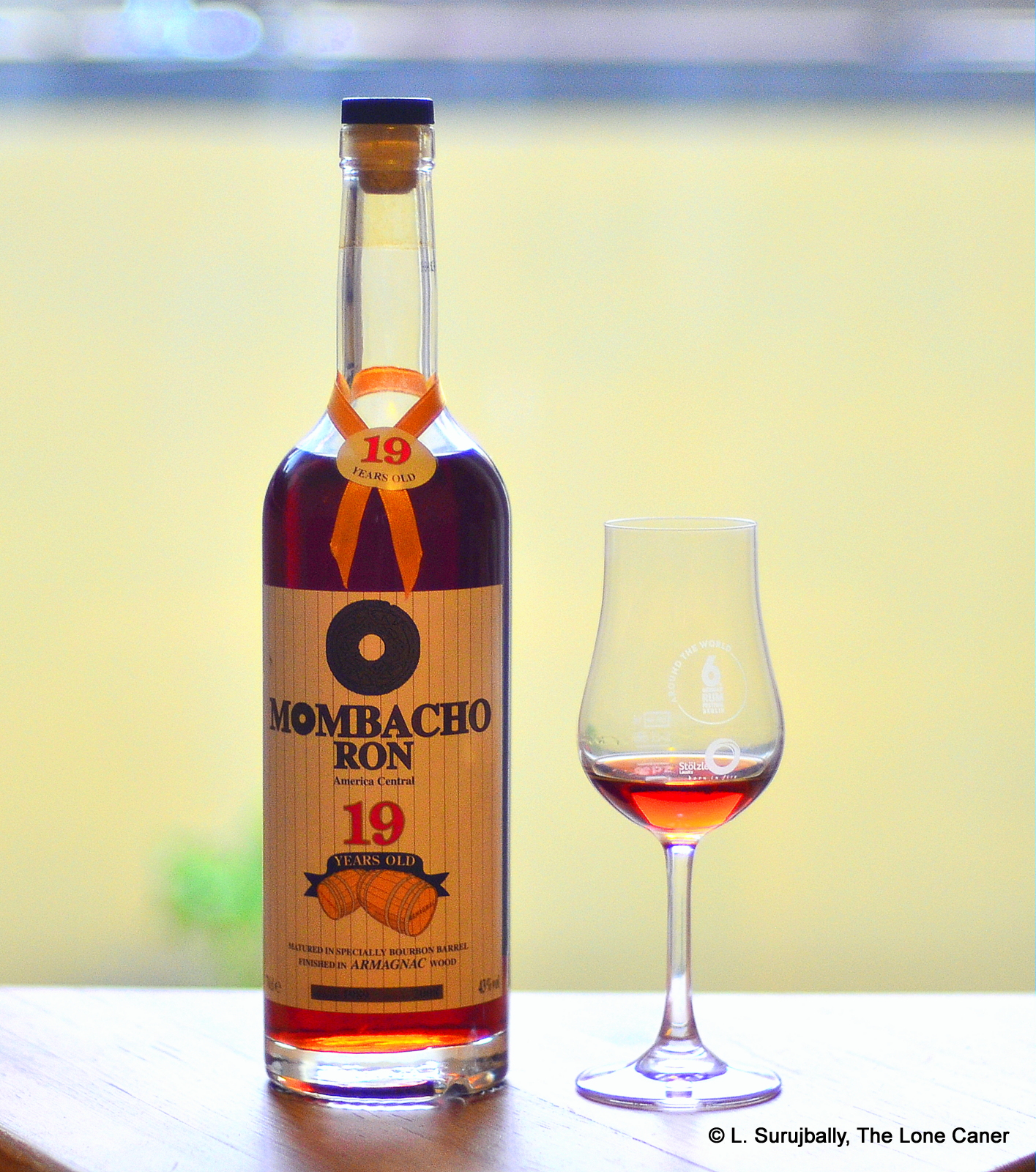 Perhaps it would be better to start with the straightforward tasting, lest my snark bend your mind were I to lead in with the commentary instead of finishing with it. The Mombacho 1989 Central American rum does, admittedly, boast and flourish some impressive chops on the label: 19 year old rum (1989-2008), finishing for the final two years in armagnac casks, reasonable strength of 43% (I said ‘reasonable’, not ‘outstanding’). Looking at other bottles of their range it seems within the bounds of reason to assume it’s from Nicaragua, though the ‘Central American’ noted on the label might suggest a blending with other rums from the region. 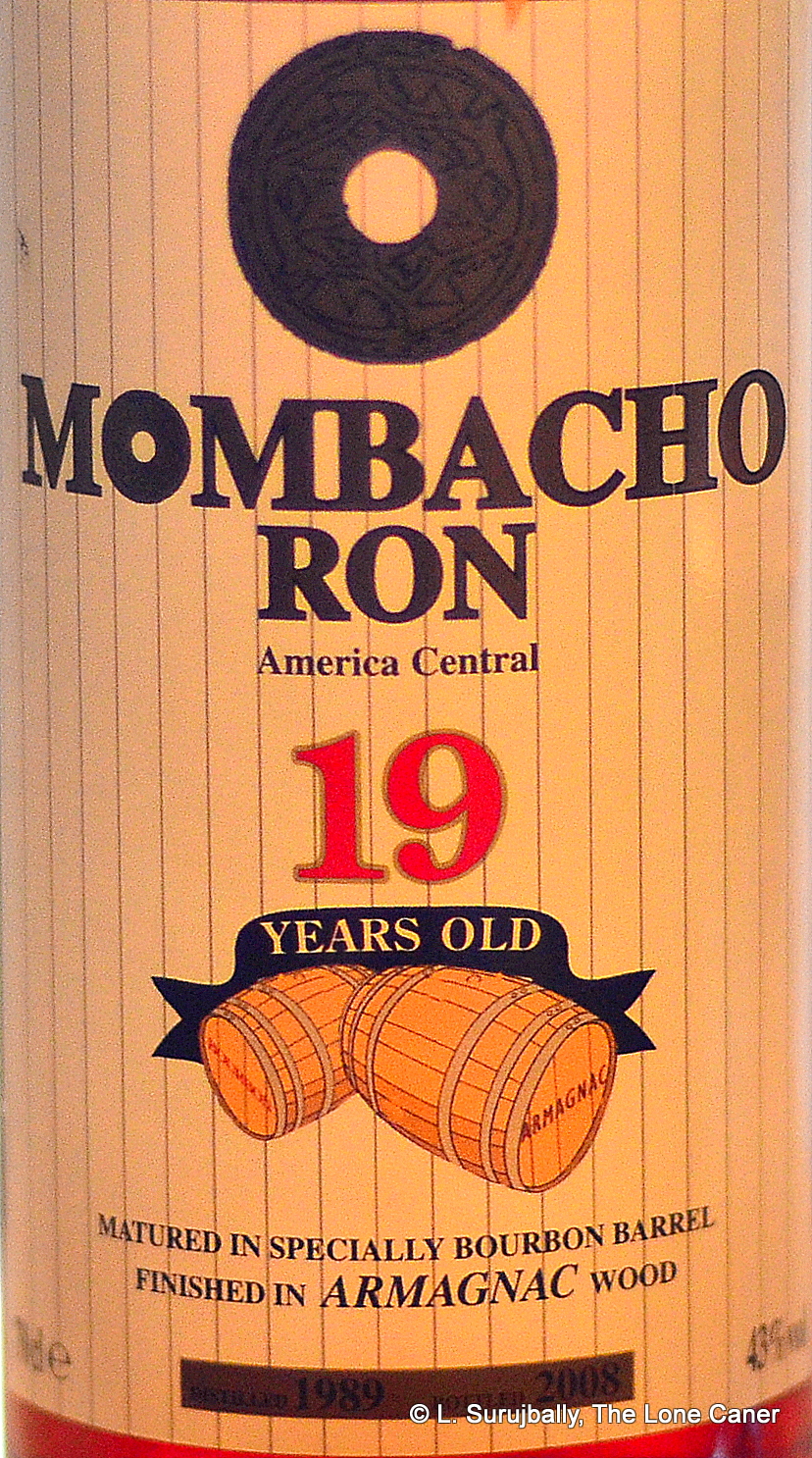 The nose is quite good for something I feared would be rather thin: unsweetened chocolate and coffee, some dark fruit – nothing as deep and brooding as a good Demerara, mind, but nevertheless, there’s a kind of muskiness to the aromas that worked well. Baked apples and a sort of cereal background, something like nice blueberry tart – I assume that was the armagnac finish lending its influence – with an ashy background to the whole thing.

Tastewise, also nothing to sneeze at, with a rich red wine taking the lead, plus prunes, apricots, stewed apples and burnt sugar. In its own way, it felt a little over-rich so maybe something was added? I tried it in conjunction with the Compagnie des Indes 17 year old and the Blackadder Raw Cask 12 year old (both from Nicaragua) and it is in the comparison that I got the impression that either it was doctored a mite, or the finishing was simply too dominant. With water additional flavours of honey, vanilla, cereal and tobacco could be discerned, plus licorice and some oakiness, and overall it had a nice rounded feel to it. Even the finish had that balanced quality to it, though quite short – cherries, peaches, prunes, anise, gone too quickly.

It was said to be the best rum in the world in 2008, but I’ll tell you frankly, when I read that I just smiled, shrugged and moved on – it was good, but not that good. Not bottom shelf by any means…and not top shelf either. Let’s put it somewhere in the middle.

Opinion (you can ignore this section)

So what to make of a rum that is purported to be nineteen years old, yet whose provenance is shrouded in mystery? Mombacho is a rum brand which has a website and a Facebook page (among others) that are masterpieces of uninformative marketing. About all you get from these sources (and others) is the following:

My personal assumptions are as follows: I believe this is a Flor de Cana based rum. The taste profile, and the absence of any concrete contact info of the producing distillery, if there is one, points to this (some online webpages speak to a distillery, never named, never located). I think it has been bought aged as is from FdC (they laid in a lot of stock in the 1980s as a hedge against hyperinflation and political problems, so the assumption is reasonable), and the rebottler/blender, whoever they are, aged it a further while in the armagnac casks for the finish. Some blending of barrels is highly likely, because any limited outturn would have the number of issued bottles proudly displayed as well.

Everything else I found in my research is glitzy pictures and self-promoting blah of zero interest to the diligent, curious rumhound. Even on the large Facebook rum clubs where an occasional mention can be found, about all you’re walking away with is that some people got one of the rums from the brand, but without details or facts of any kind on the brand itself. It’s been a long time since I’ve seen such an informational black hole

This enormous lack of background material does not make me a happy camper. I can’t trust a company which has no information behind it, therefore I can’t trust the provenance, so I can’t trust the age, it throws suspicions onto the entire label, and with all these doubts, it inevitably leads to suspicions that the price I paid (€120) was excessive for what was on show. I honestly don’t care if the makers are marketing tyros or business neophytes or freshie rum dilettantes – more should have been provided, even back in 2008.

This is where honesty in labelling becomes so very important. If this was a thirty-dollar rum, I would not worry overmuch about it, but for three figures it begs some questions. And when none of this is readily available, it devalues every other statement made in the marketing literature, or the bottle label itself. If anything positive emerges from this tirade, it is that it shows what is demanded in 2017 for any rum on the market nowadays. I doubt a new entrant to the field could get away with what Mombacho did nearly ten years ago, and the 28 year old Panamanian Arome may be the proof.

So yes, it’s a decent rum, and no, I wouldn’t buy it again. Not because it doesn’t have some quality, but because I rarely spend that kind of money more than once on a no-name brand with little but air behind it.

I sent out a note to many of my rum swilling friends….none of them could tell me anything about the company. Mombacho’s FB page has so far declined to respond to my message asking for further info, an the mombacho.eu website was similarly unhelpful. But, if I do get some feedback, I’ll update this post.