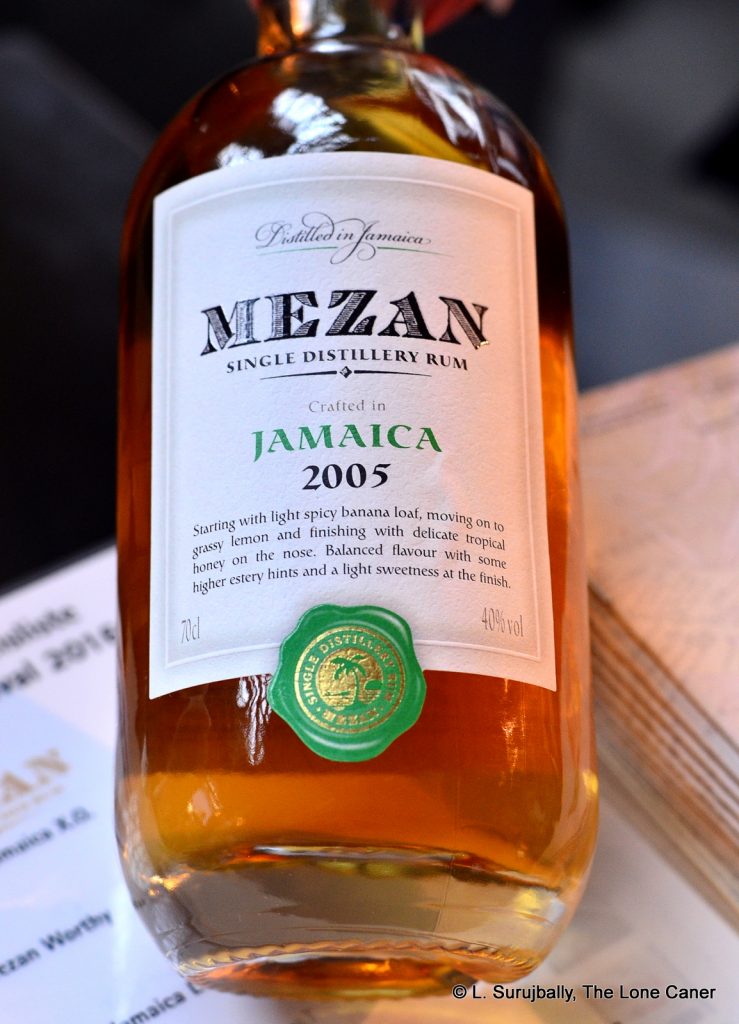 The question that arises when drinking a rum that is 10 years old is whether the relatively placid 40% strength helps or hurts given our rather more discerning palates these days. The blended Jamaican XO from last week’s review, with its indeterminate age and provenance, succeeded modestly in spite of its wispiness because somehow the tastes still came through and provided a showcase for the style…and for its price it was a strong low-end contender that punched above its weight. While the 2005 10 YO we’re looking at today is also bottled at that strength – subsequent editions are a bit stronger – it is quite a few rungs up the ladder. In fact, it’s a quietly successful offering from Mezan, and should not be passed over by those who disdain anything except cask strength juice.

Speaking immediately about the nose, even though the strength was the same, the 10 year old presented as much more emphatic and distinctive than the XO. Bananas and lemons, brine, olives, vague sweetness. Time helped to some degree and after a while one could sense cherries, a little funkiness, unsweetened chocolate and a continual background of orange peel, all of which remained light and relatively unaggressive, but quite clear.

The taste was the part I liked this most, because it was light and clear…kinda flirty chirpy, even sprightly. The 40% does no damage to the palate and is actually quite pleasing in its own understated way. Green grapes, apples, cider, raspberries, tart unsweetened yoghurt, chocolate and nuts underscored by the thin line of citrus peel, and supported by a faint but noticeable set of fleshier fruits (not-quite-ripe apricots and peaches and mangoes) – the funkiness of esters was there, just dialled down, which distanced it somewhat from more traditional hard-core Jamaicans that are getting all the press these days. The weakness of the rum as a whole was probably the finish, which was really too short and fine, and added nothing particularly new to the fruit basket or the tastes – some citrus, cherries, green apples and that’s about it.

Overall, I liked it but the distinctiveness of the estate profile refused to come through that general mildness, which is, of course, something of a fail mark for a country whose rums have been getting a lot of attention in the last few years. A few extra points of proof would have helped a lot, I think — and indeed, Mezan have issued a 46% version of the Worthy Park 2005 in 2017 which I have not tasted, but which is likely to address the issue (this one was a 2015 bottling).

The finish and aftertaste of the Mezan 2005 (though not the nose and palate) to some extent suggest why some people do not entirely go for softer proof and continental ageing, which is what I believe this is. That final part of the experience is simply too nondescript and inconspicuous and over far too quickly. But we should not be too quick to trumpet “tropical ageing only!” like it was some kind of universal truth, because we should keep in mind the sterling Worthy Park 7 YO 53% from the Compagnie des Indes, which was a better rum in every way and was also aged in Europe (note also Wes’s admiration for the 2015 10 YO Worthy Park from Kill Devil). Also the fact that overall for its price, this is a pretty good rum for those who want to know more about the Jamaican style of Worthy Park without getting their faces ripped off by a hot blast of esters bolted to a cask strength bitch slap. On that level, I’d say it’s a qualified success. 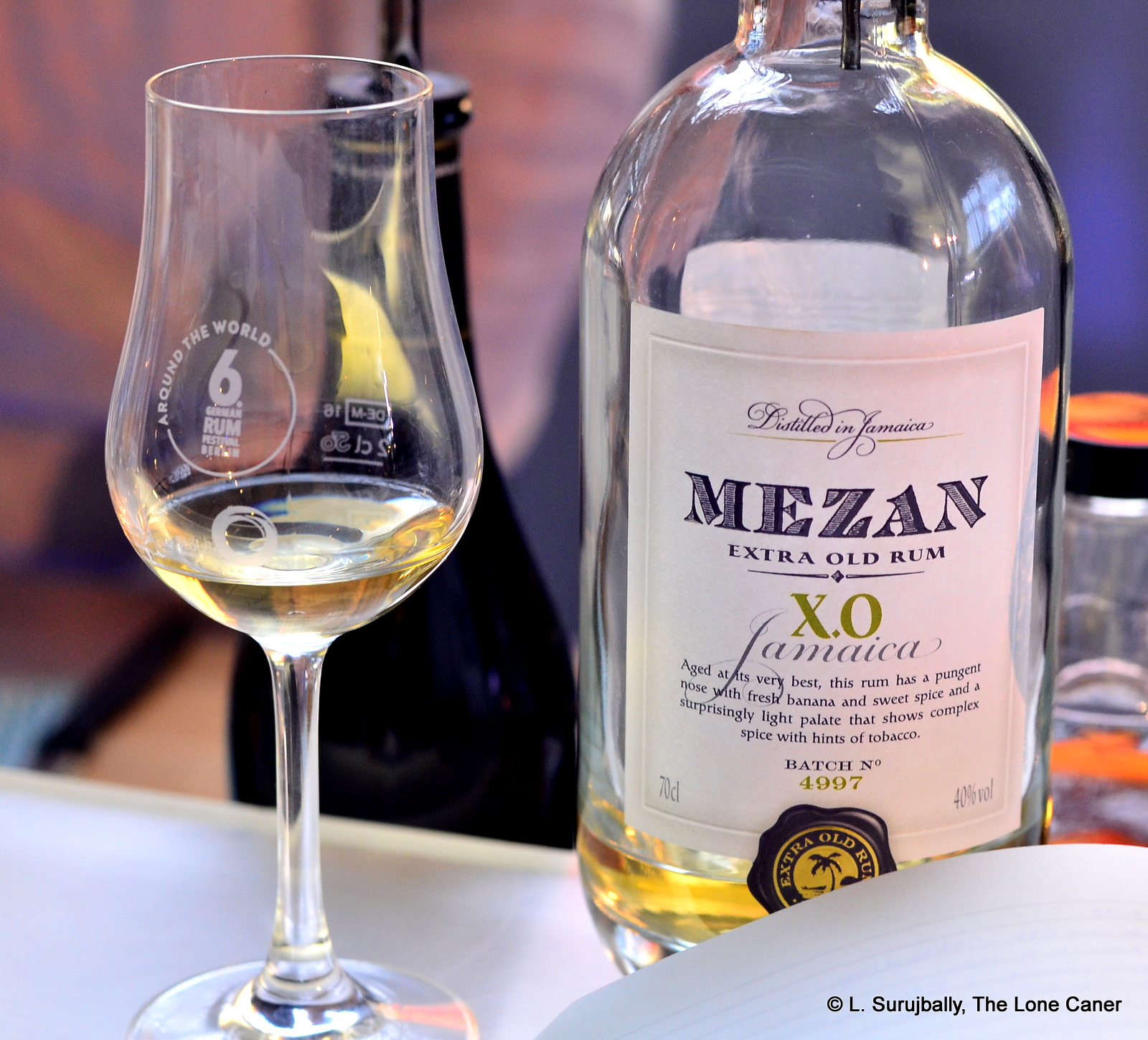 Mezan is an independent bottler out of the UK, formed by a gent named Neil Matthieson who ran a spirits distribution company since the 1980s and used it as the parent company for Mezan in 2012 (he is the managing director of both). Following the usual route for an independent, they source barrels of various rums from around the world and bottle them in limited editions. However, in the XO they have opted for issuing a blend of rums from Jamaica – not from single distillery, but from several, and The Fat Rum Pirate notes it as having two components from Worthy Park and Monymusk (there are others, unidentified) and Steve James over at the Rum Diaries blog wrote that he heard that the youngest part of the blend is four years old. I myself was told by a rep that all components of the blend were in the 18-24 months range, but that might have been just for the rum from my batch number (#4997). I’d suggest ageing is continental.

According to Matt in his longform essay about the XO, Mr. Matthieson prefers to bottle at a strength in the low forties. This has both positive and negative aspects – it becomes more accessible to people not used to cask strength rums, but at the price for the enthusiasts of weakening its clarity. The nose of the XO makes this clear – it’s nice and aromatic…but thin, very thin. Sure, there are notes of pot still funkiness, brine, olives, dunder, rotten fruit, some plastic – it’s just that they’re faint and light and too wispy. That delicacy also permits the alcohol forward note to be more dominant than would otherwise be the case, and it presents more as something spicy and raw, than a delicate and nuanced rum.

The palate permits the low strength to come into its own, however. Once one waits a while and allows oneself to get used to it, the flavours become quite a bit more distinct (though they remain light). Esters, overripe bananas and some nail polish to begin with, moving into a smorgasbord of rather light sweetness, plastic, brine, citrus and green apples – a sort of combination of fruits both fresh and “gone off”. Somehow this all works. And I think that the rum deserves a second and a third sip to pry out the nuances. The finish is no great shakes, short and sharp and spicy with more crisp fruits and brine, but so quick that the memory one is left with is more of a young and feisty rum than a seriously aged one.

Certainly the overall impression one is left with is of a young blend, possessing enough complexity to warrant more careful consideration. No need to mix this if you don’t want to, it’s decent as is, as long as chirpy young Jamaicans are your thing. As a Jamaican representative rated against the pantheon of better known and perhaps more impressive rums, though, it reminds me more of young and downmarket Appletons or J. Wray offerings than anything more upscale.

What makes the rum a standout is its price. Retailing in the UK at around £30 and of a reasonably plentiful outturn, it’s clear that the XO is an inexpensive way to get into the Jamaican style. There’s a lot of noise online the estate-specific rums like Monymusk, Clarendon, New Yarmouth, Worthy Park and Hampden (and that’s aside from Appleton itself), but not everyone always wants to pay the price for cask strength bruisers or indie bottlings that are so distinctly focused. When it comes to an affordable, living-room strength blended rum that is middle-of-the-road funky and estery and works well as both a sipping drink or an ingredient into something more complicated, the Mezan Jamaican XO may be a very good place to start, no matter how you like drinking it. And at the very least, it won’t unduly dent your wallet if your own opinion turns out to be less than stellar.