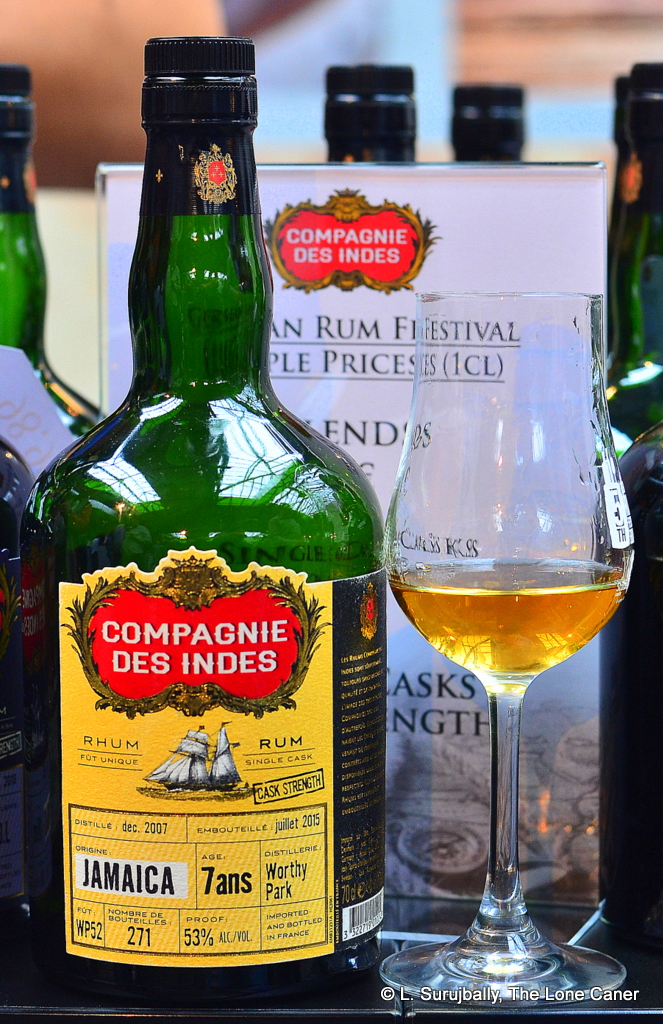 When a bunch of us were dissecting the 2016 Berlin RumFest, we all noted something interesting – the rums which seemed to be making the biggest splash and gaining some of the best accolades were the Jamaicans, as if they were charging out of the gate and making up for lost time. Certainly the visibility of the island has been increasing in the last year or two what with the issuance of new rums from previously marginal distilleries (Clarendon, Hampden, Innswood, Longpond, Worthy Park), and the appearance of new variations at various festivals.  And many of these rums are amazingly good – perhaps more than anything else they showed what we’ve been missing all this time. I can almost feel a twinge of sympathy for Appleton in the years to come.

If you doubt the rise of the New Jamaicans, look no further than the Worthy Park rum issued by Compagnie des Indes. The Hampden 58% was great and I scored it highly – this one is better still.  I haven’t seen anyone take it apart yet, and it hasn’t made much of a splash, but this thing is superlative, if limited (to 271 bottles). The rest of the Jamaican loving rumworld would go ape for this rum if it was more available, and I swear, if Velier issued the thing, we’d see a mass stampede that would make the online issue of the Foursquare 2006 look like a teutonic model of orderly and restrained sales efficiency. 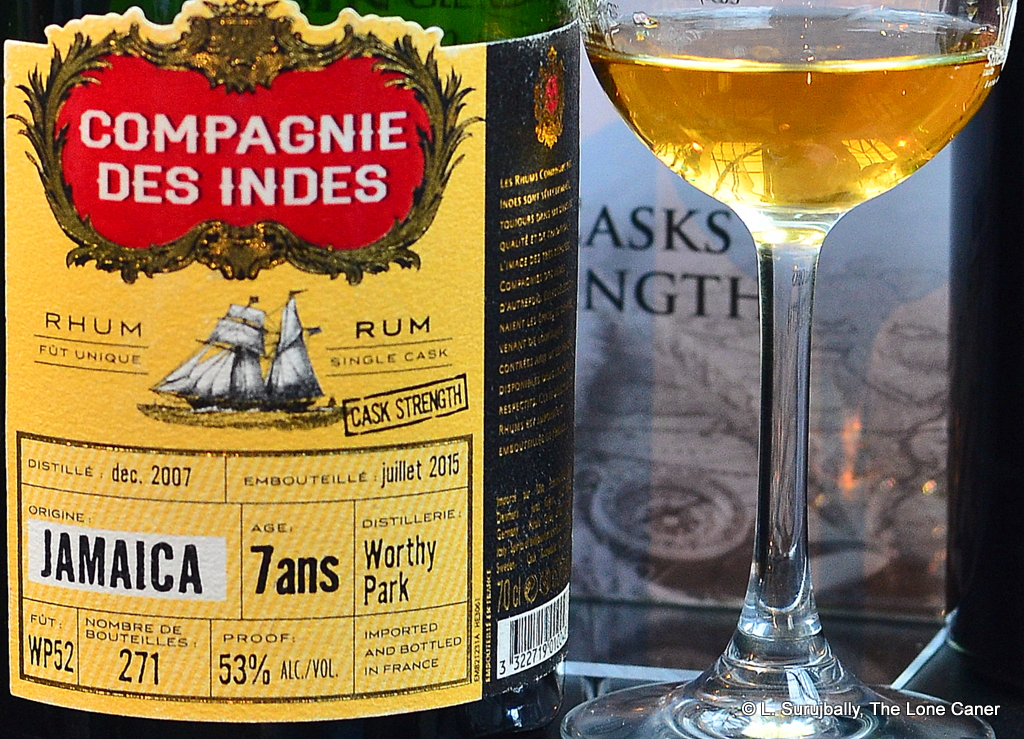 Bottled at a stern and uncompromising 53%, which is still quite reasonable even for those too timorous to buy real brute-force sledgehammers like the >65% rums, the bare details are simple: a seven year old rum from a single cask, bottled in July 2015, aged in American oak, entirely in Europe.  And yes, from Worthy Park: if you are interested in such things, the Cocktail Wonk took the time and trouble to visit and wrote a detailed article on the subject which is worth checking out, since it would be an insult to abridge into a few sentences here.

At first blush it seems odd to say that honey, cream cheese and crackers were the initial aromas; and was that cucumbers, smoked salmon and parsley on rough peasant bread?…surely not…but yes it was, plus dill – it was all very faint and more hint than bludgeon, but very much there. I literally stared, bemused, at my glass, for a few minutes, before attending to business again.  After the amazingly off-base beginning, much more traditional smells started to assert their dominance – citrus peel, nuts, bananas, soft white guavas, some vanilla and cinnamon, nothing really tart or acidic…the rum was not so much soft and easy as firm and quite crisp, almost prissily precise.

It was on the palate that its quality moved out of yummy into awesome.  There were cherries in syrup on a cheesecake, quite delicate; ripe but still tart slices of Indian mangoes.  Yes it was hot, maybe even sharp, yet it was as clear and precise as a Chopin nocturne, and the palate delivered on what the nose had promised, adding caramel, brininess, an olive or three, banana skins, overripe apples, and cider.  It was, in its way, like a really good Riesling, with a sparkling red grapefruit background striking a delicate balance between sleaze and titillation, between sweet and salt, dunder and “rumminess” – it’s an amazing achievement, a wonderful rum, one of Florent’s best, and it finishes with some emphatic final notes of vanilla, cinnamon, very light sweetness of those cherries, salted caramel, and a last twist of lemon. I tried it three times over six hours, and still thought it was great the final time.

Every few years, our world seems to be dominated by rums of a different style.  For a while it was the Nicaraguans, Guatemalans, Venezuelans and Guyanese, then Velier exploded on the scene with its full proof Demeraras, followed by the Trini Caronis. The Bajans have come on strong of late (mostly FourSquare and St. Nick’s), and there are the agricoles, as ever, quietly and determinedly chugging beneath them all. Now it may be the turn of the Jamaicans to produce the most exciting work for a while. If just on a random sampling, something this good and this young appears out of nowhere, we may all be in for a cornucopia of wonderful rums from the island, of which this is just one.