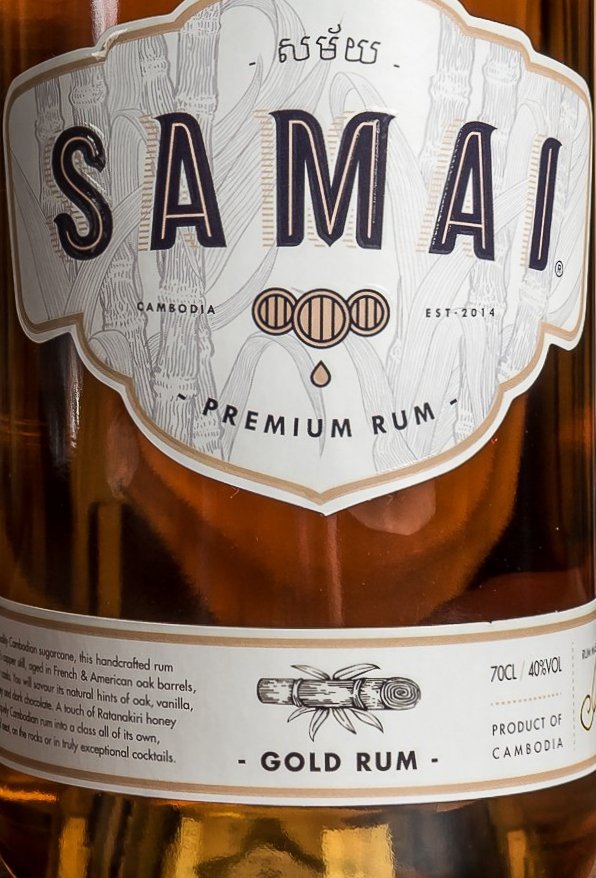 Now here’s an interesting standard-proofed gold rum I knew too little about from a country known mostly for the spectacular temples of Angor Wat and the 1970s genocide. But how many of us are aware that Cambodia was once a part of the Khmer Empire, one of the largest in South East Asia, covering much of the modern-day territories of Thailand, Vietnam, Laos and Viet Nam, or that it was once a protectorate of France, or that it is known in the east as Kampuchea?

Samai is a Khmer word for modern (it has subtleties and shades of meaning beyond that), and is the name given to a rum brand made by the only distillery in the country, a relatively new effort from a young company. It was formed by Daniel Pacheco and Antonio Lopez De Haro, a pair of young Venezuelan expats in 2014, who (the storyteller in me supposes) missed their home country and wanted to make an effort to bootstrap a local rum industry in a place more used to beer and rice wine and teuk thnout chhou (a whiskey-like spirit similar to Thailand’s Mekhong).

Made from molasses derived from locally grown cane and distilled in a pot still and aged for between one and two years, it is also, I should note, added to – it’s actually something of a flavoured rum, since a touch of honey from Ratanakiri (a province in Cambodia known for its very tasty honeys) is also added. Too, the ageing is done in american and french oak and sherry casks, and while the company website makes no mention of how this is accomplished, I am assuming that various barrels of rum with these various woods, are all married together for the final product, which gives it an interesting flavour profile, to say the least.

All right, so we have a new distillery, a new rum, and no notes. Let’s run through it and provide some for the curious.

Nose first. As befits the strength and the production methodology, it’s soft, salty, and reminded me of fish sauce and miso soup. It was also musky, musty, dry and kind of thick, with aromatic tobacco, sweet soya and molasses coiling beneath it, sort of a combination of maggi cubes, brown sugar, and raisins – intriguing to say the least. Some very ripe fruit (bananas, pineapples) that edged towards rottenness, without ever stumbling over into spoilage. I tasted it blind and thought it was a standard proofed (it was), and it reminded me of a cross between a cheap rough darker Demerara rum (say, DDL’s 5YO, Young’s Old Sam or Watson’s) and a low-ester Jamaican.

A higher strength might have not worked as well for this rum, and given it a harshness which would not have succeeded quite as nicely as it did – as it was, it tasted nice and smooth, warm and sweet, with just enough bite behind the demure and easy facade to show it wasn’t 100% milquetoast. The palate suggested biscuits, cereals, molasses, brown sugar, vanilla, caramel, winey notes, a melange of difficult-to-nail-down fruits – not excessively complex, but enough going on to be intriguing. It accomplished the odd trick of seeming more sweet than it was, partly because of the thickish mouthfeel and texture, and was set off by a few sly touches all its own – some brine, sharpness and that background of syrup, probably from the sherry and honey influence. It was, shall we say, very pleasant and unintimidating, ending with a quietly impressive and surprisingly long finish, dry, dusty, somewhat sweetish, with a touch of fruit salad set off by cumin and masala.

Well now, what to make of a rum like this? It does not line up directly with any style one can immediately pinpoint, which is part of its attraction — I’d say that it’s geared towards the softer South/Latin American / Cuban or eastern palates (I was reminded of the Batavia Arrack, Amrut and Mekhong rums, for example, but not Fiji or the Japanese). The Samai Gold rum has perhaps more sweet than lovers of purer Jamaican, St Lucian or Bajan would prefer, but if you’re into DDL’s lower-proofed rums, Plantation rums or other Asian ones, this one would be right in your wheelhouse, and much as I usually sniff at sweeter rums these days, I can’t deny that with its slightly off-kilter tastes, it’s quite a nifty drink, partly because it is, in its own way, something of an original.

Rums like the Samai showcase again the pleasure one can have in exploring iterations in the spirit, in a way that is simply lacking in most others. It’s like a voyage of discovery that encompasses the whole world — each continent, each country, each distillery that makes rum, has some interesting variation on the theme. The under-the-radar Cambodian rum written about here is intriguingly different, tasty to a fault and gentle enough to appeal to a broader audience. And all that while maintaining a sort of unique taste profile all its own, adding yet another brick to the impressive and fascinating global structure that is Rum.