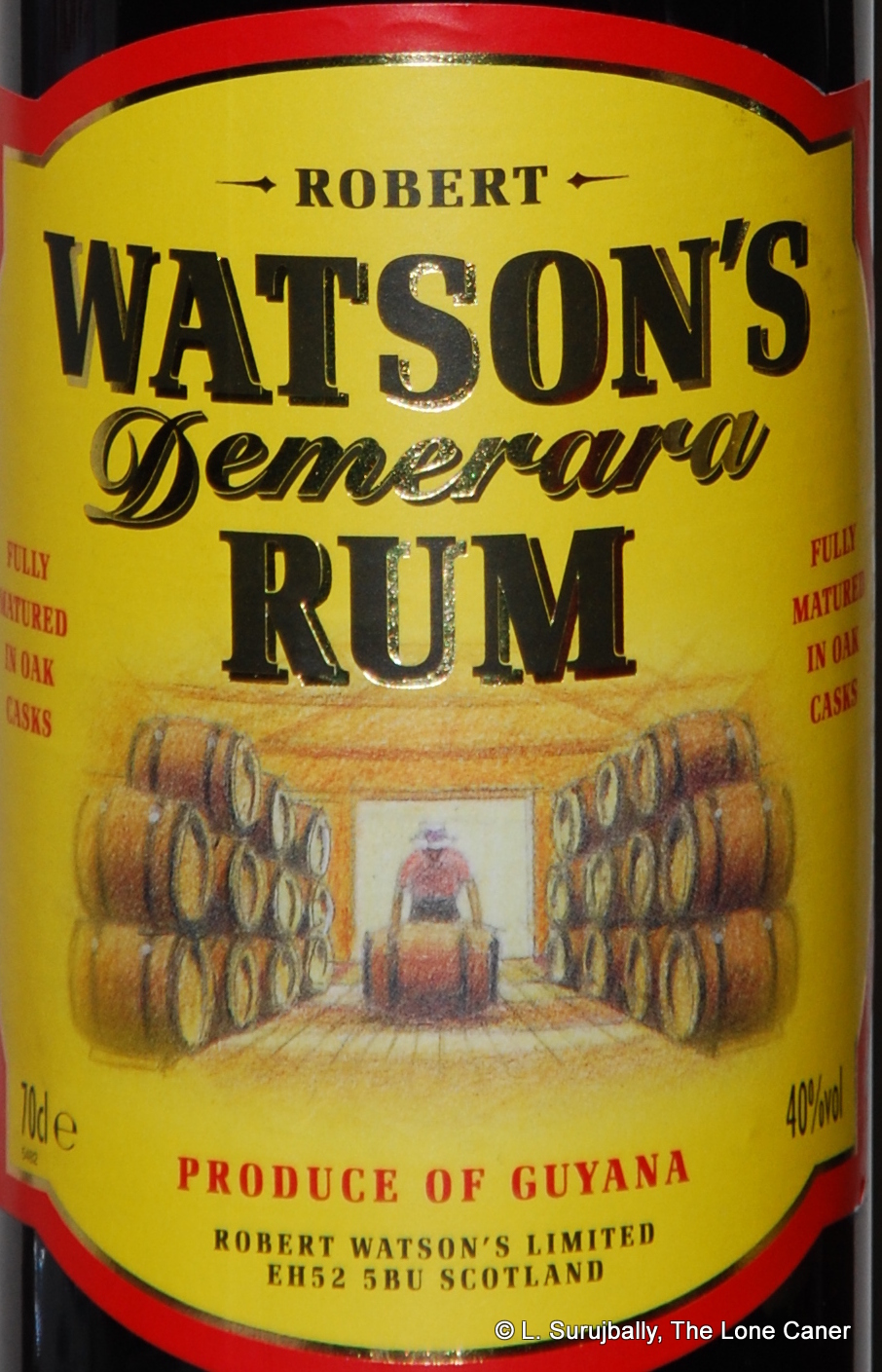 I’ve never hidden my affection for the Young’s Old Sam Demerara rum: for its rich dark character, thick nose and excellent mixing qualities.  Here’s a variation which simply blows it out of the water, because, unlike that simple mixer, Watson’s is in better balance overall, and is equally good as a sipper or a cocktail base.

People, I think are entirely too disbelieving of coincidences: when you consider that there are six billion plus people on the planet, I am actually amazed that there aren’t more coincidences.  One of the best in recent memory was the appearance of a rum named after one of our members: the Robert Watson Demerara dark rum, “a product of Guyana.”

Initial maturation is indeed done in Guyana, but final blending and bottling is done in Scotland by the company that owns the brand, Ian MacLeod distillers.  Established in 1933 by Ian MacLeod, the company was acquired in 1963 by the Russell family, who were primarily whisky brokers. In 2000, the company acquired the Watson’s Demerara and Trawler rum brands, but I cannot yet ascertain from whom, or where the marques originated.

Fine. After we finished grinning and congratulating Bob on the find and his suitable modesty in naming it after himself, we took stock.  Straightforward bottle, red metal cap. My picture, much affected by the five shots of various Ardbegs I had already consumed (my arms were twisted, honest) doesn’t really do it justice, but it glinted a deep red-brown colour, like burnished copper. 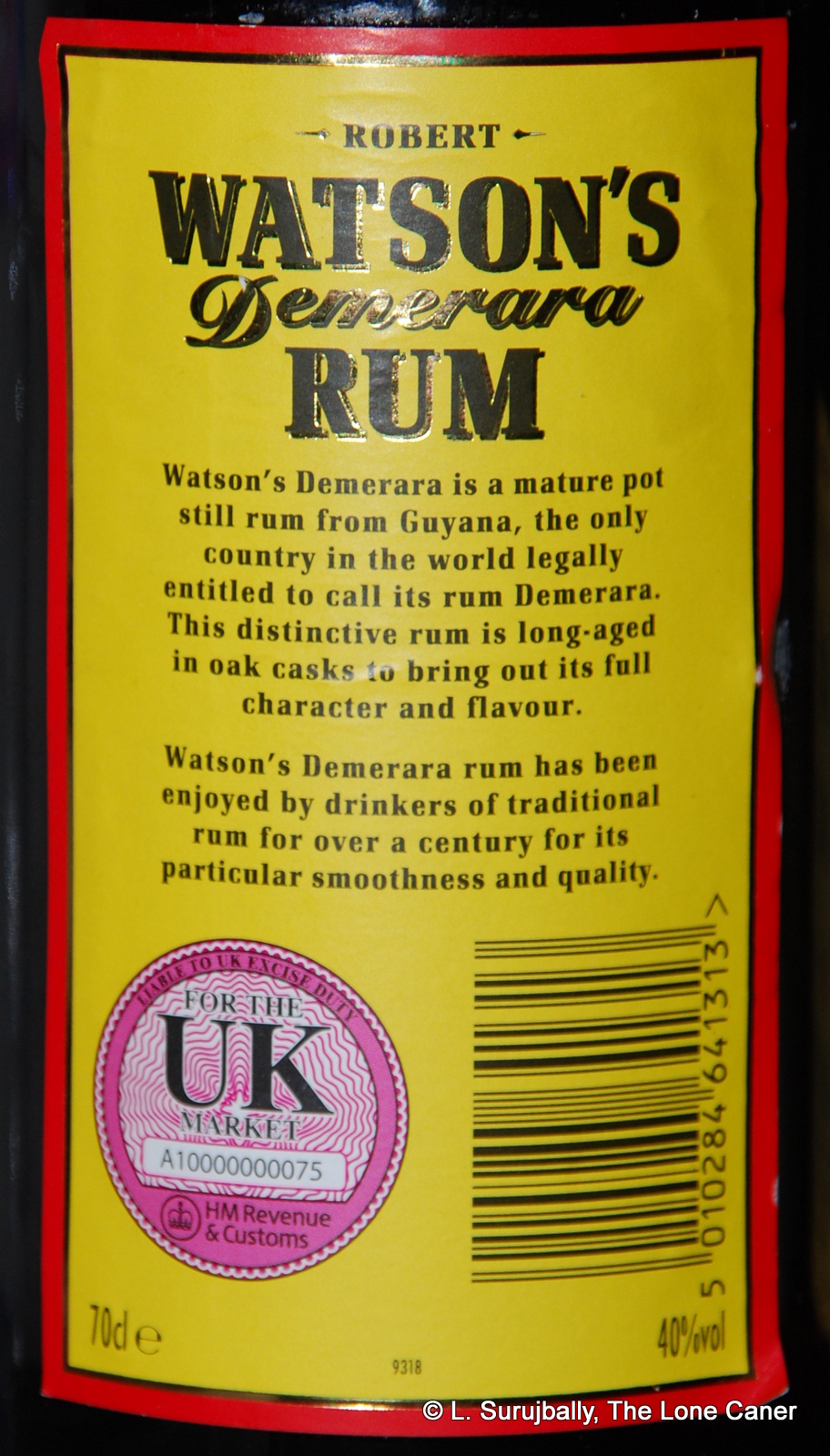 The nose was the first pleasure of the day.  Almost no bite or sting or medicinal burn, though some faint alcohol fumes were there for sure…just well masked and toned down.  And almost instantly I got sweet, rich fumes of molasses. Deep fumes.  Actually, Watson’s, like Old Sam’s, positively reeked of the dark sticky stuff and brown sugar from a freshly opened bag.  After we let it sit for a while, liquorice, nutmeg and something spicy curled around these strong and assertive scents. An excellent, uncomplicated snoot, in my opinion: no fancy additives or little thises or thatses, just the bare bones, well blended.

On the palate, it was full bodied and rich – a real Demerara rum.  It was smooth and deep, tasting faintly of chocolate, but I’d be lying to you if I pretended it had some sort of more complex flavour profile which it didn’t possess…because it doesn’t, and that’s okay, really. The molasses and sugar, with a bit of caramel and maybe vanilla, were the dominant flavours and you won’t get more than that (though the rum does exhibit a pleasing slight driness after a few minutes in the glass).  And the fade is lovely, enveloping and smooth, a dark slow burn that to me marks excellent rums.  The crazy thing I liked so much about Watson’is that I barely caught any real snarl and claw and bite of alcohol throughout – it really is surpisingly smooth. If in taste and nose this thing exceeded the Young’s Old Sam, then in the finish it simply blasted way beyond it.

It’s a pleasure to find a rum bearing the name of one of our members: you might say that’s quite enough by itself.  But to have it married to a deep and rich taste, a great balance and finish…well now, that’s an unforeseen delight, like my wife giving me a Christmas present in July. I do not believe others will share my genuine liking for this straightforward, cutlass-waving, boot-stomping Demerara rum (though I have made no secret over the years of my predilections in this direction). And while I’ve had my issues with Scottish distillers taking rum stock from the West Indies and making their own rum variations – not always successfully – with Watson’s I have so such problems. The thing is great.