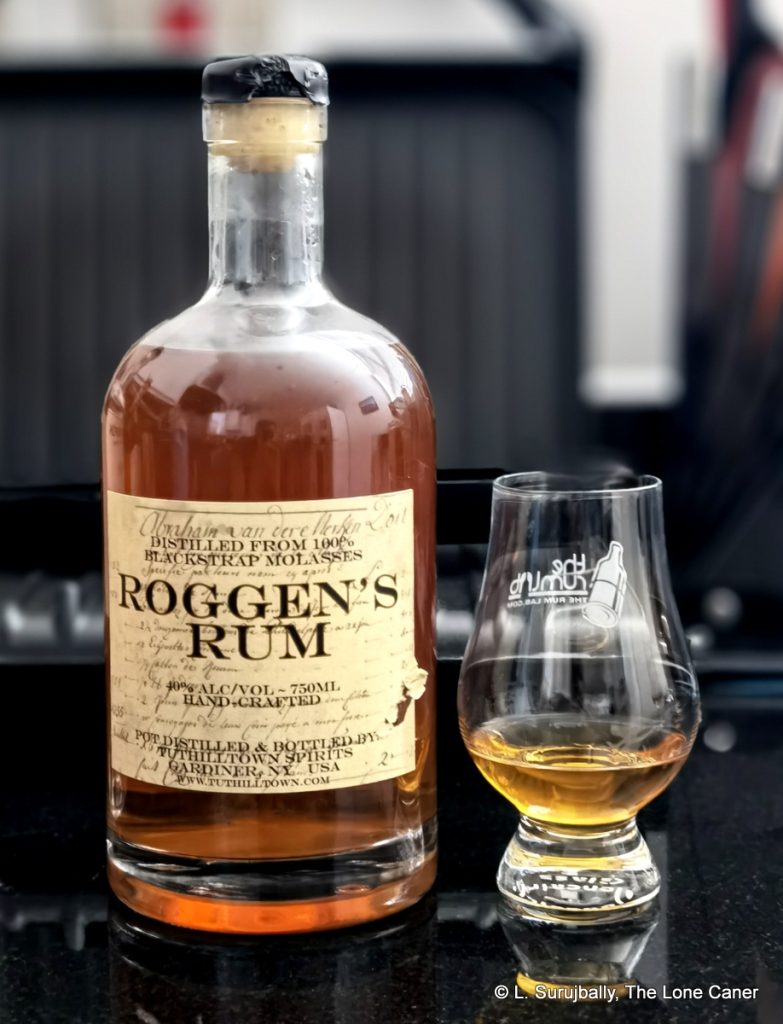 For a distillery whose founder had a not inconsiderable impact on craft distilling in the state of New York, it’s a shame they stuck with a product that has no end of local competition and is at best reviewed with occasional praise, mostly indifference and sometimes outright disdain: whiskey. And yet they produced a rum or two at one time; and one of them, this rum, while no great shakes, suggested that they had potential and to spare had they stuck with it. Maybe. 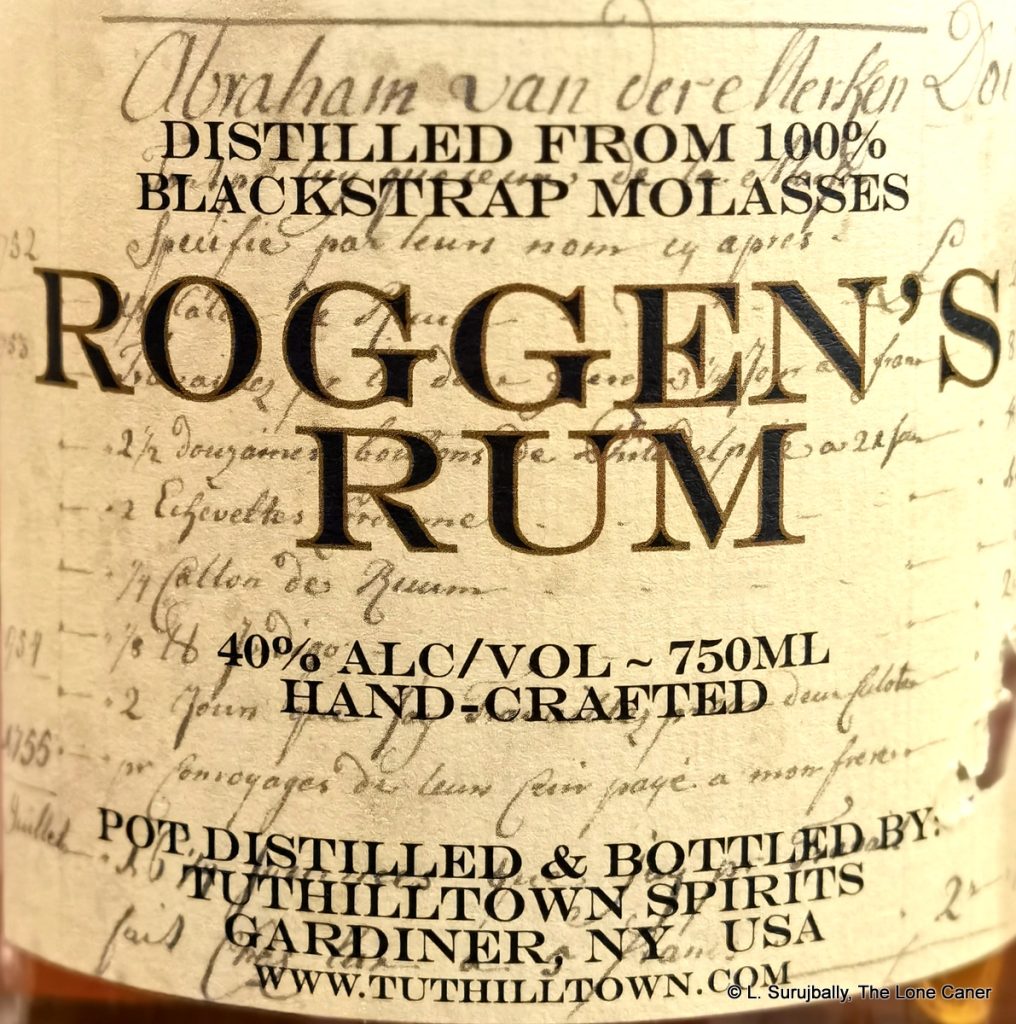 Palate – Vanilla, some apples and raisins, a little licorice and bitterness, and a twang of brine. Brown sugar, caramel, molasses, unsweetened chocolate, and that’s stretching. Essentially, there’s not much going on here. It’s not precisely rough or uninviting, yet the sharpness and youth makes it a drink to have with some care. 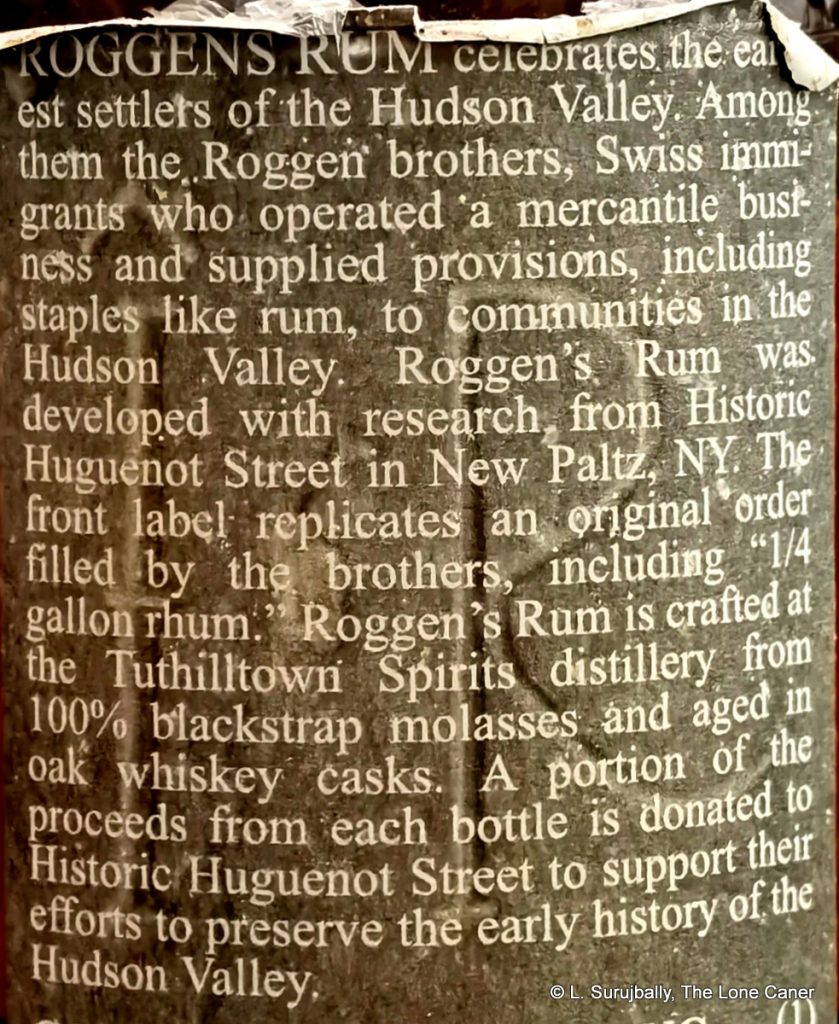 So, the company story, then, if this intrigues you. Tuthilltown Distillery was founded in the upstate-NY township colloquially known by that name (after a Mr. Tuthill who founded a grist mill there in 1788), but is formally called Gardiner. It was itself established by fleeing Huguenots who settled in the area in the mid-1600s and also established a small town slightly to the north called New Paltz. It was a thriving town by the mid-1700s, and it is useful to know that a pair of Swiss brothers – Francoise Pierre Roggen and Johann Jacob Roggen – emigrated there in 1749 and became merchants of some note.

As all good Americans micros do, the distillery went all-in on any distillable booze they could: eau de vie, brandy, absinthe, infusions, vodka, rye, bourbon, gin, and, of course, rum, you know the drill. But it was whiskey that commanded their attention and much like Amrut did, knowing the quality of their product, they did small bar tastings in Paris (yes, Paris) and got a distribution deal with la Maison du Whiskey, aside from whatever small sales they had in-state. This in turn brought them to the attention of William Grant & Sons out of Scotland, who bought the brand (but not the product) in 2010 and injected some much-appreciated capital into the company to improve infrastructure, marketing and distribution; in 2017 they bought the entire thing. At this point they dispensed with all the other spirits and switched entirely to the branded Hudson Whiskey and its variations. And this is why the website for Tuthilltown is dead, while Hudson Whiskey’s is alive and well and why no reference on the latter site will even mention that they once were a smorgasbord of all things intoxicating, including rums.

The fact that it’s topical newsmagazines that provide the background to the distillery, the name, the history and the rum’s titling — I searched through quite a few archival documents and websites to find the details used above — explains something of my frustration with distilleries who have no sense of their own history or respect for what they have done in years gone by. Granted Tuthilltown is not rum focused, but surely a listing all the products they have made in their existence should be easily available somewhere. This indifference to their product development and past roster, even if discontinued is simply bewildering. I mean, they made it, they labelled it, they sold it, it’s part of who they are…why pretend it doesn’t exist?

I hasten to add that this is not an exclusively American phenomenon – God knows there are examples galore across the geographical spectrum, like that Cadenhead VSG I almost thought was a ghost last year. Still, in contrast, take this counter-example: the Danish indie Rom Deluxe has a webpage devoted to their current releases, but they also have an archival section on their website where they list all their various older expressions made in years gone by. Labels, tech sheets, the lot. Given I can still find stuff from their earliest years knocking about on store shelves or collector’s basements, such material is a godsend when asking the inevitable question “what is this thing?” Quite a different mindset than so many others.

I’ve made a point of bringing up the issue of loss of current records (or having no records at all) for years and it’s the sort of subtle thing nobody really worries about, or notices…until they ask a question and realize that nobody ever wrote anything down, or recorded it and the info so readily available before, now only resides in derelict and near-inaccessible company archives, or on old web pages no longer “live”, or on some long-forgotten FB post. Rum databases like Rum Ratings and Rum-X help, for sure, but I think if companies themselves took some ownership of their releases and made sure the details were always available, then that would just help everyone out when they see an obscure bottle on a dusty shelf somewhere. Because without it, we’ll be floundering around ten years down the road — even more than we are at present — if steps are not taken now.