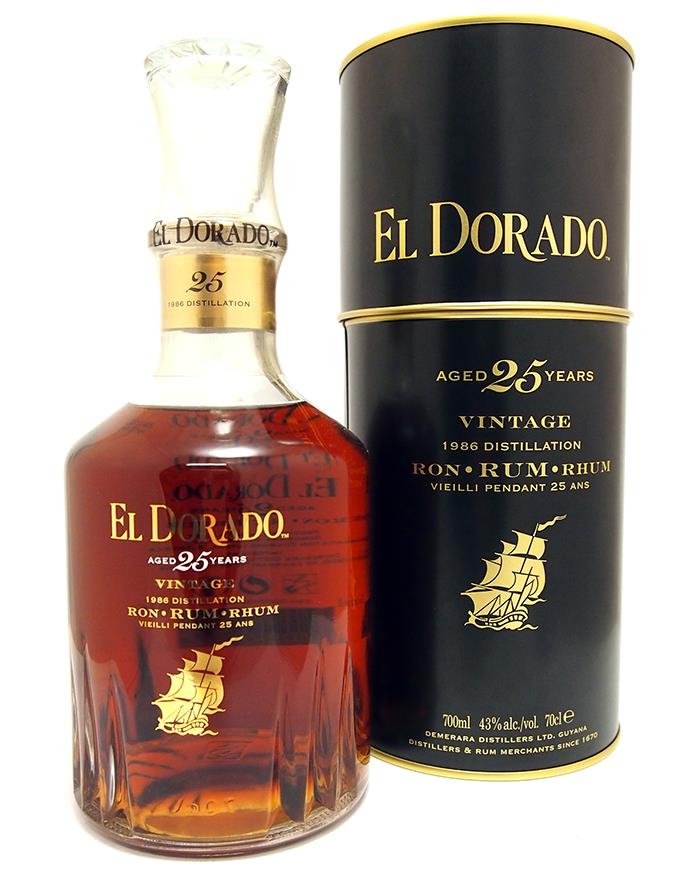 Issued around 2011, the El Dorado 25 YO received an update from the original 1980 version, with the blend tweaked a little. The enclosure and bottle remained the same, however, and unfortunately for the modern rumporn brigade of the millenial teens, not enough was done to upgrade the rum to what a current (2017) connoisseur would consider par for the course – unadulterated and cask strength. Instead, sticking with the tried and true formula which sold so well in the past, it remained 43%, and perhaps we should consider it a favour that the reported 51 g/L sugar of the 1980 version was reduced to 39 g/L here. I suppose that’s why this one scored incrementally better. But still, a 25 year old rum made from some of the most famous stills in the world should be a world beater. And it isn’t. Not even close.

Nose – Marginally better than the 1980 (I tried both side by side). While still too anemic, it was vaguely crispier and fruitier, nuttier and brinier. Bags of anise and dark dried raisins, jam, molasses and caramel, given some edge with notes of tobacco and oak and some minerally ashy background. A very good nose.

Palate – Takes the promise and trashes it…worst part of the experience. This is a €400+ rum, aged 25 years (with all the attendant expectations such stats engender), and a depressingly liqueured might-have-been. If one strains the nose almost out of its original shape, one can sense (rather than actually taste) black cake and honey, vanilla and oak, philly cheese on toast, plus traditional fruits, raisins, anise, prunes, backed up by a nice creme brulee. And to that extent I liked it. But the sugar…it was just too overbearing – it was like you could never quite come to grips with what was on offer, not because of a low ABV (though this did absolutely nothing to enhance the experience) but because the sweet dampened everything. It made for a thick, muddy sort of mangrove swamp, instead of the crisp, complex, fast-flowing river that would have been better.

Finish – Too short, to pale, too sweet. Nothing much going on here.

Thoughts – What the rum provides is still ahead of spiced nonsense like the Kraken or Don Papa, but that’s damning it with faint praise. Those cost 1/10th of this and have fewer pretensions, raise fewer expectations. Seven years ago I enjoyed the 25 YO El Dorados I tried because I knew less and was more satisfied with 40-43% rums. That time has now passed and I can see more failure than achievement here. One of my idols proved to have feet of clay, alas.

Other Rumaniacs liked this rum even less than I did. You can see their evaluations on the official website.