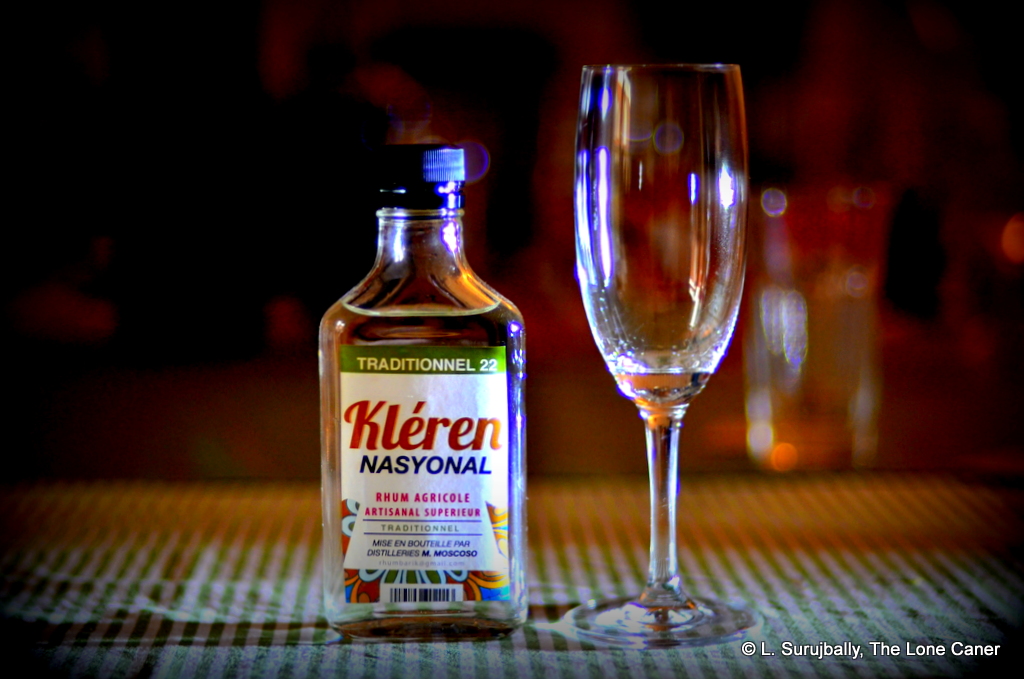 By now, just about everyone in the rum world is aware of clairins, those indigenous crude white taste bombs out of Haiti, and once again, points have to be given to the farsightedness of Luca Gargano, who brought them to the attention of the wider world by promoting and distributing the Sajous, Vaval and the Casimir.  Unfortunately, the acclaim these three have garnered have somewhat eclipsed any other clairins – and when supposedly some 500+ small outfits make the juice on the half-island, one can only imagine what else of interest is lurking there waiting to be discovered by anyone who loves crazy, speaks patois and has a 4×4.

One that came across my radar not too long ago was the Kreyol Kléren series of rums made by a company called Mascoso Distillers, sometimes as Barik – a real company, not some garage-based pop-and-pup moonshinery making it with granny’s recipe for the relatives on the weekend jump-up.  I ended up buying two of them and getting a sample of a third, which caused the customs officials in Frankfurt some real puzzlement as they had no clue what the hell this stuff was and required no end of paperwork from Michael (the owner) to prove that it was a rum, why the price was so low, how come they were all around 55% and no, they weren’t meant to be weaponized.

You can understand their confusion (or trepidation).  The Kléren Nasyonal Traditionnel 22 (a supposed “rhum agricole artisanal superior” based on the label, but not really, since the source is a sugar mash not sugar cane juice, and the label is a graphic design error) had an initial smell that was like inhaling a small fire-breathing sweet-toothed dragon.  It was fierce, herbal and salty, and reminded me somewhat of that long-ago sonofabitch in the playground in second form who rabbit punched me in the schnozz without warning.  I was using all three of the other (Velier-distributed) clairins for controls here, and what I sensed with the Nasyonal was their genesis taking form.  It was not as cultured as the Vaval or the Casimir, and even the Sajous was somewhat more tamed (when was the last time you read that about those three?), but in its very basic and elemental nature lay much of its attraction.  It was rough and jagged and yet still joyously powerful, eventually giving up more leafy notes (basil, maybe), sugar cane sap, with much of the same salty wax and swank taste I remembered so well from the others.

Thankfully the rhum settled itself down some when I was tasting it and now edged closer to the quality of my controls.  Oh sure, it was still liquid sandpaper and not for the weak (or those preferring softer brown fare) – I would never try to convince you otherwise.  Yet behind all that macho display of sweat and stink squirting from every pore was some pretty interesting stuff – sweet sugar water and herbal cane juice again, some gherkins in vinegar, and salt and olive oil and dill backing it all up.  Phenomenal, long finish, by the way, making up some for the brutality of the preceding experience, suggesting salt and herbs and (again) cane juice. Not the most complex drink ever made, of course, and after taking it out back and beating my palate a time or three, it occurred to me to wonder, if Luca had smacked his label on it, would I have been able to tell the difference? (So I had the wife give me all four blind, and I was just able to pinpoint the Sajous and the Klerin but mixed up the Casimir and the Vaval – it was the edge on the first two that gave them away).

Clairins may be made in every bottom-house, backhouse and outhouse on Haiti, where jury rigged creole stills are slapped together from mouldy leather jockstraps, old bata flip-flops and disused petrol cans (probably with duct tape).  And yes, many of them are probably best left undiscovered, or relegated to those with noses, palates and livers more robust than mine.  This one, the least of the three I’m going through, possesses enough points of distinction to merit a recommendation, so long as your tastes run in this direction.  It’s a massive, Duke Nukem style hot shock to the system, displaying zero couth yet uncompromisingly boasting a uniqueness worthy of note.  I can’t entirely or unreservedly praise the rhum, but it must be said, when I was trying it, I sure as hell wasn’t bored. I doubt you would be either, no matter how your experience turns out.