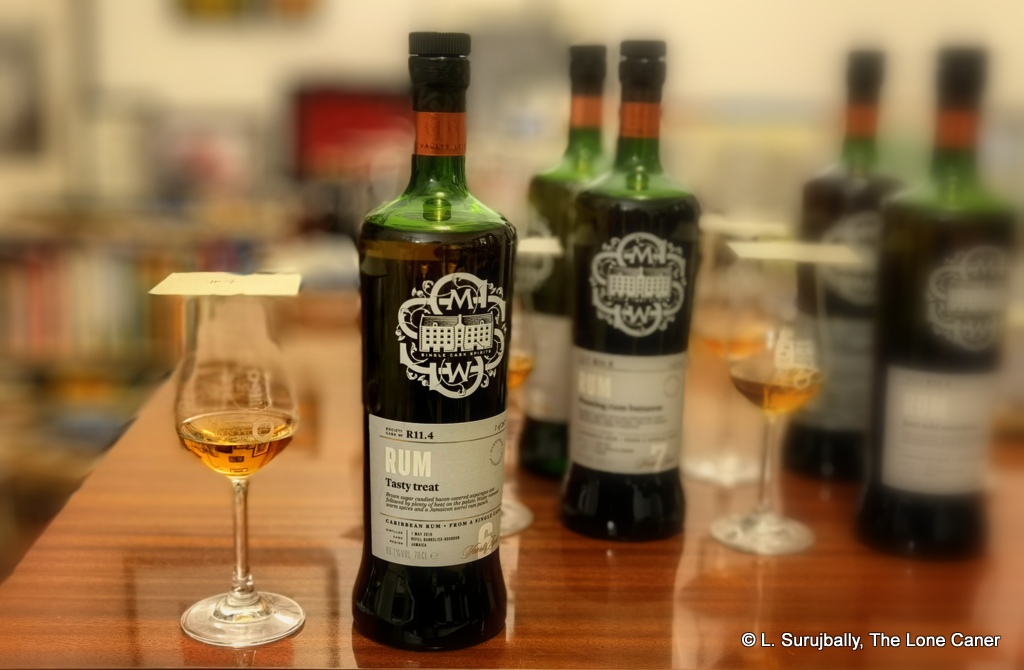 The Scotch Malt Whisky Society is the largest subscription-based spirits distributor in the world, focussing primarily on whisky but also blends, bourbons, gins, cognacs and, yes, occasionally rums. It has long passed the stage of simply buying a cask here or there and releasing the subsequent bottling, but is a noted stockist and ageing warehouse in its own right, purchasing new make spirit from all over the map and barrelling it themselves. Their prime focus remains the whisky arena, no matter what sort of minor releases they do in other areas of the spirit world, which I guess is understandable given their historical mandate and membership.

That said, 2017 was a relatively good rum year for the SMWS, because that was the year that the most rums were ever issued since they first got the slightest bit serious about them (in 2011): eighteen in all, of which seven were from a single distillery – Worthy Park 1. All but one of the WP Seven derived from a series of casks laid down in 2010 and somehow most of these have made it over into my stash, which does nothing to allay Mrs. Caner’s suspicions as to how much money I spend on rums (not much, honey, honest!).

So today, we’ll be looking at R11.4, a 66.1% ABV beefcake coming off a pot still, aged six years in Europe and with an outturn of 267 bottles. I’d write a longer introduction and throw in a few other observations, but really, with both the society and the distillery being known so well, it’s hardly required nowadays. 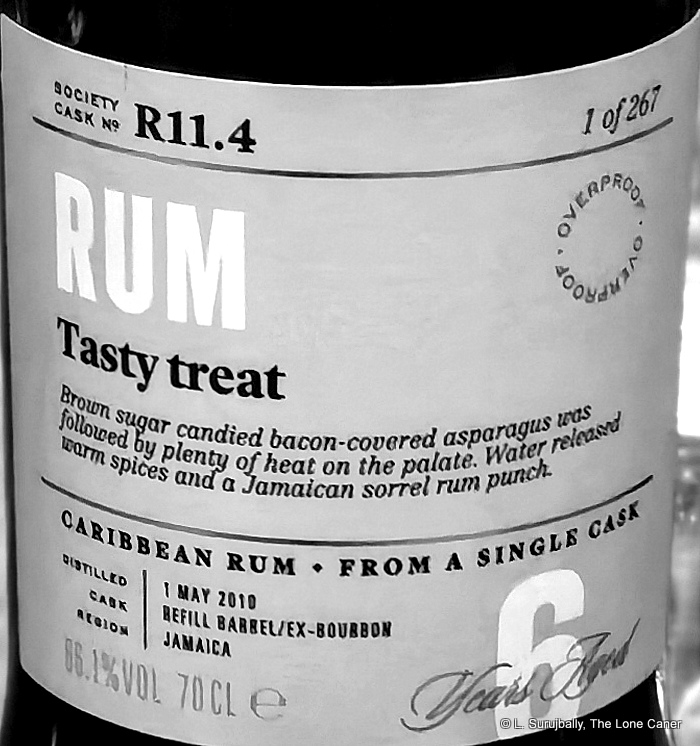 The rum is given the usual unique Society title, which this time is actually less obscure than most: it’s called the “Tasty Treat” — though that might be stretching things (especially for those new to the rum scene). The nose, for example, instantly reminds one of the insides of a pair of sweat-infused rubber boots after a hot day spent tramping through a muddy field of freshly turned sod, before it relaxes and grudgingly provides notes of sweet acetones, nail polish and turpentine (just a bit). And if you think that’s odd, wait a while: you’ll be greeted by brine, olives, cucumbers in light vinegar paired with sashimi in pimento-infused lemon juice (I kid you not). By the time you recover, all that’s gone and all that’s left is sharp, tartly ripe fruits: apples, pears, apricots, pineapples. And a touch of orange peel.

The palate is quite hot, as can be expected from something with such a high proof point; however, letting it breathe for a few minutes so it opens up and lets the sharper alcohol fumes dissipate, mitigates that heat, and a rum of rather well balanced flavours emerge out of the chaos. The segue from the nose is seamless: first the spicy, tart, fruity notes – pineapples, pears, strawberries, cherries, yellow mangoes – followed by milder, more mellow tastes. These are flambeed bananas, caramel, honey, almonds, walnuts, unsweetened yoghurt, vanilla, and hot black tea infused with just a touch of cinnamon and cardamom. I particularly enjoyed how it finished, long and dry, with all flavours coming onstage for a final curtain call. Nothing new at the close, nothing original, just a succinct summation of the whole experience in a languorous fade.

The odd thing about this rum is that good as it is, strong as it is, it’s missing something of the overall punch and uniqueness of some of the earlier R11.x series, let alone Worthy Park’s own rums which I had on hand as comparators. It’s tasty and complex enough, yet lacks the voluptuousness of the juice WP puts out the door in its estate bottlings, and jumps around the flavour wheel without the structure of R11.2 or the excellent R11.3. Maybe that’s a factor of the European ageing, maybe it’s the single barrel, maybe it’s just a different palate, maybe it’s the relative youth. It’s just not quite … there. And so, much as I like it, I can’t quite elevate it to the status of a must-have that had to be acquired by fair means or foul: because while it’s tasty enough, it’s not quite a treat.