Anyone from my generation who grew up in the West Indies knows of the scalpel-sharp satirical play “Smile Orange,” written by that great Jamaican playwright, Trevor Rhone, and made into an equally funny film of the same name in 1976.  It is quite literally one of the most hilarious theatre experiences of my life, though perhaps an islander might take more away from it than an expat. Why do I mention this irrelevancy?  Because I was watching the YouTube video of the film that day in Berlin when I was sampling the Worthy Park series R 11.3, and though the film has not aged as well as the play, the conjoined experience brought to mind all the belly-jiggling reasons I so loved it, and Worthy Park’s rums.

You see, Hampden catches a lot of kudos and eyeballs and attention these days – their publicity blitz for the last few years is second to none, and they are rightfully renowned for the quality of their pot still rums issued with and by Velier, the ones that fans collect with a sort of obsessive good cheer which perhaps Ringo Smith might admire (and plan a long con around). But this leaves the other New Jamaican distillery of Worthy Park and its own pot stills seeming to pick up footprints, when in fact its rums are equally good, just different. Their confidence is, in my opinion, not at all misplaced, since the SMWS R11.3 — fragrantly named “Crème Brûlée Flambé” — is the best of those first three WP rums (I own but haven’t tried the second trio so far).

Consider how it opened, with a nose of pencil shavings, sawdust and wood chips in a sawmill, glue and bright sweet-sour acetones that made me look rather amusedly at the bottle to confirm it wasn’t an R2.x series Enmore or something. It developed real well from there: honey, cardamom, cloves and ginger to start, followed by a wave of tart fleshy pears and apricots.  There was a nice hint of avocados and salt and citrus juice, and when I let it stand for ten minutes (was watching the waiter training scene), I got last and light aromas of salt caramel ice cream, chocolate chip cookie, and butterscotch bon bons.

I remarked on the R 11.1 and R 11.2 that they were young and somewhat raw at times, not entirely cohesive, and Simon Johnson in his review of the R 11.2 also noted they lacked a certain elegance which the aged blends released by WP themselves displayed.  This was not an issue here at all – the palate was more approachable and rounded than its two predecessors – lots of both tart and ripe fruits, plus citrus, mint, salt caramel, rye bread, cream cheese and flowers in a good combination.  The taste is not quite as complex as the nose had been but it was close – at any rate it was both meatier and slightly thicker and sweeter than those, and for once, I think the SMWS had the title of the thing exactly right.  Finish was long, flavourful and zesty, mostly flowers, honey, fresh baked cheesecake, caramel, and some dry dusty notes of jute rice bags. 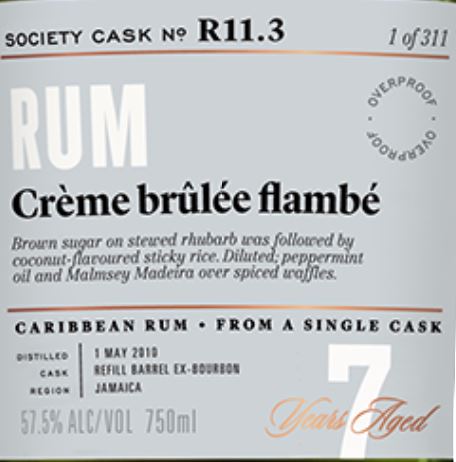 The distillation run from 2010 must have been a good year for Worthy Park, because the SMWS bought no fewer than seven separate casks from then to flesh out its R11 series of rums (R11.1 through R11.6 were distilled May 1st of that year, with R11.7 in September, and all were released in 2017).  After that, I guess the Society felt its job was done for a while and pulled in its horns, releasing nothing in 2018 from WP, and only one more — R11.8 — the following year; they called it “Big and Bountiful” though it’s unclear whether this refers to Jamaican feminine pulchritude or Jamaican rums.

Anyway, this is a rum that matches its siblings and goes a step beyond them. “Grace under pressure under a hot sun” wrote Richard Eder of the New York Times about the film “Smile Orange” in 1976, describing Ringo’s equanimity towards his travails.  The way the R11.3 cheerfully unfolds, without hurry, without bombast, taking its weaknesses and strengths in stride, suggests that the phrase could equally apply to the rum. After all, the best rums aren’t only the ones that are well made and taste good, but those which enrich and enhance life experiences, call back great memories of times gone by, allow you to skate past the problems and vicissitudes of reality. My experience and enjoyment the day I drank this rum, completely proved that point.