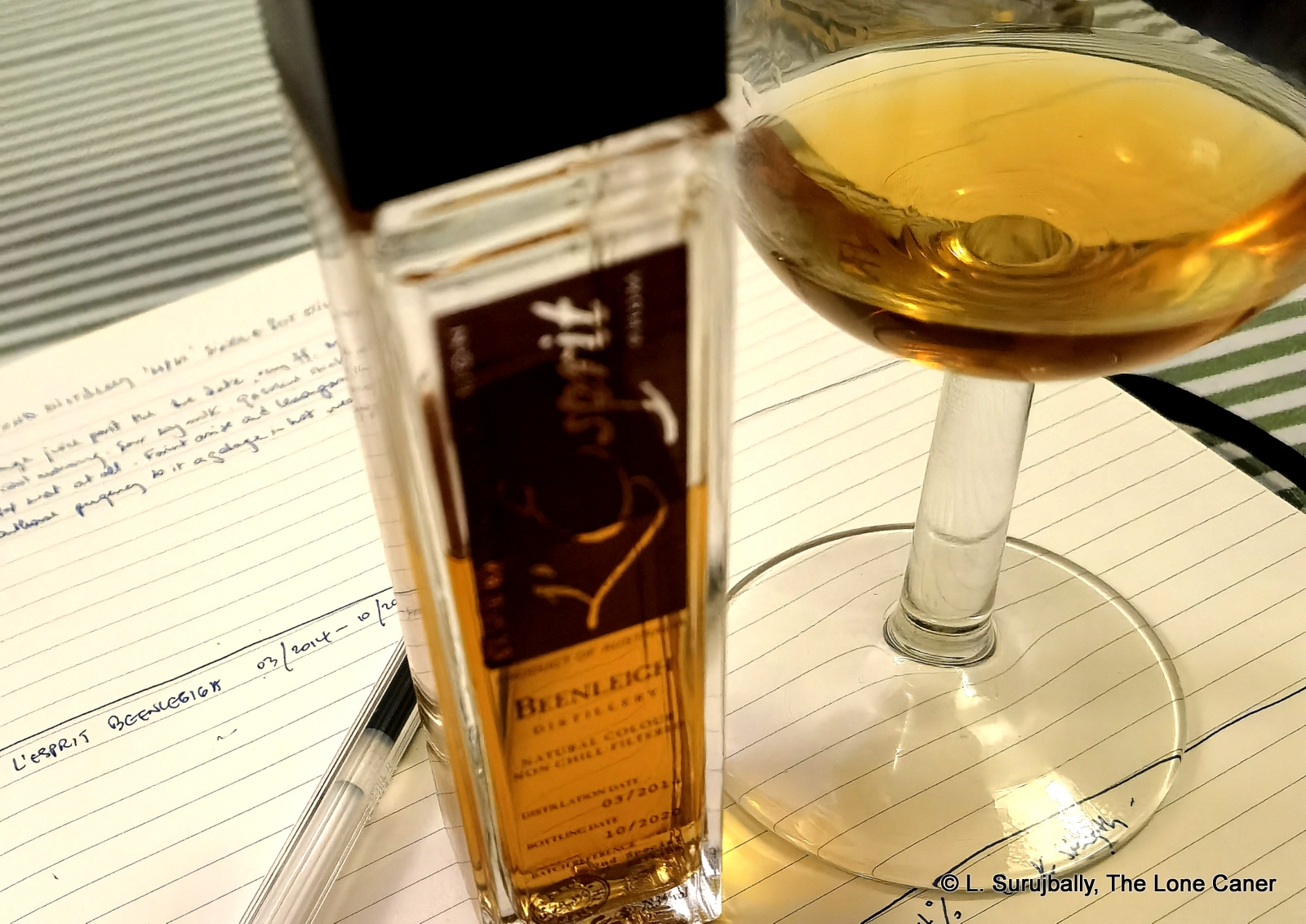 Two years ago I took a look at L’Esprit’s Beenleigh 5YO rum from Australia and after trying manfully to come to grips with the gasp-inducing strength of 78.1%, I got up off the floor and wrote a fairly positive review about the thing. That rum was hot-snot aggressive and not bad at all, and there I thought the tale had ended…but then came this one. And then it became clear that Steve Magarry (who was then Distillery Manager over at Beenleigh) and Tristan Prodhomme (the showrunner at L’Esprit) read my review, rubbed their hands gleefully while cackling in fiendish delight, and released something a little older, a little stronger…and a whole lot better.

The 2014 rum which was bottled in 2020, has 0.2% more proof points than the one I reviewed, clocking in at 78.3%, and it’s one year older. It remains a pot-still rum, suggesting a lurking taste bomb in waiting. On the face of it, the stats would make you take a step backwards (unless you’re the sort of person who methodically works your way through the list of 21 Strongest Rums in the World, smiling the entire time). And taking even a cautiously tiny sniff is probably best here, because the rum is lava-like, the rum is sharp, and it presents itself to your attention with all the excitement of a switched-on electric hair dryer dropped into your hot tub…while you’re in it. 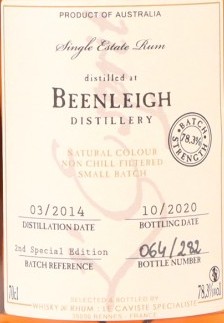 The first notes to discern are ostensibly off-putting: shards of burnt rubber, rotten carrots. plus meat spoiled enough for flies to be using it for a house. Stick with it: it gets better fast once it learns to relax, and then coughs up vanilla, almonds, toffee, brown sugar, and ice cream over which has been drizzled hot caramel. Relatively simple, yes, and it seems quite standard (except for that startling cold-open), yet somehow the nose is really quite amazing. It continues into sweet dense fruit and whipped cream over a rich cheesecake, plus leather and aromatic tobacco, cherries and syrup, and that crisp sensation of biting into a stick of celery. It works, swimmingly, even though logic and the reading of such disparate tasting notes suggests it really shouldn’t.

Nosing is one thing, but rums live or die on the taste, because you can jerk your scorched nose away a lot easier than a burnt and despoiled tongue. What’s surprising about L’Esprit’s Beenleigh is that it actually plays much softer on the palate than we have any right to expect. There’s almost a light perfumed sweetness to it, like strawberry candy floss and bubble gum, mixed up with more salted caramel ice cream….and mango shavings. There’s gelato, pears, apricots over which someone poured condensed milk, and it’s really spicy, yes….but completely bearable — I would not throw this thing out of bed. Plus, it channeled enough fruitiness – orange marmalade, butter chocolates and gooseberries – to provide an interesting counterpoint. And I also liked the finish – it was hot and sweet black tea, crisply and sharply heavy, and fruitily tart, and slightly bitter in a way that wasn’t really unpleasant, just lent a distinctive accent to the close.

By now we know more about Beenleigh (see other notes, below) than we did before the pandemic, much of it due to the increasing raft of independent bottlers who have put their juice through the door (including Velier, of late – Ralfy loved their 2015 5 YO), as well as the social media presence and engagement of Steve Magarry himself. What was once a distillery known mostly to Australians, uber-geeks and obscure reviewers, has, in a remarkably short period of time, become quite celebrated for the quality of its rum. Like Bundaberg, it has started to become an icon of the antipodean rum scene, while tasting better.

A whole lot better. This is an impressively civilized overproof rum It hums along like a beefed-up garage-tuned homemade supercar fuelled with the contents of whatever’s brewing in grandma’s bathtub, and by some subtle alchemy of selection and ageing, becomes quietly amazing. Really. I expected rougher and nastier and uglier, feared Azog, and yet to my surprise, somehow got Legolas.