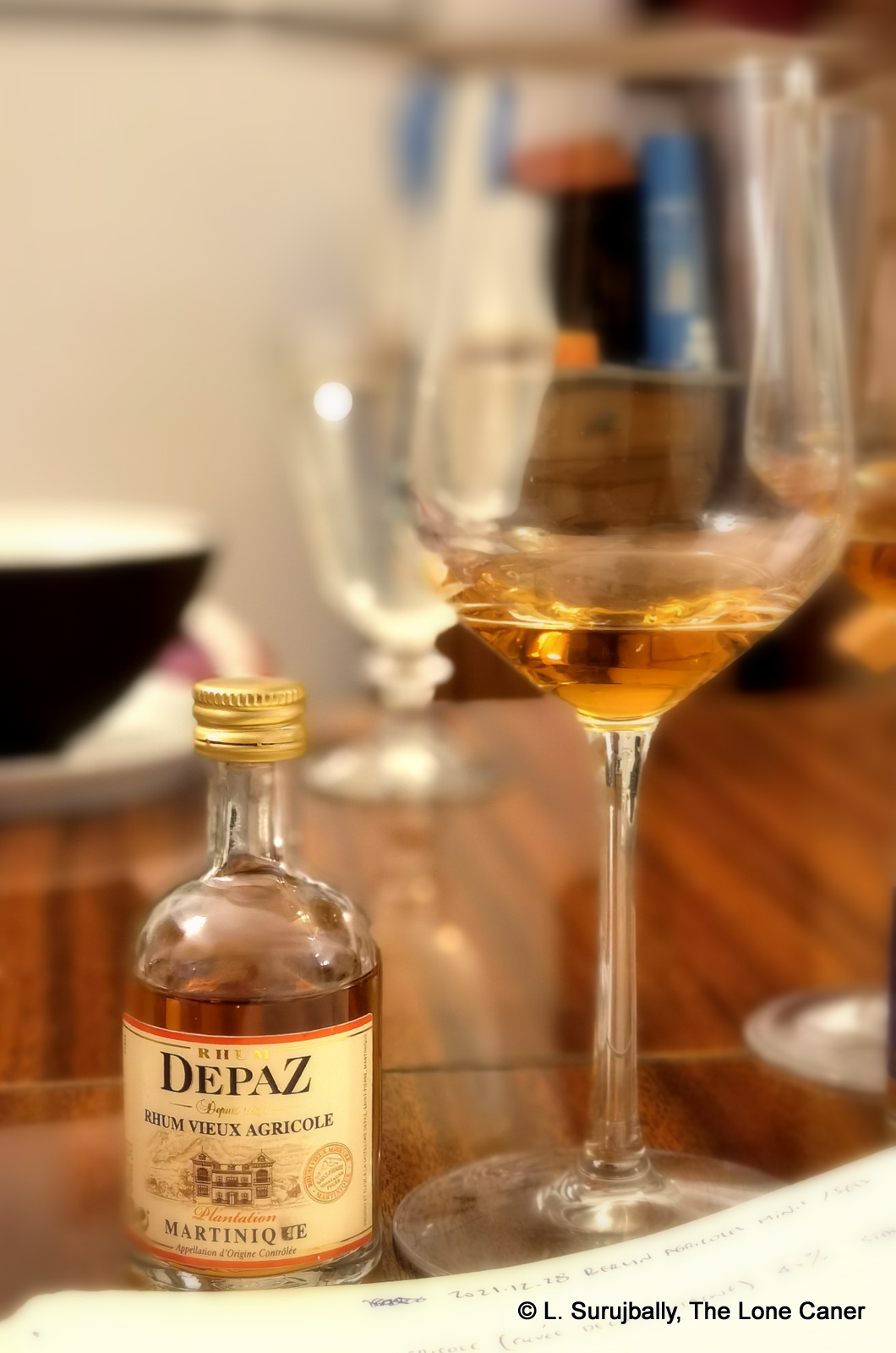 Rum and rhum aficionados are no strangers to Depaz, the distillery on Martinique now owned by Bardinet-La Martiniquaise. The sugar factory and (later) distillery had once been a family operation — the Depaz family from Livorno in Italy had been part of Martinique society since the 1700s — and was in existence even before its destruction by the eruption of Mt. Pelee in 1902. The estate’s modern history can truly be said to have begun with the reconstruction of the distillery in 1917; their immediate success at rum-making could be inferred from their winning of medals at the Marseille expos of 1922, 1927 and 1931, at a time when French island rhums were hardly very well known (even Bally only started making the good stuff around 1924). In 1989 the head of the family at the time, André Depaz, allowed a long time customer and distributor, the Bardinet Group, to take over Depaz, and in 1993 La Martiniquaise, another major spirits conglomerate who already owned Dillon, bought a controlling interest in Bardinet, and so remains the current owner.

The technical specs for this rhum are quite normal: cane juice source, column still distillate, a blend of rhums aged three years or more, 45%. Although these core stats have changed very little over the decades, I have to be honest and admit I’d be interested to see what some 1960s or 1940s versions taste like and how they compare (like Olivier did, here). Because there’s little to find fault with in this rhum. It presents an opening nose that is very nice, almost delicate, redolent of vanilla, flowers, white fruit plus watermelon and cane juice and sugar water. The almost quintessential agricole profile, yet even the relatively brief ageing period allows deeper notes ot be discerned — caramel, peaches, peas, brown sugar, that kind of thing. Stays light and clean, adding some saline and bananas at the back end. 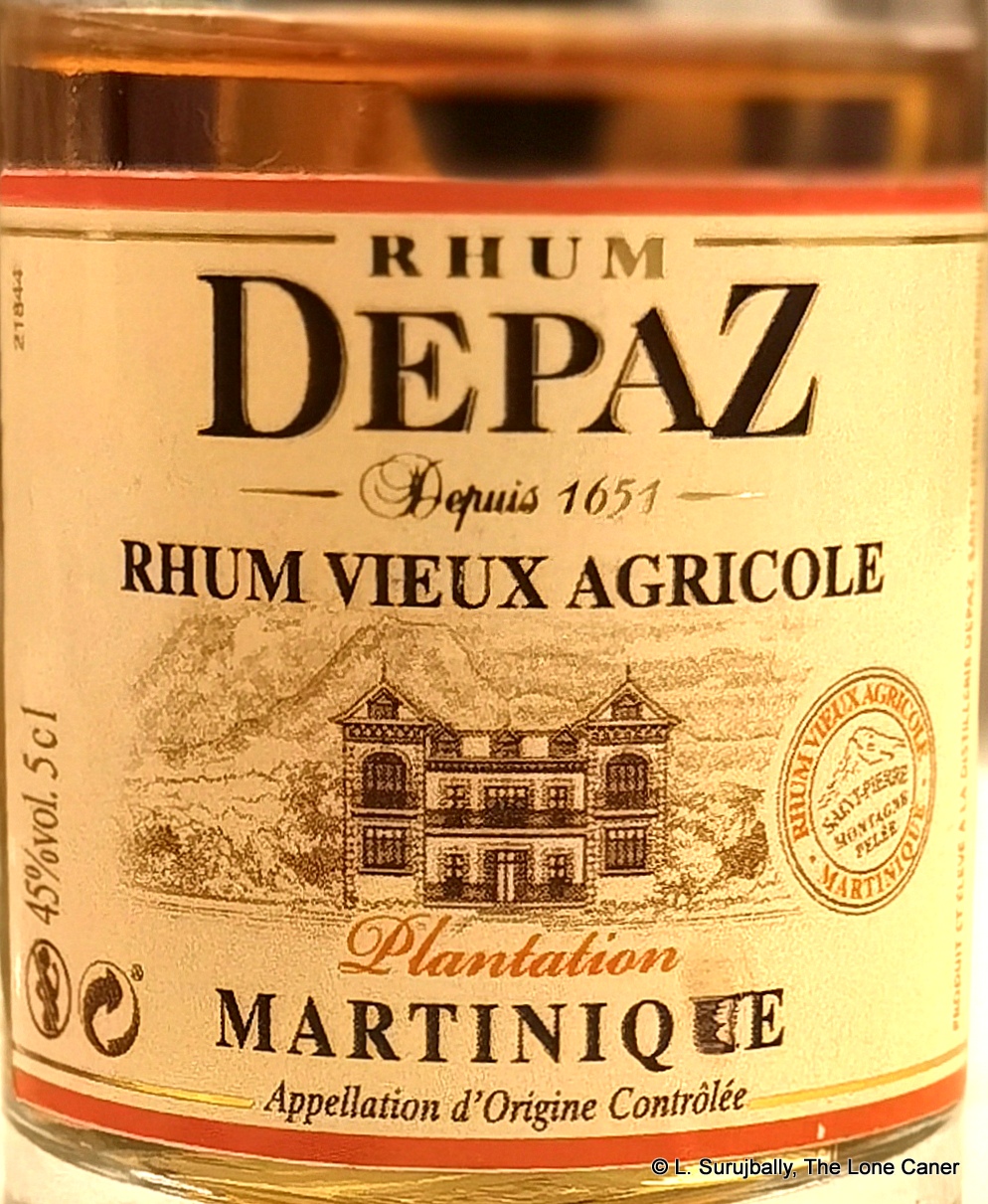 That’s quite an intro from a rhum positioned as entry level, not costing too much, and quite young. Admittedly, the palate is not quite up to that level, but it’s not too shabby either: it presents a bit rough and sharp and spicy at the beginning, until it settles down, and then it becomes softer and warmer, like a scratchy old blanket you use on the sofa while watching TV. Sweet caramel, coconut shavings, vanilla, sugar cane juice, pears, apples, very ripe cherries and black grapes, are all noticeable right bout of the gate. The edges have not been entirely rounded off with some further ageing or blending, so much of the young and frisky nature of the rhum comes through, like a half-grown long-haired mutt that hasn’t quite adjusted to its strength. The finish is sharpish, medium long, mostly sugar water, citrus, herbs, toffee, some fruits and a light hint of lemon grass.

Depaz’s rhums have always been available in France, but there were few reviews around even from the old stalwarts of the online reviewing ecosystem from that country, perhaps because people tended to go for the more upscale editions like the distillery’s millesimes and indie bottlings rather than the “standard” line which this is — yet for the budget-minded cognoscenti, Depaz’s starters of the blanc, the XO and the Vieux are actually really quite good and shouldn’t be dismissed out of hand. Fortunately, even for those who don’t want to spring for the full 700ml, gift sets in smaller sizes are available for the penny pinchers among us, such as the one I bought.

And I’m wondering if I shouldn’t have dropped a bit more coin on the whole bottle, because overall, although I feel it’s a rum better served in a Ti punch than on its own, it isn’t so bad that it can’t be had neat. It’s subtle and more complex than it appears at first sight, moves at an angle to the full-out grassy-herbal profile of a recognizable agricole, yet succeeds remarkably well – it explains why the aged offerings are so highly regarded and sought after, because if something this young can be made so well and taste so good, then what must they be like? To some extent, trying this rum is an affordable answer to that question.