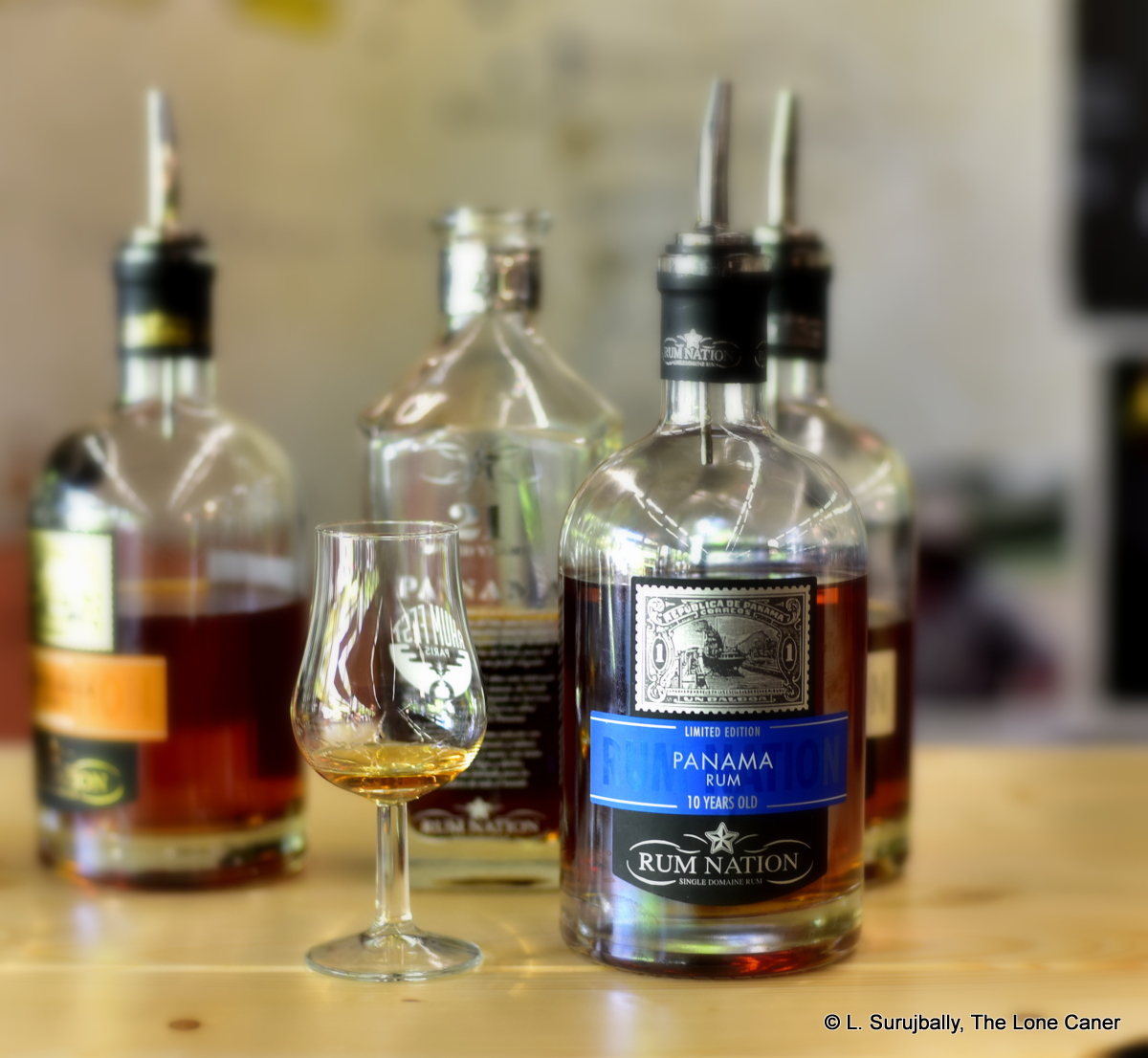 It’s easy to sneer at standard strength rums in a time of sullen cask-strength hoods issued north of 60%, 70% or even 80%. Those have tastes that attack and maul your extremities, aromas that lunge into your nose with intent to maim, and profiles that burst at the seams with all sorts of…well, something. Badassery, maybe. In contrast, forty-percenters are considered meek and mild, barely sniffable, weak, easy and not altogether “serious”. Best leave them to the Spanish style roneros. They can have ‘em – here we deal in proof, pard. 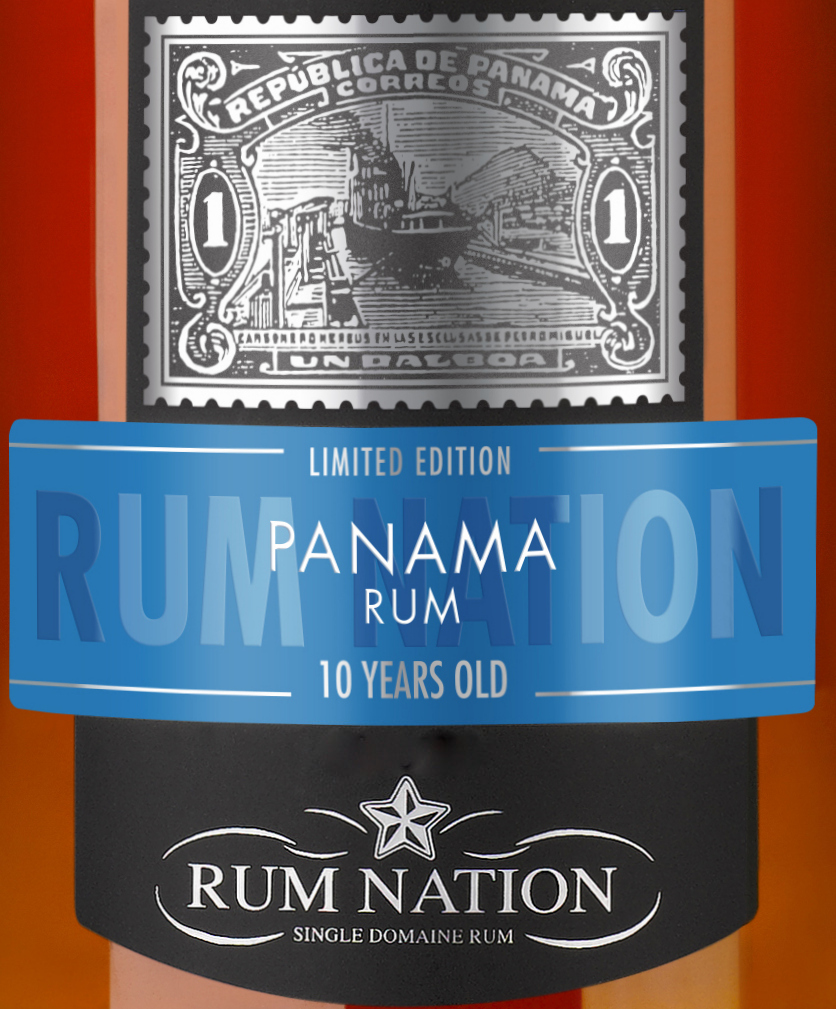 Rather than simply issuing such soft multi-country blends, Rum Nation takes a different approach to standard strength rums – they merely consider them as entry level rums, made for the audience that wants something better than merely another Bacardi wannabe, but doesn’t appreciate some rude over-muscled Trenchtown brawler invading the living room. So a number of their lower cost rums from around the Caribbean continue to be released at that strength and are a complement to their more exclusive, up-market Rare Cask editions.

One of these is the Panama ten year old limited edition from the 2018 season (it had been introduced the year before – this is the second iteration). The bottle’s presentational and informational ethic is something of a victory of style over substance, because pretty as it is, we don’t actually get much data: it tells us Panama, 40% ABV, 10 YO and 2018 release on the front and back labels, and that’s it. Everything else is fluff, and given what fans of today almost demand on their labels, it’s an odd omission to leave out the distillery of make or the still type. Based on past experience with Rum Nation, I’d suggest they continue to source distillate from Varela Hermanos (home of the Abuelo brand), and given it’s from Panama the likelihood of it being a column still product is high. Aged in ex-bourbon barrels, diluted to forty, and there you are. We’re still in the dark as to what “limited” means, though — how many barrels are involved and what the outturn is, remain unknowns.

I’ve made no secret of my initial liking for Panamanians a decade back and how I gradually fell away from their soothing, silky style. That’s not to say they do not remain approachable, and very likeable: they are, and remain so. Here for example, the nose was light, clean and smooth, medium sweet, redolent of vague florals and bubble gum. Some fruits, caramel, raisins, vanilla, and a touch of molasses and toffee, nicely blended, but not standing out in any way. 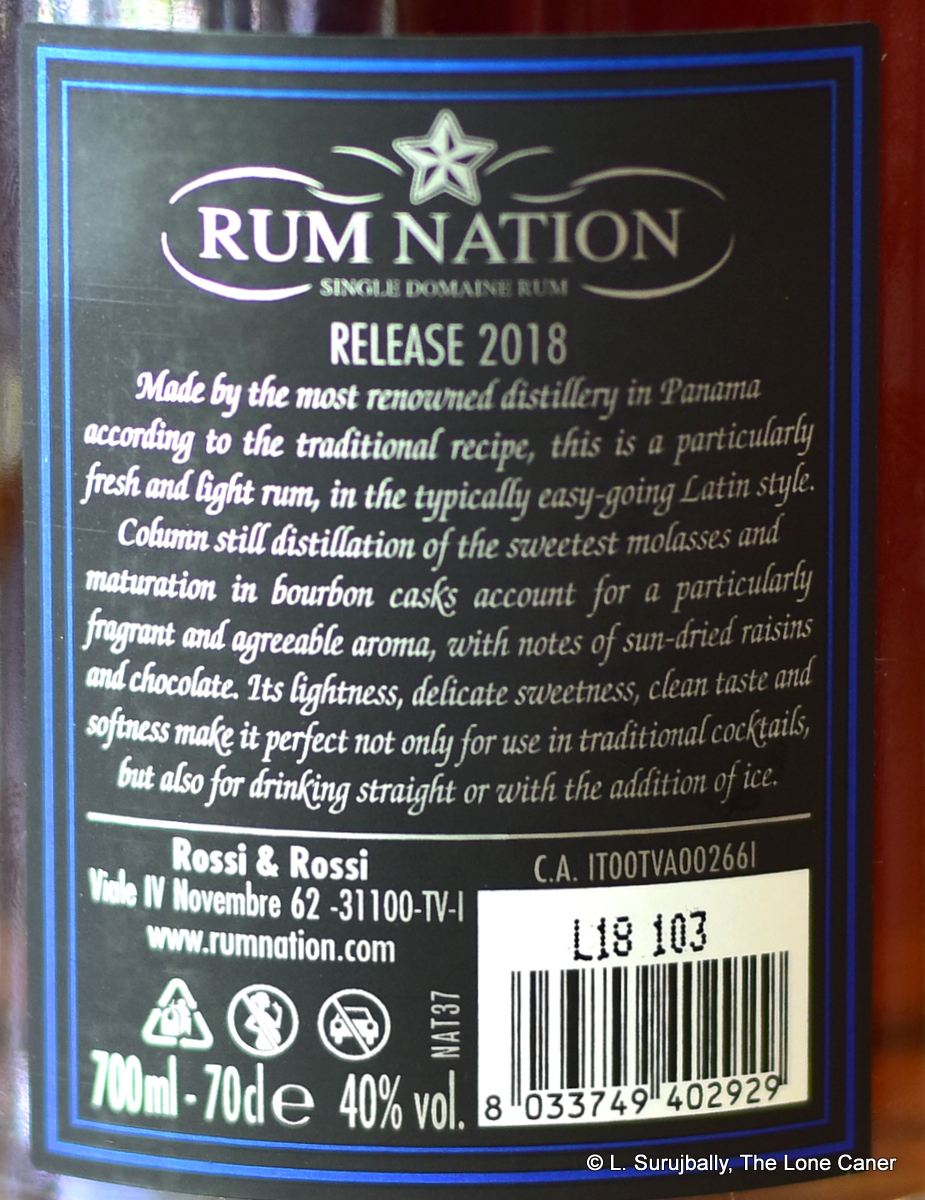 The palate continued in that vein of niceness and weakly indeterminate everything-is-in-here tastes. It was sweet, and one can taste caramel, vanilla, flowers, bubble gum, and even sour cream. Also molasses, toffee and the damped down taste of soft bananas, dates, and a plum or two, leading to a short and meek finish which does not exit with a statement or exclamation point of any kind, just kind of sighs and walks off the stage.

This is my issue with Forties generally and to some extent rons in particular. Because they are made on an industrial multi-column still more often than not, and exit the still at a very high ABV, too many congeners and esters are stripped away. Therefore the relatively neutral starting profile off the still can only be enhanced by long ageing, good barrel management, secondary cask maturation / finishes…or additives. Here, I was told that 18 g/L of sugar was added, which explains a lot.

So for me, right now, it’s too faint, a touch too sweet and too mildly inoffensive. It lacks distinctiveness of any kind and is easily forgettable. It’s a good enough rum to drink when no thought is required (and the brief one-line tasting notes on rumratings show others have a similar experience), although with its added extras and weak-kneed pusillanimity, I don’t think I’d drink it much unless it was my intention to just have a tot of anything passable in the glass. There’s little beyond “nice” that you can use to describe it, yet it’s important to understand that if you think this way, the rum is not meant for you. It’s a decent enough rum made for those at this stage of their rum journey, and on that basis, Rum Nation really did provide all the info needed for such persons to chose it.