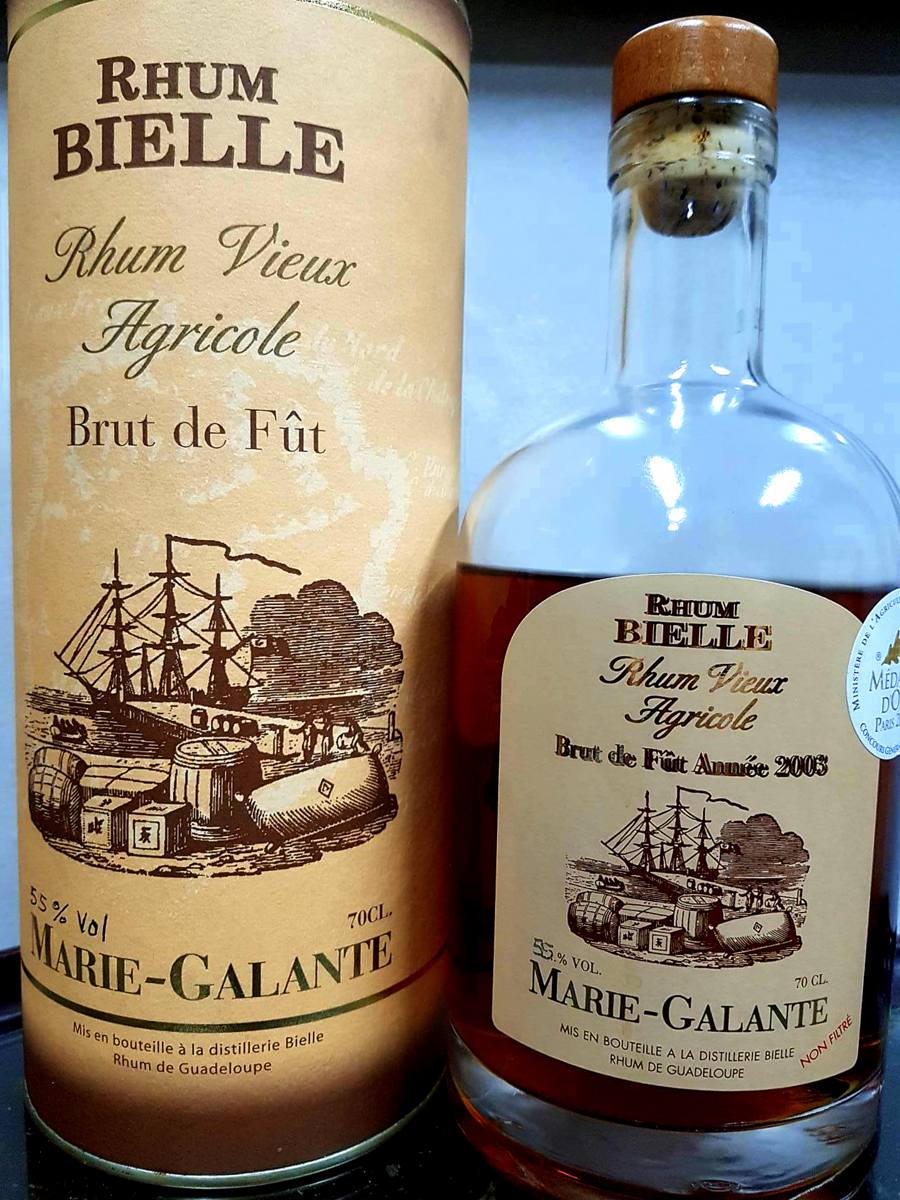 2003 was clearly a good year for the small Marie Galante distillery of Bielle, since there are several different editions of that year’s rhums on the market: a Hors d’Age 52.9%, a Vieux 9 YO at 49%, a Millésime 2003 Brut de Fût 8YO at 52.8% and yet another special release at 53.1%.  Varying ages and strengths, but one doesn’t release that many iterations of a single year without some sort of belief in the underlying quality of the distillate made in that year.

Taking this version out for a spin demonstrates that that belief is not mere wishful thinking or misguided optimism. It’s really quite interesting: for example, wood, paint, glue and sawdust start the ball rolling, with a certain hogo-y sourness of spoiled fruit. This is fades away in almost no time, leaving honey, cheerios, cereals, salt caramel and vanilla in an uncertain truce with the opening aromas. It does develop nicely from there, becoming surprisingly complex with additional fruits and citrus and cinnamon, while retaining the characteristic clarity and cleanliness of agricoles.  And then, as if bored, it adds a queer ashy, metallic, medicinal filip to the back end which is truly unusual – I went back through all my previous Bielle reviews and found nothing quite like it.

Taste-wise it continues that above average quality and parallels the nose almost exactly: it’s hotter than expected (but okay, 55% is not exactly tame), and again, here, the paint thinner, fresh-sawn planks and varnish lead the way: it’s almost like walking through Home Depot’s lumber section. This is followed by  cereal, caramel and vanilla, with fruits apparently taking a vacation at this point, because the impression it laves is one of caramel-toffee saltiness rather than crisp fruity acid-sweetness.  There’s some watermelon and light pears coiling around the background, but that’s about it. Oh, and the finish is excellent: long, dry, almost smoky, a hint of ash and iodine, and then a faint recap of the slightly sour fruits mixed in with caramel and cinnamon…plus what sure seemed like maple syrup, but that may be reaching.

The distillery: located just south of dead centre on the tiny island of Marie Galante (itself south of Guadeloupe), Bielle is a small sugar plantation dating back to the late 1700s, named after Jean-Pierre Bielle (he also owned a coffee shop), which went through a series of owners and went belly-up in the 1930s; the property was sold to a local landowner, Paul Rameaux, who had no more success than his predecessors in reviving its fortunes. 1975 marked a revival of Bielle when la Société d’Exploitation de la Distillerie Bielle (SEDB) took over the assets, and nowadays a nephew of Mr. Rameaux, Dominique Thiery, runs the distillery. As recently as six years ago it was another small outfit from the French West Indies about whom only the local islanders, rum deep divers and the French seemed to know very much … but my experience with their output (and not just Capovilla’s) over the years suggests they really know what they’re doing.

Still, back to the rhum: I’m not entirely sure how old it is: there’s no mention on the label or the box and other 2003 vintages are a rough guide at best; and no online resources I’ve found make any age statement. My guesstimate is about 6-8 years, (if it was double digits it would likely be much more expensive). It’s a cane-juice derived agricole, column still produced, and a really good all round rhum for any purpose. I particularly enjoyed its departure from the norms usually exhibited by cane juice rhums – not much herbals or clean green grass here, just real complexity, solid assembly and a construction that allows each note its individuality. These days I think it’s more likely to be found at auction or in a private sale than on a store shelf, but however it crosses your path, if you find a bottle at a decent price, you wouldn’t be losing out.