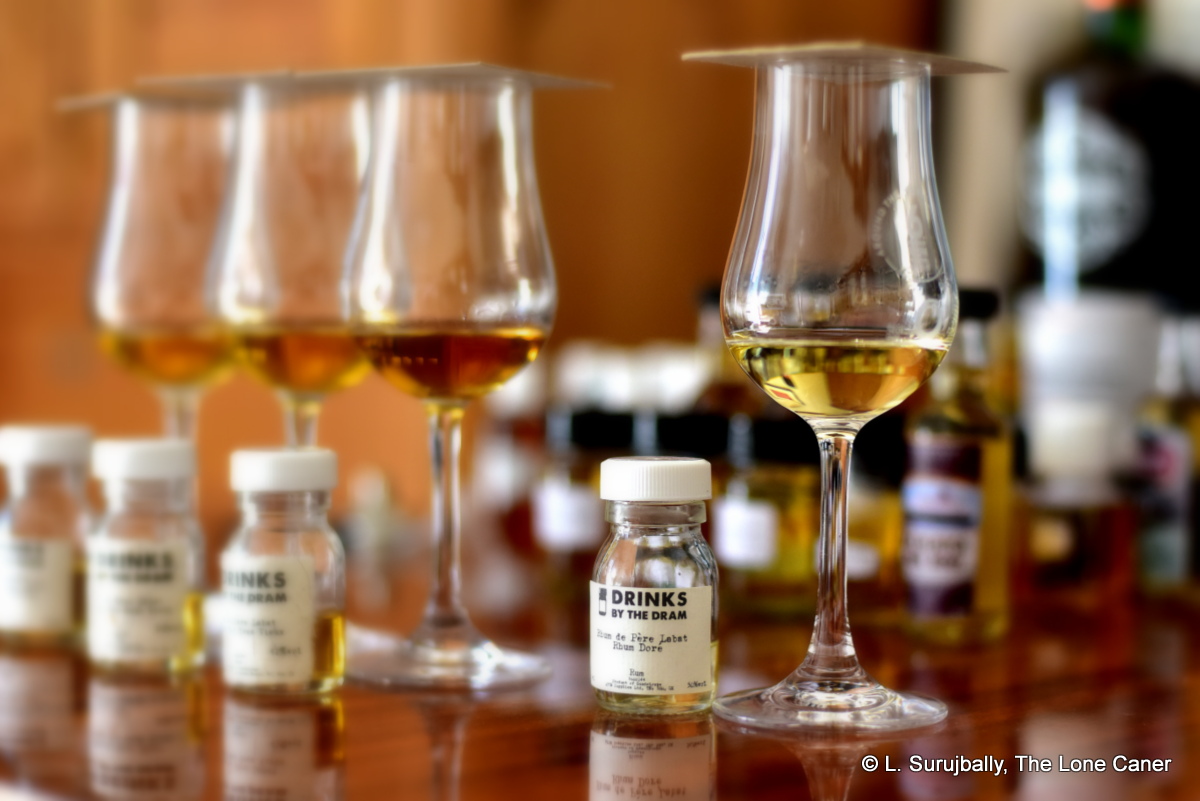 Having gone through their aged expressions, millesimes, and young blends from the Poisson-Pere Labat distillery on Marie Galante over the last few years, it is my considered opinion that when it comes to the best intersection of value for money, the surprise standout is not either the 3 year old or the 8 year old (which, since they sit smack in the middle tend to be shoo-ins for the honours of this series), or any of the more upscale millesimes (though those are quite good) but the rather unremarked and seemingly unremarkable two year old called the Doré, which I can only assume means “golden” in French. Certainly its light golden colour explains the name, though one could equally wonder why they didn’t just call it an Ambré, as most others do.

Rhums with names, that are not “premium” – by which I mean “highly priced” in this context – tend to be blends which stay constant for extended periods. The Doré is considered one of the youthful “Elevés sous bois” (‘aged in wood’) series of rums from Poisson, accompanied by the “Soleil” (Sun) 59º and 55º both of which are aged for six months: they are all supposedly a rung underneath the quality ladder of the 3 YO and 8 YO, and the millesimes and premium editions above that.

But I disagree, and think it is something of an unappreciated little gem that defines Poisson and Marie Galante — as well as Bielle or Capovilla or Bellevue, the other distilleries on the island. Let me walk you through the tasting of the rhum, to explain.

The nose, to put it simply, was just plain lovely. It was crisp, creamy and citrusy, like a well made lemon meringue pie fresh out of the oven. It smelled of ripe peaches, yoghurt, ripe Thai mangoes, red grapefruit and oranges, and the acidic, tart elements were nicely balanced off by softer, more earthy tones. Even for a rhum whose youngest components were 18 months old, there was no harsh stinging notes, no roughness or jagged edges flaying the inside of one’s nose. In fact, the whole experience suggested a rhum much lighter than the 50% it was actually bottled at.

The taste was reminiscent of that dry, crisp Riesling I remarked on with the 8 YO. That one was gentler and smoother as a consequence of the 42% strength. Here this was transmuted into firmness, a certain tough clarity, and made the wine feel jacked up and boosted (but in a good way). It was a veritable fruit smorgasbord – apples, pears, cashews, guavas, star-apple, passion fruit, peaches all tramped across the stage at one point or another. And then there was the herbal grassiness of citrus peel, green grass after a rain on a hot day, cinnamon, a trace of coffee and bitter chocolate…I mean, what on earth gives a two year old rum the right to taste this fine? Even the finish didn’t drop the ball – it was long, fruity, and brought everything to a fitting conclusion of crushed walnuts and almonds, lemon zest, ripe fruits and even that pie we smelled at the inception made a small bow.

I don’t know about you, but I felt this rum to be a quiet little stunner and it remains one of those favourites of mine that stays in the memory and keeps being bought, in a way its cheaper and more expensive cousins up and down the line do not. It samples really well, has a good proof point for what it is, and while it is understood that it’s is made to be a mixing drink, I feel it transcends such workmanlike blue-collar origins and somehow excels at being a downright tasty sipping drink also. And it’s nicely affordable as well being in the less-than-premium segment of Poisson-Labat’s range

What it doesn’t have, is widespread acknowledgement, or awareness by the larger rum-drinking public. It’s crowded out by more popular and better known distilleries like Bielle, Damoiseau, Saint James, Neisson, Bally, and is perhaps perceived to be on the level of the smaller and equally little-known outfits like Bologne, Severin or Montebello.

In a recent interview on the subject of Key Rums, I remarked that that when it comes to a large country with lots of distilleries, how does one pick just one? Admittedly, Marie Galante has only four (a far cry from the 500 or so in Haiti or the thousands in Brazil), but when it is lumped together with those of Guadeloupe, the problem remains…which one to chose? The smallness of some of these distilleries makes their rhums fail the criterion of being known, talked about and coming up in the literature. It’s particularly problematic considering that for too much of the rum drinking world, agricoles barely register at all, let alone get seriously discussed. I submit that this is a mistake and it’s long past time that the blinkers came off. We should recognize that cane juice rhums, whatever their sources – and perhaps especially those from the tiny distilleries – are deserving of greater acknowledgement and respect than they get from outside Europe or the cognoscenti. 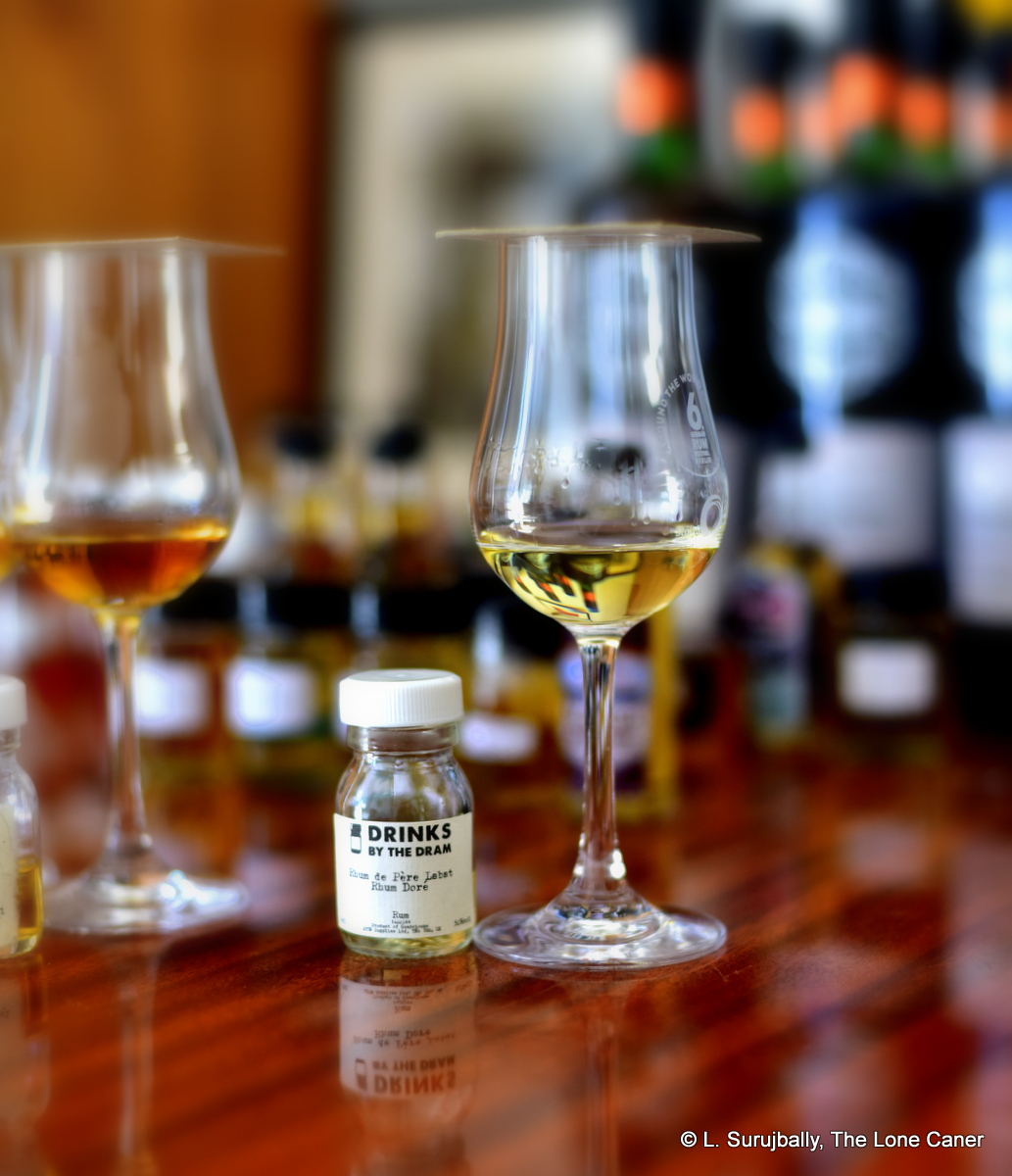 And that being the case, I pick another one here, from the small island of Marie Galante; and have to state flat out that even though you may not aware of it, for the intersection of taste, availability, longevity, age and all round taste, the Dore really is rather remarkable precisely because it doesn’t seem to be anything of the kind. The Soleil 59º and 55º show their youth in their rough edges and wildly untamed exuberance, and so to some extent do the unaged blancs, though they are really fine in their own bailiwick. The older mid-range 3 YO and 8 YO expressions are too weak to be serious contenders as they fall flat or fly away if one doesn’t pay close attention, and the high-end millesimes are too pricey. The Dore somehow, against all odds, even young as it is, finds its niche with effortless ease, shows its quality and retains its place in the mind…and is, I believe, completely worthy of inclusion in this series as a result.