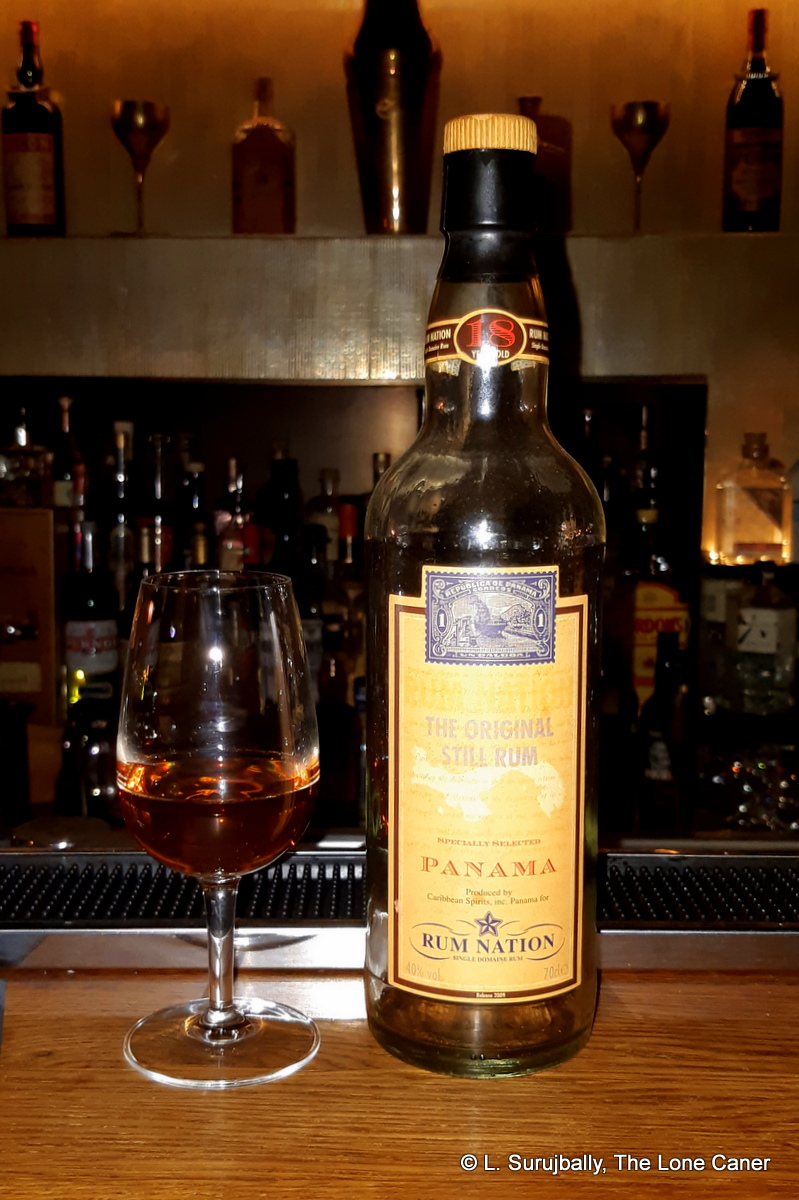 The Rum Nation Panama 2009 edition exists in a peculiar place of my mind, since it’s the unavailable, long-gone predecessor of the 18 YO Panamanian which RN released in 2010; this in turn was one of the first Panamanian rums that I had tried that wasn’t an indifferently blended bland blah, that possessed more years and complexity than I had heretofore experienced, and was an all round lovely drink…or so I thought at the time. Nearly a decade later, my opinions of Panamanian rums is no longer so stellar: but in all honesty, to see a rum from Rum Nation that predates the current age of rum we’re living in is reason enough sometimes, to just grab the bottle, whip out the notebook, and spend an hour or so putting the pour through its paces.

Rum Nation itself needs no introduction, though you can read the bio of the company Fabio Rossi founded in 1999 and sold in 2019 here if you’re interested. They have always had three kinds of rums: [i] the ‘starter’ rums [ii] the multi-decade-old Demeraras and Jamaicans, and [iii] the Rare Collection of upscale limited releases. Especially in the starters, there have always been justified grumbles and accusations about dosage, however minor, but of late this practice has been discontinued. I was unable to test this one, unfortunately, but based on how it profiled, I would suggest that yes, it had a little something extra, just not enough to make it a competitor for AH Riise.

That dealt with, let’s get right into the rum. Considering the nose and the smell, the first word I wrote was “light.” It had a nice mixup of bitter tree bark, strong black tea, crushed walnuts, and a nice layering of butterscotch, vanilla and salted caramel. It developed with further hints of leather, some smoke, light molasses and seemed to be a completely decent exemplar of the lighter latin column-still style that was so in favour when it was made and now so disregarded, by so many. For its strength, 40%, I quite liked it.

That was the smell, but what did it taste like? Eighteen years in a barrel must, after all, show its traces. To some extent, yes: again, light is the operative word, though gentle can work too. Nuts, leather and butterscotch, a bit of brine and molasses started the party going. The other band members joined in later – vanilla, white guavas, figs papaya, watermelons, watery pears, and even coconut shavings, cloves, white chocolate, almonds and molasses. But in spite of these good beginnings, they just started big…and then dropped rapidly off a cliff. All those tastes literally disappeared in seconds, and made a mockery of the finish, which only displayed a short, briny aftertaste of peanut butter, almonds and caramel. Essentially, not much action in the jock and you can see how far the rum world has progressed when you compare something like this to today’s solid offerings.

In fine, the 40% strength is part of the problem, and it’s it’s too thin, too wispy, too fleetingly easy. I suppose it can be classed as a soft evening sipper but even within that quiet profile there’s too little going on, and I remember liking the 2010 edition much more – but then, those were more innocent times and we had experienced less. The Rum Nation 2009 says rather more about my changing tastes than about itself. Up to about 2014 I liked 40% blends and the smooth slinky Central American rums from Panama and Nicaragua quite a bit. For example, Rum Nation’s own 21 YO Panamanian scored 89 points in early 2013; another high point came with the Panamonte XXV, to which I awarded what would be a now-unthinkable 87 points that same year; and the last one I remember scoring that well was the Peruvian Ron Cartavio XO at 88 a year later. But by then I had started gravitating towards stronger, clearer and more forceful rums that tasted off the scale and gradually moved away from the somnolent ease of the Spanish style.

Had I tried this Rum Nation product back at the beginning, I believe 84-86 points would have been its lot: now, with so many years of trying, tasting, and thinking about rums from all points of the compass, it ranks higher for providing a window to the world of Ago than purely for taste and enjoyment (although I did like it enough, let me be clear about that). It’s a rum from those uncritical uncynical times at the dawn of the rum renaissance and deserves to be written about in that vein…but alas, the big-eared, bright-eyed and bushy-tailed newb who should do that has left the building…and his successor is a little harder to please.

As far as I know, the rum stock comes from Varela Hermanos, who make the Abuelo brand, and aged in American oak ex-bourbon barrels. Awaiting some feedback from Fabio Rossi, and will update the post if needed.