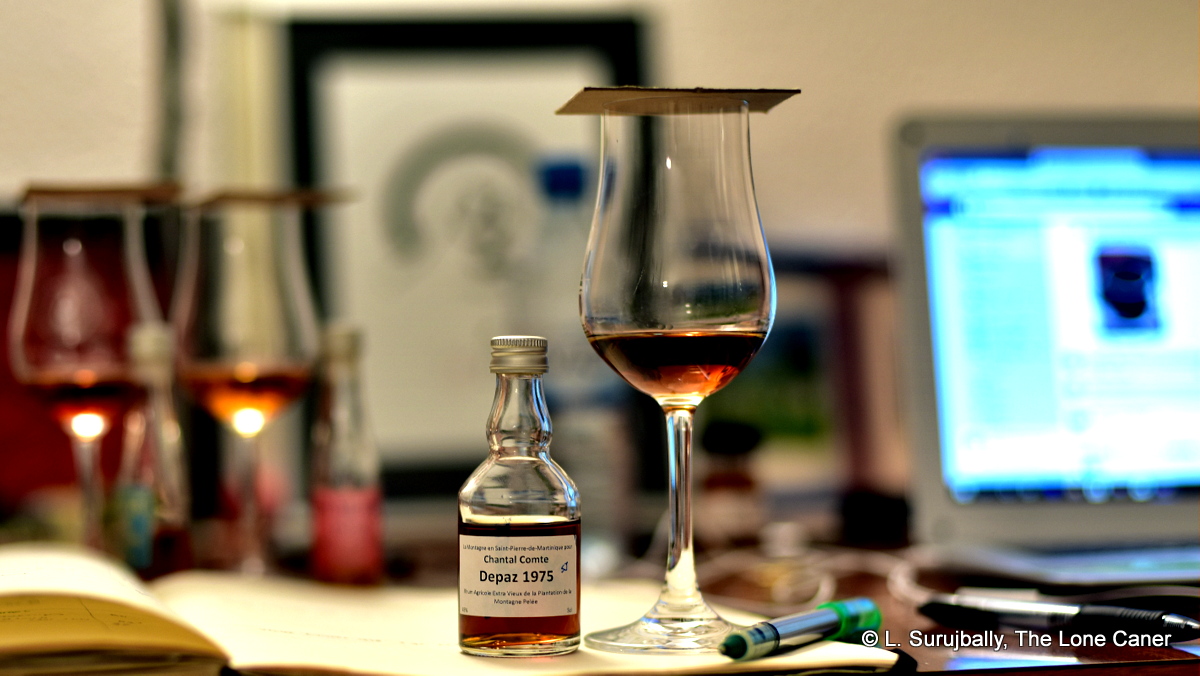 In a time of exploding visibility of masterful ladies in the rum world – Joy Spence, Maggie Campbell, Trudiann Branker, Karen Hoskins, Dianne Medrano, and so many others – it’s good to also remember Chantal Comte, who bottled her first rum in 1983 (it was a Depaz, and possibly even this one, though I’m still tracking that down), who has fiercely and doggedly stuck with her first love of the French islands’ rums in all the years from then to now. She is, in my opinion, along with Tristan Prodhomme, one of the undiscovered treasures of the indie bottling scene.

Yet her rhums remain peculiarly elusive: it’s rare to find a review of anything the woman has released, let alone any of the older bottlings, and this in spite of the fact that the quality of her wares is beyond dispute. A few years ago a newspaperman in Trinidad wrote about a secret handshake that united the underground lovers of Luca’s Caronis, but the statement really should be applied to hers – and most especially for the one she herself considers her favourite, the Depaz 1975, which is almost as good as the utterly spectacular Trois Rivieres 1980 I was fortunate enough to find all those years ago.

The full and rather unwieldy title of the rum today is the Chantal Comte Rhum Agricole 1975 Extra Vieux de la Plantation de la Montagne Pelée, but let that not dissuade you. Consider it a column-still, cane-juice rhum aged around eight years, sourced from Depaz when it was still André Depaz’s property and the man was – astoundingly enough in today’s market – having real difficulty selling his aged stock. Ms. Comte, who was born in Morocco but had strong Martinique familial connections, had interned in the wine world, and was also mentored by Depaz and Paul Hayot (of Clement) in the late 1970s and early 1980s, when Martinique was suffering from overstock and poor sales.. And having access at low cost to such ignored and unknown stocks allowed her to really pick some amazing rums, of this is one.

Still, if we disregard the bottle and just do the pour, the mud-brown liquid does not, at the inception, inspire. That misleading first impression lasts about as long as it takes the nose to take the first sniff. Because it’s thick, it’s fruity, it’s juicy and it feels solid enough to get your teeth into. The whole thing is a smorgasbord of fruits – ripe pineapple and mangoes for sure, pears, white guavas and papaya (all the light hits of the agricole pantheon)…but also more dark fruits than we usually associate with rhums – black grapes, kiwi fruits, rich plums, dates. No tartness here, though a whiff of citrus peel pervades the background, just a combined fruit smoothie in harmonious combination with a trace of molasses, cereal and chocolate brownies

And that’s not all: the palate is equally complex and well-crafted, and at 45% – usually a middling strength which can be too soft or delicate or thin if done indifferently or badly – it expands the tableaux of observable notes. It melds the soft smell of old leather satchels with pears, herbs, spices, coffee grounds and a touch of brine, and if you hang around long enough the light acidity of citrus peel and tartness of sour cream coil behind and lend some texture and depth. Which is to say nothing of the delicate grassiness and softer caramel hints that you can almost, but not quite, taste – they are sensed rather than experienced, and just enhance the supple, smooth drinking experience. I would have preferred the finish to be a little longer and perhaps a shade more emphatic, but overall, the closing notes of prunes, apricots, ginger, 5-spice and light sugar water was quite enough to give the rhum a lovely, low-key send off.

Clearing away the dishes – this is not a rum that revels in strength and furious points of power. It lacks decisive and clearly discernible tastes like funk or woodsiness. What it does do, and well, is subtly combine the component profiles while at all times allowing the drinker to pick up some element that pleases, and identify it precisely within the amalgam. It’s interesting that Ms. Comte remarked once that she felt a product (rums) so complex and of such quality could not – should not! – possibly be overlooked or despised the way it was, just around the same time as Luca Gargano was coming to similar conclusions over at Saint James: one gets the impression she’s followed that principle ever since, of not worrying about singular taste profiles, but more pleasing symphonic harmonies.

Anyway, the Depaz 1975 is, at end, a rum that reminds us what a long journey agricoles have made since back in the 1980s when it came out. It starts off by seeming quite ordinary, an agricole like many others we’ve tried — then it gathers force and power, it gets better with every passing sip, and by the time you’re done it will take its place as one of those rums you can’t imagine yourself forgetting. Deservedly so, in my opinion, for here is one of a series of bottlings which raised the bar for the French Caribbean islands, indie bottlings and La Maison de Chantal, and forced everyone to sit up and pay attention. We have never forgotten, and they have never looked back, and that’s all as it should be.